PARLEMENT EUROPEEN - Réponse à question E-001442-17 Risks posed by using pesticides on bees and other species. Despite partial limitations imposed by the Commission in 2013(1) on the use of specific pesticides classified as harmful for populations of insects and living organisms, concerns over the constant decline of bee population are increasing, as bees play a crucial role in pollinating plants and environmental balance in general. 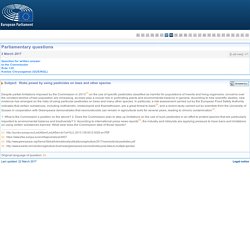 According to new scientific studies, new evidence has emerged on the risks of using particular pesticides on bees and many other species. In particular, a risk assessment carried out by the European Food Safety Authority indicates that certain substances, including clothianidin, imidacloprid and thiamethoxam, are a great threat to bees(2), and a recent study carried out by scientists from the University of Sussex in cooperation with Greenpeace demonstrates that neonicotinoids can remain in agricultural soils for several years, leading to chronic contamination(3). 1. What is the Commission’s position on the above? Diminution du nombre d'abeilles - E-3915/2009. Recrudescence de la mortalité chez les abeilles à l'échelle mondiale - E-1387/2008. 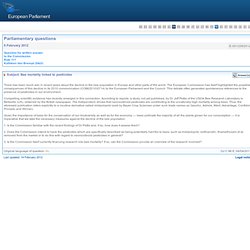 The European Commission has itself highlighted the possible consequences of this decline in its 2010 communication (COM(2010)0714) to the European Parliament and the Council. This debate often generates spontaneous references to the presence of pesticides in our environment. Compelling scientific evidence has recently emerged in this connection. PARLEMENT EUROPEEN 25/04/13 Réponse à question E-004617-13 Measures to protect bees and other insects against certain pesticides.

On 15 March 2013 the Commission proposed a two-year ban on the use of pesticides called neonicotinoids, which are toxic to bees and other pollinators. 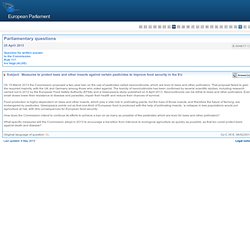 Bee deaths in the Union have reached dramatic levels and the use of pesticides is in many ways responsible for this development. 1. 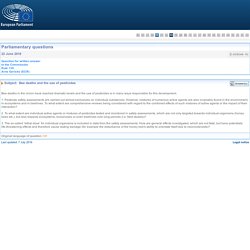 Pesticide safety assessments are carried out almost exclusively on individual substances. However, mixtures of numerous active agents are also invariably found in the environment, in ecosystems and in beehives. To what extent are comprehensive reviews being considered with regard to the combined effects of such mixtures of active agents or the impact of their interaction? PARLEMENT EUROPEEN - Réponse à question E-007887-16 Bayer's pesticides kill bees.