EUROPA_EU 15/01/18 COMMISSION STAFF WORKING DOCUMENT EXECUTIVE SUMMARY OF THE REFIT EVALUATION of the General Food Law (Regulation (EC) No 178/2002) Introduction As part of its 'Smart Regulation' policy, the Commission has initiated a Regulatory Fitness and Performance Programme (REFIT). 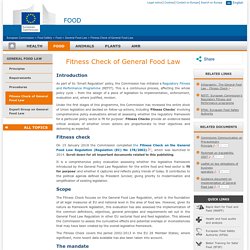 This is a continuous process, affecting the whole policy cycle – from the design of a piece of legislation to implementation, enforcement, evaluation and, where justified, revision. Under the first stages of this programme, the Commission has reviewed the entire stock of Union legislation and decided on follow-up actions, including 'Fitness Checks' involving comprehensive policy evaluations aimed at assessing whether the regulatory framework for a particular policy sector is 'fit for purpose'.

Fitness Checks provide an evidence-based critical analysis of whether Union actions are proportionate to their objectives and delivering as expected. Fitness check On 15 January 2018 the Commission completed the Fitness Check on the General Food Law Regulation (Regulation (EC) No 178/2002), which was launched in 2014. Scope The mandate Method Main findings. PARLEMENT EUROPEEN - Réponse à question E-007081/2017 Liability of private laboratories within the meaning of Regulation 882/2004(EU) and Member States' reporting obligations under Directive 2015/1535(EU) 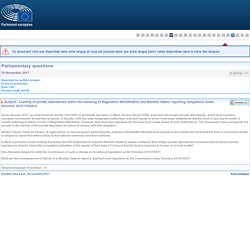 Section 6(b)(3) of the amended Act obliges private laboratories, which food business operators commission to test their products, to directly notify the state-designated authorities of all test results in which it has been established that the food is injurious to health or unsafe (referring to Article 3(1)(d) of Regulation 882/2004). However, food business operators do not have to be made aware of such notifications. The amendment does not specify the penalty or the liability of the private laboratory for failure to comply with that obligation. Section 6(b)(3) reads as follows: ‘A legal person or natural person performing the analysis of foodstuffs intended to be placed on the market who finds that the food is injurious to health is obliged to report this without delay to the national veterinary and food authority.’ PARLEMENT EUROPEEN - Réponse à question E-006269-17 Food Crime. PARLEMENT EUROPEEN - Réponse à question E-008709-16 Dual-quality foodstuffs.

Recent press reports have again brought to light the issue of dual-quality foodstuffs, whereby foods sold in identical or similar packaging vary in their composition depending on where they are sold. 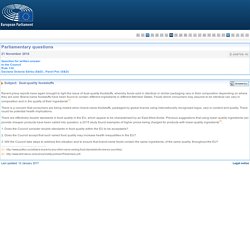 Brand-name foodstuffs have been found to contain different ingredients in different Member States. Foods which consumers may assume to be identical can vary in composition and in the quality of their ingredients(1). There is a concern that consumers are being misled when brand-name foodstuffs, packaged by global brands using internationally recognised logos, vary in content and quality. There could be potential health implications. PARLEMENT EUROPEEN - Réponse à question E-007889-16 Notifying national agencies of shipments of animal origin, unprocessed vegetables and unprocessed fruits. Legislation has recently been passed in Wales that requires all shops and businesses serving or selling food to display, at the entrance, a certificate of inspection by the local authorities regarding food hygiene and environmental health. 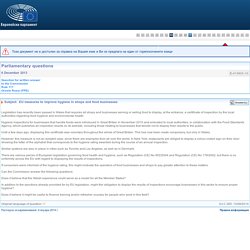 Hygiene inspections for businesses that handle foods were introduced in Great Britain in November 2010 and entrusted to local authorities, in collaboration with the Food Standards Agency, which publishes all inspection results on its website, including those relating to businesses that decide not to display their results to the public. Until a few days ago, displaying this certificate was voluntary throughout the whole of Great Britain. This has now been made compulsory, but only in Wales. However, this measure is not an isolated case, since there are examples from all over the world.

Similar systems are also in place in cities such as Toronto and Los Angeles, as well as in Denmark. Can the Commission answer the following questions: PARLEMENT EUROPEEN - Réponse à question E-002595-16 New food scandal. EFSA 01/06/16 D'allergène à zoonotique: un glossaire multilingue de termes scientifiques. PARLEMENT EUROPEEN - Réponse à question E-000262-16 Food safety (concerne les échanges avec les Etats-Unis) PARLEMENT EUROPEEN - Réponse à question E-005065-15 Toxicity of food products on the European market. Approximately 3% of the food products on the European market have been found to contain pesticides in an amount that exceeds the legal limit, and in half of those cases, even when measurement uncertainties were taken into account, the amount recorded was much higher than that permitted. 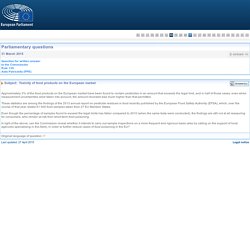 These statistics are among the findings of the 2013 annual report on pesticide residues in food recently published by the European Food Safety Authority (EFSA), which, over the course of that year, tested 81 000 food samples taken from 27 EU Member States. Even though the percentage of samples found to exceed the legal limits has fallen compared to 2010 (when the same tests were conducted), the findings are still not at all reassuring for consumers, who remain at risk from short-term food poisoning. JOUE 04/05/13 Décision d’exécution de la Commission du 3 mai 2013 sur le financement du programme de travail pour 2013 concernan. 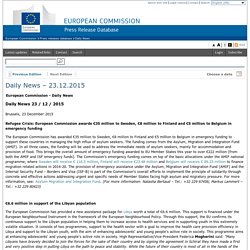 The funding comes from the Asylum, Migration and Integration Fund (AMIF). In all three cases, the funding will be used to address the immediate needs of asylum seekers, mainly for accommodation and provision of food. This brings the overall amount of emergency funding awarded to EU Member States this year to over €222 million (from both the AMIF and ISF emergency funds). The Commission's emergency funding comes on top of the basic allocations under the AMIF national programme, where Sweden will receive € 118.5 million, Finland will receive €23.48 million and Belgium will receive € 89.25 million to finance migration related actions in 2014-20.