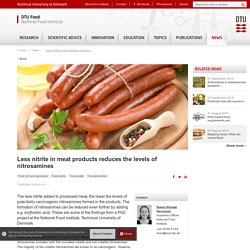 <p>In a study conducted by the Finnish Food Safety Authority Evira, it was found that in Finland the nitrite intake from foods and household water exceeded the acceptable daily intake for about 14% of children aged 3 and 11% of children aged 6. 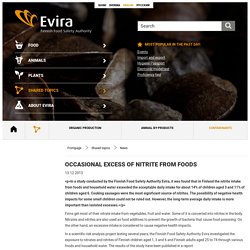 Cooking sausages were the most significant source of nitrites. The possibility of negative health impacts for some small children could not be ruled out. However, the long-term average daily intake is more important than isolated excesses. </p> Finns get most of their nitrate intake from vegetables, fruit and water. In a scientific risk analysis project lasting several years, the Finnish Food Safety Authority Evira investigated the exposure to nitrates and nitrites of Finnish children aged 1, 3 and 6 and Finnish adults aged 25 to 74 through various foods and household water. Nitrates mostly from fruit, vegetables and household water Most of the intake of nitrates comes from natural sources such as vegetables, fruit and water. BFR 11/06/13 Frequently Asked Questions on nitrate and nitrite in food. FAQ by the BfR of 11 June 2013 Lettuce and vegetables such as rocket, spinach, kohlrabi, beetroot and radish can contain high quantities of nitrate. 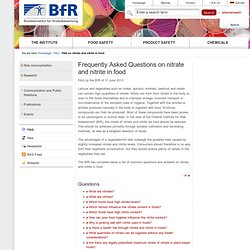 Nitrite can form from nitrate in the body or even in the foods themselves due to improper storage, incorrect transport or non-observance of the standard rules of hygiene. Together with the amines or amides produced naturally in the body or ingested with food, N-nitroso compounds can then be produced. Most of these compounds have been proven to be carcinogenic in animal tests. ATSDR_CDC_GOV - Projet de recherche 2013-2015 - What Are U.S. Standards and Regulations for Nitrates and Nitrites Exposure? 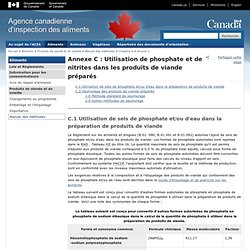 Remarques. FSAI 19/06/12 Use and removal of nitrite in meat products. What are nitrates and nitrite? 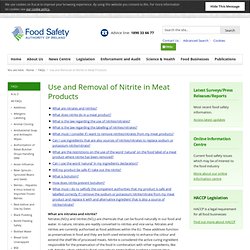 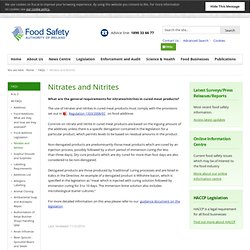 The use of nitrates and nitrites in cured meat products must comply with the provisions set out in Regulation 1333/2008/EC on food additives Controls on nitrate and nitrite in cured meat products are based on the ingoing amount of the additives unless there is a specific derogation contained in the legislation for a particular product, which permits levels to be based on residual amounts in the product. Non-derogated products are predominantly those meat products which are cured by an injection process, possibly followed by a short period of immersion curing (for less than three days). Dry cure products which are dry cured for more than four days are also considered to be non-derogated. Derogated products are those produced by ‘traditional’ curing processes and are listed in italics in the Directive. For more detailed information on this area please refer to our guidance document on the legislation.

EFSA 11/05/10 Nitrites in meat products. EFSA Journal 2010; 8(5):1538 [12 pp.]. doi:10.2903/j.efsa.2010.1538 Type: Statement of the Scientific Committee/Scientific Panel On request from: European Commission Question number: EFSA-Q-2010-00097 Adopted: 11 March 2010 Published: 11 May 2010 Affiliation: European Food Safety Authority (EFSA), Parma, Italy The Panel on Food Additives and Nutrient Sources added to Food assess the data provided by the Danish authorities, evaluating in particular whether this information, or any other new scientific developments, indicate that there is scientific evidence for a revision of the maximum limits on nitrites in food adopted in Directive 2006/52/EC. 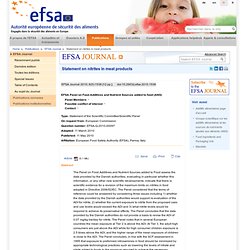 . © European Food Safety Authority, 2010 The Panel concludes that the data provided by the Danish authorities do not provide a basis to revise the ADI of 0.07 mg/kg bw/day for nitrite. The Panel notes that in several European countries the mean exposure at Tier 2 is above the ADI.