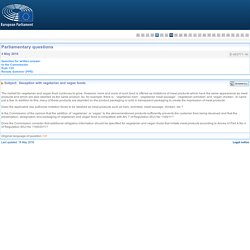 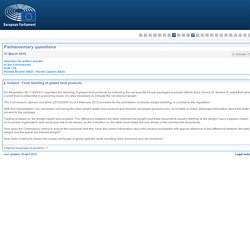 Annex IX, Section 5, notes that when a solid food is presented in a covering liquid, it is also necessary to indicate the net drained weight. The Commission Opinion (ref. Ares (2015)538413) of 9 February 2015 provides for the prohibition of double weight labelling, in contrast to the regulation. With this interpretation, the consumer, not having the dual weight (water plus product) and drained net weight (product only), is not able to obtain adequate information about the water present in the package. PARLEMENT EUROPEEN - Réponse à question E-004339-15 The acceptability of selling the same type of food with different ingredients in different EU countries. PARLEMENT EUROPEEN - Réponse à question E-001118-15 Does food have a healing effect? EUROPE 16/05/12 Food: Commission adopts landmark list of permitted health claims . European Commission - Press release Food: Commission adopts landmark list of permitted health claims Brussels, 16 May 2012 – Health claims on food labelling and in advertising, for example on the role of calcium and bone health or vitamin C and the immune system, have become vital marketing tools to attract consumers' attention. 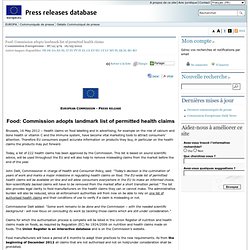 EFSA 31/05/11 Scientific and technical guidance for the preparation and presentation of an application for authorisation of a he. EFSA Journal 2011;9(5):2170 [36 pp.]. doi:10.2903/j.efsa.2011.2170 Type: Guidance of the Scientific Committee/Scientific Panel On request from: European Commission Question number: EFSA-Q-2007-066 , EFSA-Q-2011-00215 Adopted: 13 May 2011 Published: 31 May 2011 Affiliation: European Food Safety Authority (EFSA), Parma, Italy The European Commission has requested the European Food Safety Authority (EFSA) to issue an opinion on a scientific and technical guidance for applications for authorisation of health claims under Regulation (EC) No 1924/2006 on nutrition and health claims made on foods. 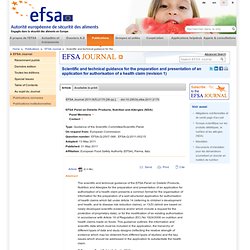 The Scientific Panel on Dietetic Products, Nutrition and Allergies (NDA) prepared a draft opinion which was published for public consultation. After considering all comments received, the Panel adopted its opinion on 06 July 2007. The guidance presents a common format to assist the applicant in the preparation of a well-structured application. DG SANCO 01/07/13 food safety - Health & Nutrition Claims - Commission Implementing Decision of 24 January 2013 adopting guideli. Requires javascript In December 2006, the Regulation on nutrition and health claims made on foods was adopted by the Council and Parliament. 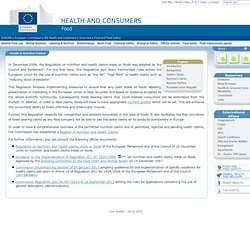 For the first time, this Regulation lays down harmonised rules across the European Union for the use of nutrition claims such as “low fat”, “high fibre” or health claims such as “reducing blood cholesterol”. This Regulation foresees implementing measures to ensure that any claim made on foods' labelling, presentation or marketing in the European Union is clear, accurate and based on evidence accepted by the whole scientific community. Consequently foods bearing claims that could mislead consumers will be eliminated from the market. In addition, in order to bear claims, foods will have to have appropriate nutrient profiles which will be set. 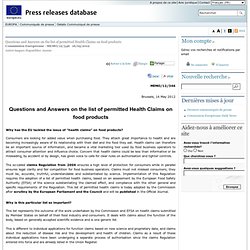 Consumers are looking for added value when purchasing food. They attach great importance to health and are becoming increasingly aware of its relationship with their diet and the food they eat. Health claims can therefore be an important source of information, and became a vital marketing tool used by food business operators to attract consumer attention and influence choice. The so-called claims Regulation from 2006 ensures a high level of protection for consumers while in parallel ensures legal clarity and fair competition for food business operators.