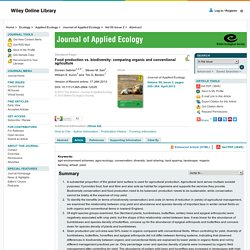 While a reduction in food waste, improvements in infrastructure and transport, a change in human diets and expanding aquaculture are important mitigation strategies against increased demand (Godfray et al. 2010), it has been argued that agricultural production has to increase globally to supply the food required for the estimated over nine billion people by 2050 (Foresight 2011; Tilman et al. 2011). Increasing supply logically has two axes: either via intensification (increasing output over the same area) or via extensification (bringing more land into agricultural production). Science of The Total Environment Volumes 545–546, 1 March 2016, A knowledge-based approach to estimating the magnitude and spatial patterns of potential threats to soil biodiversity. Open Access Highlights Soil microorganisms, fauna and biological functions are subjected to different potential threats It is possible to map potential threats to soil biodiversity The majority of EU countries have soils with high level of risk to soil biodiversity Soil under pressure is not well protected, actions are needed to preserve soil biodiversity Abstract Because of the increasing pressures exerted on soil, below-ground life is under threat. 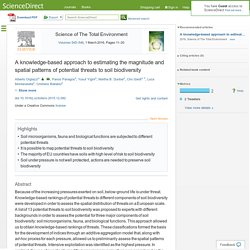 American-Eurasian J. Agric. & Environ. Sci., 14 (5): 407-420, 2014 Agroecosystems Management and Biodiversity Loss in an Intensification Gradient in Traditional Agriculture in Mexico. CGIAR - 2013 - Using agricultural biodiversity for pest and disease management. PLOS 25/02/14 Infectious Diseases and Their Outbreaks in Asia-Pacific: Biodiversity and Its Regulation Loss Matter. Abstract Despite increasing control measures, numerous parasitic and infectious diseases are emerging, re-emerging or causing recurrent outbreaks particularly in Asia and the Pacific region, a hot spot of both infectious disease emergence and biodiversity at risk. 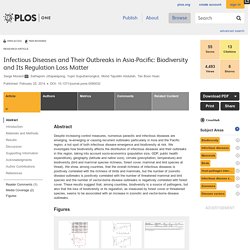 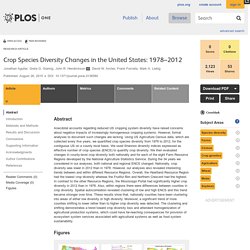 However, formal analyses to document such changes are lacking. Using US Agriculture Census data, which are collected every five years, we quantified crop species diversity from 1978 to 2012, for the contiguous US on a county level basis. We used Shannon diversity indices expressed as effective number of crop species (ENCS) to quantify crop diversity. We then evaluated changes in county-level crop diversity both nationally and for each of the eight Farm Resource Regions developed by the National Agriculture Statistics Service. FASTCODESIGN 11/05/12 Infographic: In 80 Years, We Lost 93% Of Variety In Our Food Seeds. 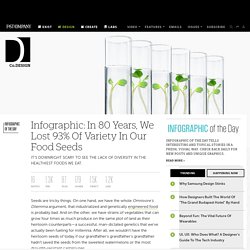 On one hand, we have the whole Omnivore’s Dilemma argument, that industrialized and genetically engineered food is probably bad. And on the other, we have strains of vegetables that can grow four times as much produce on the same plot of land as their heirloom counterparts—a successful, man-dictated genetics that we’ve actually been fueling for millennia. After all, we wouldn’t have the heirloom seeds of today if our grandfather’s grandfather’s grandfather hadn’t saved the seeds from the sweetest watermelons or the most drought-resistant cantaloupes. I don’t know that any of us can honestly assess the repercussions of our actions, but I do know one thing: This National Geographic infographic by John Tomanio is staggering. Using the metaphor of a tree, it charts the loss of U.S. seed variety from 1903 to 1983. Poster paper prepared for presentation at the EAAE 2014 Congress ‘Agri-Food and Rural Innovations for Healthier Societies’ August 26 to 29, 2014 IMPACT OF AGRO-BIODIVERSITY ON FARMERS’ INCOME PROBABILITY DISTRIBUTION.

Justus-Liebig-University Giessen - 2014 - Agrobiodiversity, Cultural Factors and their Impact on Food and Nutrition Security: VVB LAUFERSWEILER VERLAG édition scientifique - A case-study in the south-east region of the Peruvian Andes. Indian Journal of Hill Farming 25(2):37-40 DEC 2012 Biodiversity of Agriculturally Important Insects in North Eastern Himalaya: An Overview. Ecology and Society 18(4): 71 2013 Biocultural Refugia: Combating the Erosion of Diversity in Landscapes of Food Production. Nature 405, 234-242 (11 May 2000) Consequences of changing biodiversity. 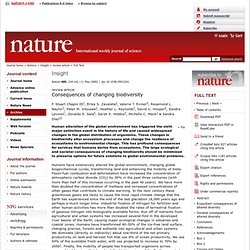 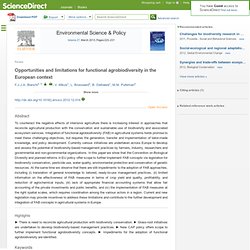 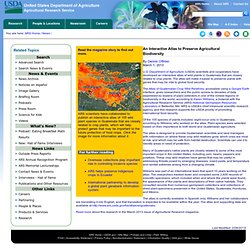 Department of Agriculture (USDA) scientists and cooperators have developed an interactive atlas of wild plants in Guatemala that are closely related to crop plants. The atlas will make it easier to preserve plants with genes that may be vital to global food security. DEFRA - OCT 2013 - Genetic biodiversity in agricultural and natural systems: Measurement, understanding and management. Sustainability 2011, 3, 238-253 Agricultural Biodiversity Is Essential for a Sustainable Improvement in Food and Nutrition Secur. PNAS 21/09/12 The compatibility of agricultural intensification in a global hotspot of smallholder agrobiodiversity (Bolivia) IFOAM 06/05/13 Seed legislation must be fit for agro- biodiversity - EU Parliament and Council need to significantly revise draf.

FAO 28/04/12 Agricultural Biodiversity to Improve Nutrition Food Security - New Project Supported by Global Environmental Facili. A nutritionally adequate diet must be composed of a variety of foods, with biodiversity being the key. 28 April, 2012, Rio de Janeiro - A project aimed at using research and education to tackle growing global concerns over the negative health implications of poor nutrition and also improve food security was officially launched during the World Nutrition Rio Congress 2012 in Rio today. 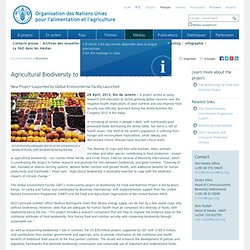 A narrowing of variety in people's diets, with nutritionally-poor processed foods dominating the dinner table, has led to a raft of health issues. One third of the world's population is suffering from hunger and micronutrient malnutrition, while obesity and diet-related chronic illnesses have reached critical levels. FAO's principal nutrition officer Barbara Burlingame notes that dietary energy supply can be met by a few staple crops only, without biodiversity. Environmental Science & Policy Volume 23, November 2012, Biodiversity and agriculture: Production frontiers as a framework for e. Abstract Increasing global demand for agricultural products will continue to affect biodiversity. 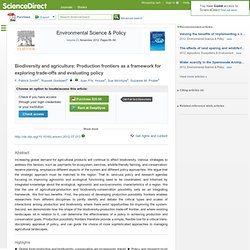 Various strategies to address this tension, such as payments for ecosystem services, wildlife-friendly farming, and conservation-reserve planning, emphasize different aspects of the system and different policy approaches. We argue that the strategic approach must be matched to the region. Agriculture, Ecosystems & Environment Volume 157, 15 August 2012, Introduction to special issue on agricultural biodiversity, ec.

NEW AGRICULTURIST - JANV 2012 - Realising the benefits of enhanced agrobiodiversity. The Global Forum on Agricultural Research (GFAR) brings together all those working to strengthen and transform agricultural research for development around the world. As part of this role, GFAR is working with New Agriculturist to showcase and raise awareness of important initiatives and their outcomes, to update and inspire others. Underutilised crops must be retained and promoted© FAO/Olivier Asselin The catastrophic failure of grain harvests in 2008 and subsequent price hikes for rice and wheat provided dramatic evidence for the fragility of both agricultural production and the wider food economy in many developing countries. FARMERS'FORUM - INDIA'S AGRICULTURE MAGAZINE 26/01/12 Agro-Biodiversity For Food Security. AGROFORESTRY WORLD 21/09/12 How policies and laws influence agrobiodiversity. Platform for Agrobiodiversity Research

Bioversity International - Agrobiodiversity Conservation and Use in Asia, Pacific and Oceania region.