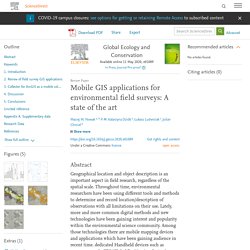 Basis of GIS field mapping methods Field survey suite usually consist of handheld device which is compatible with mobile mapping software and equipped with GNSS receiver and antenna. GNSS refers to constellation of satellites which provides signals from Earth's orbit with positioning and timing data to dedicated receivers. Then receivers are able to determine their location thanks to transmitted data. Examples of GNSSs include European Galileo, the US NAVSTAR Global Positioning System (GPS), Russian Global'naya Navigatsionnaya Sputnikovaya Sistema (GLONASS) and Chinese BeiDou Navigation Satellite System. The search result of the ‘GPS’ entry in the Environmental Science journal category in the SCOPUS database shows a steady increase in the use of GNSS devices in research (Fig. 1a). Fig. 1. a. 2.2. In this chapter, we present selected mobile mapping apps. UNWATER 21/11/19 Drought relief for farmers using real-time data. Satellite data combined with ground measurements has recently been used to assess and mitigate drought damage to crops in the area. 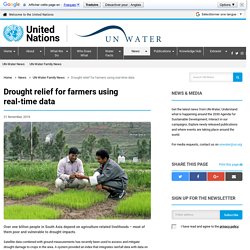 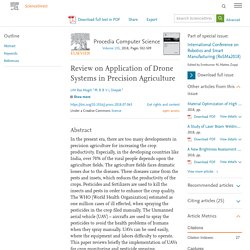 Food security will be increasingly challenged over the coming decades, due in part to growing populations, changing diets, and climate change. 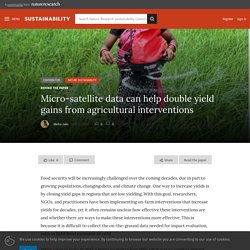 One way to increase yields is by closing yield gaps in regions that are low yielding. With this goal, researchers, NGOs, and practitioners have been implementing on-farm interventions that increase yields for decades, yet it often remains unclear how effective these interventions are and whether there are ways to make these interventions more effective. This is because it is difficult to collect the on-the-ground data needed for impact evaluation, such as field-level measures of yield. When I was in India in 2015, I began to realize how difficult it was to conduct impact evaluation at scale. I traveled around the state of Bihar with the international organization CIMMYT as they collected crop cut measures of yield, which is the gold standard for estimating field-level yields. NATURE 07/10/19 The impact of agricultural interventions can be doubled by using satellite data. Sustainable intensification has been proposed as one way to increase yields while minimizing environmental impacts by using inputs, such as fertilizer and irrigation, more efficiently1. 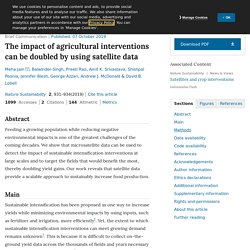 Yet, the extent to which sustainable intensification interventions can meet growing demand remains unknown2. This is because it is difficult to collect on-the-ground yield data across the thousands of fields and years necessary for large-scale impact evaluation3. Obtaining such data is particularly challenging in smallholder systems, as these face some of the largest yield gaps4. Recent advances in satellite technology, most notably microsatellites (<5 m, daily imagery), have the potential to be used to map field-level smallholder yields with little ground data5,6 at large spatiotemporal scales. KANSAS STATE UNIVERSITY - 2018 - Thèse en ligne: Applications of remote sensing in agriculture via unmanned aerial systems and satellites.

INSIDE UNMANNED SYSTEMS 09/03/20 How Will Drones Change Agriculture? Bottom line up front: I don’t have a sweeping, definitive answer to this question and anyone who says they do must have a time machine hidden somewhere. 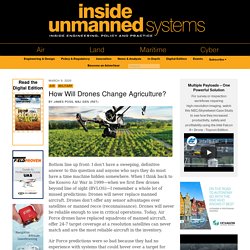 When I think back to the Kosovo Air War in 1999—when we first flew drones beyond line of sight (BVLOS)—I remember a whole lot of missed predictions: Drones will never replace manned aircraft. Drones don’t offer any sensor advantages over satellites or manned recce (reconnaissance). Drones will never be reliable enough to use in critical operations. Today, Air Force drones have replaced squadrons of manned aircraft, offer 24-7 target coverage at a resolution satellites can never match and are the most reliable aircraft in the inventory. Air Force predictions were so bad because they had no experience with systems that could hover over a target for weeks to deliver a missile with precision right when the target was vulnerable. Agricultural maps will be quick, cheap and 3D: Pre-drone mapping was a pain. There are my predictions. INFORMATION 11/11/19 A Review on UAV-Based Applications for Precision Agriculture. 1. 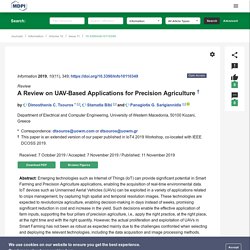 Introduction In the last five years, the total volume of investments in the agricultural sector has increased by 80%. The goal of these investments is to achieve productivity growth of at least 70% by 2050 [1] to meet the increased needs of the population of the Earth considering the fact that the area under cultivation will decrease. FARMONLINE_COM_AU 07/09/19 Hyper-accurate satellite systems for agriculture. Agribusiness is tapping into hyper-accurate satellite positioning systems to develop new services and improve farm productivity. 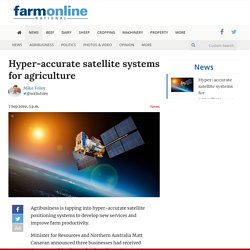 It increases the location accuracy of GPS, which is between 5 and 10 metres and takes it to 0.5m accuracy. That accuracy can be used in farming applications such as cattle tracking collars, where movement patters can indicate calving or illness, or in cropping rotations, border fencing and so on. FAO 09/12/19 Improve agriculture monitoring systems through satellite imagery for the Islamic Republic of Iran. CORNELL_EDU 23/10/19 Micro-satellites offer a fresh view of NYS agriculture. The seeds of space exploration are being planted in several New York state vineyards. 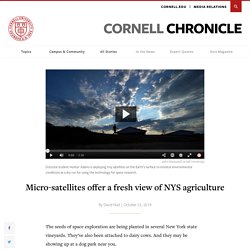 They’ve also been attached to dairy cows. And they may be showing up at a dog park near you. Doctoral student Hunter Adams is deploying thumbnail-size satellites to monitor environmental conditions as a dry run for using the technology for future space research. At the same time, he is harvesting valuable data that will help growers make more informed decisions about growing crops and caring for animals. Computers and Electronics in Agriculture Volume 154, November 2018, Soil sampling with drones and augmented reality in precision agriculture. 1. 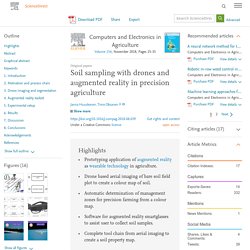 Introduction Today, most of the agricultural field work is carried out with human driven machines in broadacre farming. COLUMBIA UNIVERSITY 18/07/18 Pictures Worth a Thousand Words: How Satellite Imagery is Improving Agriculture in Developing Countries. AfSIS is working to promote food security and sustainable land management in African nations. Image: NASA By Lauren Harper and Andrea Meado From the first images of the whole earth to photos of Saturn’s rings cascading shadows on the gas giant’s surface, images from space have had a profound impact on people. Space exploration birthed remote sensing technologies and accelerated our understanding of Earth’s systems with the establishment of the National Aeronautics and Space Administration (NASA) in 1958. Shortly after, the NASA Goddard Institute for Space Studies in New York City (NASA GISS) was founded to conduct basic research in support of spaceflight.

ADVANCES IN FISH RESEARCH - 2019 - GIS APPLICATIONS IN FISH DISEASE MAPPING AND FORECASTING. Geospatial Health 7(2), 2013, pp. 369-374 Assessing bias associated with geocoding of historical residence in epidemiology research. QZ_COM 28/02/17 A new genetic tool maps how deadly viruses spread around the world in real time. GLOBAL CHALLENGES 10/01/17 Data, disease and diplomacy: GISAID's innovative contribution to global health. Abstract The international sharing of virus data is critical for protecting populations against lethal infectious disease outbreaks. Scientists must rapidly share information to assess the nature of the threat and develop new medical countermeasures. Governments need the data to trace the extent of the outbreak, initiate public health responses, and coordinate access to medicines and vaccines. Recent outbreaks suggest, however, that the sharing of such data cannot be taken for granted – making the timely international exchange of virus data a vital global challenge.

Researchers from the WorldPop project at the University have, for the first time, mapped estimated internal migration in countries across three continents; Africa, Asia and Latin America and the Caribbean. Professor Andy Tatem, Director of WorldPop, comments: "Understanding how people are moving around within countries is vital in combating infectious diseases like malaria. The parasite which causes the disease can be quickly reintroduced to a malaria free area by highly mobile populations. "Having an accurate overview of how different regions of countries are connected by human movement aids effective disease control planning and helps target resources, such as treated bed nets or community health workers, in the right places.

PLOS 10/07/15 A Spatial Analysis of Rift Valley Fever Virus Seropositivity in Domestic Ruminants in Tanzania. Abstract. SPACE NEWS 20/05/15 NASA Enlists Satellites To Watch for Harmful Algal Blooms. In August 2014, city officials in Toledo, Ohio warned 400,000 residents not to drink, cook with or bathe in the city’s tap water for three days due to an algal bloom in Lake Erie that tainted water flowing into the city treatment plant. ECDC 19/05/15 New GIS tool for disease mapping launched. Proceedings of WHO Consultation on Development and Application of Geographical Methods in the Epidemiology of Zoonoses, Germany, May 01/1994 Application of GIS in animal disease control-possibilities and limits. UNIVERSITY OF MARYLAND - 2014 - Spatio-Temporal Disease Tracking Using News Articles. Global Journal of Environmental Research - Volume 7 Number 1, 2013 - The Use of Multi Metric Index for Pollution Detection by Us. Biology & control of vector-borne infections in Europe.

EDENext, Biology and control of vector-borne infections in Europe, is a research project bringing together 46 international teams dedicated to investigating the biological, ecological and epidemiological components of vector-borne disease introduction, emergence and spread, and the creation of new tools to control them. For more details on the EDENext project itself visit the project website www.edenext.eu. VMERGE started in December 2012, and runs for three years. International Journal of Health Geographics 2011, 10:35 Geographic profiling as a novel spatial tool for targeting infectious di. The Ohio State University - Présentation : Supramap: Weather maps for infectious diseases based on analysis of genomic and geogr. HEALTHGIS - NOV 2012. J Vector Borne Dis 49, December 2012, pp. 197–204 The role of Remote Sensing and GIS for spatial prediction of vector-borne dise.