FORENSIC SCIENCES 13/11/21 Has the Lack of a Unified Halal Standard Led to a Rise in Organised Crime in the Halal Certification Sector? All articles published by MDPI are made immediately available worldwide under an open access license. 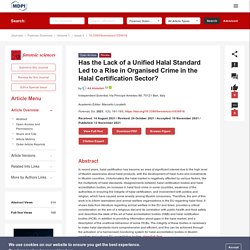 Italian Journal of Food Safety 12/12/19 Evaluation of the animal welfare during religious slaughtering. PARLEMENT EUROPEEN - Réponse à question E-004052/2019 Infringement of European animal rights legislation (abttage rituel) PARLEMENT EUROPEEN - Réponse à question E-003903/2019 Labelling of halal-certified products. ANIMALS 05/08/19 Halal Criteria Versus Conventional Slaughter Technology. Received: 30 May 2019 / Revised: 30 July 2019 / Accepted: 3 August 2019 / Published: 5 August 2019 While legislation can be implemented, amended or revoked according to the requirements of a given time period, this is very difficult or even impossible with religious laws due to their sanctity. 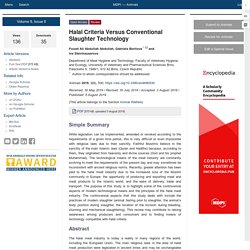 Faithful Muslims believe in the sanctity of the main Islamic laws (Quran and Hadiths) because, according to them, they originated from heavenly and divine sources (God and his prophet Muhammad). The technological means of the meat industry are constantly evolving to meet the requirements of the present day and may sometimes be inconsistent with ancient religious norms. Recently, greater attention has been paid to the halal meat industry due to the increased size of the Muslim community in Europe; the opportunity of producing and exporting meat and meat products to the Islamic world; and the ease of delivery, trade and transport. MDPI and ACS Style Abdullah, F.A.A.; Borilova, G.; Steinhauserova, I. GOV_UK - FEV 2019 - Results of the 2018 FSA Survey into Slaughter Methods in England and Wales. PARLEMENT EUROPEEN - Réponse à question E-005800-18 Ritual slaughter. PARLEMENT EUROPEEN - Réponse à question E-002867-18 Need for additional measures for implementation by the Member States of Council Regulation (EC) No 1099/2009 and the option or obligation to introduce specific methods of animal slaughter.

COURT OF JUSTICE OF THE EUROPEAN UNION 29/05/18 The Court confirms that ritual slaughter without stunning may take place only in an approved slaughterhouse. Food Policy Volume 69, May 2017, Illegal activity in the UK halal (sheep) supply chain: Towards greater understanding. FOOD ETHICS - JANV 2017 - Halal Meat Fraud and Safety Issues in the UK: a Review in the Context of the European Union. PARLEMENT EUROPEEN - Réponse à question P-002607-17 Slaughter without stunning.

On 29 March, the Flemish Government reached agreement on a total ban on slaughter without stunning. 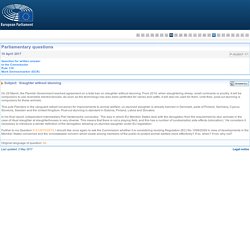 From 2019, when slaughtering sheep, small ruminants or poultry, it will be compulsory to use reversible electronarcosis. As soon as the technology has also been perfected for calves and cattle, it will also be used for them. Until then, post-cut stunning is compulsory for these animals. This puts Flanders in the vanguard (albeit not alone) for improvements to animal welfare: un-stunned slaughter is already banned in Denmark, parts of Finland, Germany, Cyprus, Slovenia, Sweden and the United Kingdom. Post-cut stunning is standard in Estonia, Finland, Latvia and Slovakia. In his final report, independent intermediary Piet Vantemsche concludes: ‘The way in which EU Member States deal with the derogation from the requirement to stun animals in the case of ritual slaughter at slaughterhouses is very diverse. PARLEMENT EUROPEEN - Réponse à question E-002155-16 Halal certification.

There was a controversy in Austria recently surrounding halal-certified products. 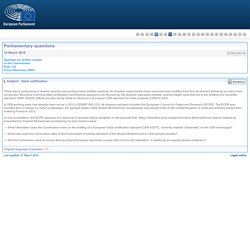 An Austrian supermarket chain removed halal-certified food from its shelves following an outcry from consumers. Business involving halal certification nevertheless appears to be flourishing: the Austrian standards institute recently began work that led to the drafting of a domestic standard, ONR 142000. Efforts are also being made to introduce a European CEN standard for halal products (CEN/TC 425). A CEN working party had already been set up in 2012 (CEN/BT WG 212). Its religious advisers included the European Council for Fatwa and Research (ECFR).

In one consultation, the ECFR opposed any stunning of animals before slaughter on the grounds that: ‘Many Scientifics [sic!] — What information does the Commission have on the drafting of a European halal certification standard CEN 425/TC, currently marked ‘disbanded’ on the CEN homepage? VETERINARIA ITALIANA - JANV/MARCH 2016 - Report on religious slaughter practices in Italy. Trends in Food Science & Technology. 10/2012; Halal assurance in food supply chains: Verification of halal certificates using audits and laboratory analysis. International Journal of Accounting and Business Management (Online), Volume 2, Issue 1 (April 2014) Perception of Non-Muslim Consumers towards Halal Products in Malaysia. Procedia - Social and Behavioral Sciences - Volume 121, 19 March 2014, People's Awareness on Halal Foods and Products: Potential Issues for Policy-makers. Volume 121, 19 March 2014, Pages 3–25 International Halal Conference InHAC 2012 Edited By Raja Suzana Raja Kasim, Mohamed Azam Mohamed Adil, Siti Khadijah Ab Manan and Fadilah Abd Rahman Abstract The concept of halal products or foods is now gaining a worldwide discussion due to its recognition as an alternative benchmark for safety, hygiene and quality assurance of what we consume or drink daily. 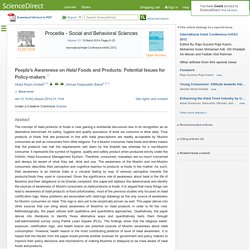 Thus products or foods that are produced in line with halal prescriptions are readily acceptable by Muslim consumers as well as consumers from other religions. Keywords. PARLIAMENT_UK 18/02/15 Religious Slaughter of Animals - Commons Library Standard Note. There has been growing public and parliamentary focus in the last year on methods used for religious slaughter, welfare concerns about whether animals are stunned before slaughter, which food outlets are serving halal meat as a matter of course to all customers, and whether all meat prepared by halal and kosha methods is being labelled as such. 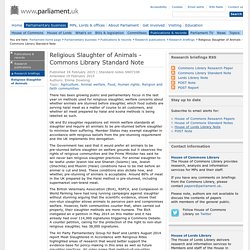