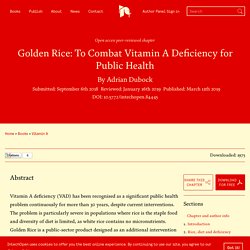 Introduction Research was initiated in the early 1990s which led in 2000 to the publication of the technology behind what came to be known as Golden Rice [1, 2]. From the outset, the intention was to create a source of vitamin A in the endosperm of rice, as an additional intervention for vitamin A deficiency. SCIENCEMAG 20/11/19 Bangladesh could be the first to cultivate Golden Rice, genetically altered to fight blindness. Soon. 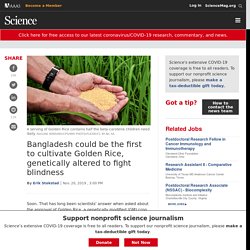 That has long been scientists' answer when asked about the approval of Golden Rice, a genetically modified (GM) crop that could help prevent childhood blindness and deaths in the developing world. Ever since Golden Rice first made headlines nearly 20 years ago, it has been a flashpoint in debates over GM crops. Advocates touted it as an example of their potential benefit to humanity, while opponents of transgenic crops criticized it as a risky and unnecessary approach to improve health in the developing world. PHILIPPINE RICE RESEARCH INSTITUTE - 2020 - Golden Rice - Frequently Asked Questions. What is Golden Rice? 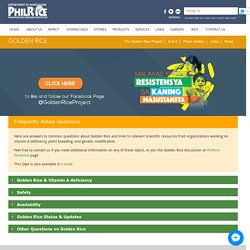 Golden Rice is a new type of rice that contains beta carotene, a precursor of vitamin A. This gives the grain the yellow-orange or gold color; hence, the name “Golden Rice”. Beta carotene is converted to vitamin A only as needed by the body; excess amount is excreted in natural way. This nutrient is also found in orange-colored fruits and vegetables like papaya, carrots, and squash. WASHINGTON UNIVERSITY IN ST.LOUIS 02/06/16 Genetically modified Golden Rice falls short on lifesaving promises - GMO activists not to blame for scientific challenges slowing introduction, study finds. Heralded on the cover of Time magazine in 2000 as a genetically modified (GMO) crop with the potential to save millions of lives in the Third World, Golden Rice is still years away from field introduction and even then, may fall short of lofty health benefits still cited regularly by GMO advocates, suggests a new study from Washington University in St. 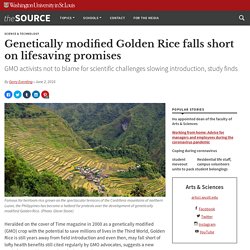 Louis. “Golden Rice is still not ready for the market, but we find little support for the common claim that environmental activists are responsible for stalling its introduction. GMO opponents have not been the problem,” said lead author Glenn Stone, professor of anthropology and environmental studies in Arts & Sciences. JOHNS HOPKINS UNIVERSITY PRESS 03/10/19 Golden Rice: The Imperiled Birth of a GMO Superfood.

Golden Rice was unusual both in its origin and gestation. 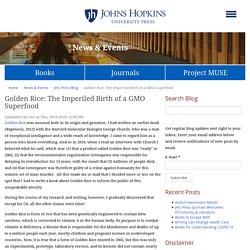 I had written an earlier book (Regenesis, 2012) with the Harvard molecular biologist George Church, who was a man of exceptional intelligence and a wide reach of knowledge. I came to regard him as a person who knew everything. And so in 2016, when I read an interview with Church I believed what he said, which was: (1) that a product called Golden Rice was “ready” in 2002, (2) that the environmentalist organization Greenpeace was responsible for delaying its introduction for 13 years, with the result that (3) millions of people died, and (4) that Greenpeace was therefore guilty of a crime against humanity for this wanton act of mass murder. All this made me so mad that I decided more or less on the spot that I had to write a book about Golden Rice to inform the public of this unspeakable atrocity. During the course of my research and writing, however, I gradually discovered that except for (3), all the other claims were false! 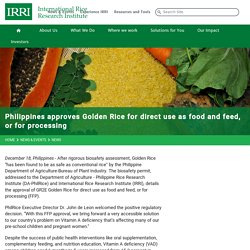 The biosafety permit, addressed to the Department of Agriculture - Philippine Rice Research Institute (DA-PhilRice) and International Rice Research Institute (IRRI), details the approval of GR2E Golden Rice for direct use as food and feed, or for processing (FFP). PhilRice Executive Director Dr. John de Leon welcomed the positive regulatory decision. “With this FFP approval, we bring forward a very accessible solution to our country’s problem on Vitamin A deficiency that’s affecting many of our pre-school children and pregnant women.”

GOLDENRICE - 2019 - Golden Rice Named Among Project Management Institute’s Most Influential Projects of the Last 50 Years. FOREIGNPOLICY 17/10/19 The True Story of the Genetically Modified Superfood That Almost Saved Millions - The imperiled birth—and slow decline—of Golden Rice. The cover of the July 31, 2000, edition of Time magazine pictured a serious-looking bearded man surrounded by a wall of greenery: the stems, leaves, and stalks of rice plants. 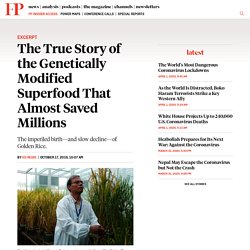 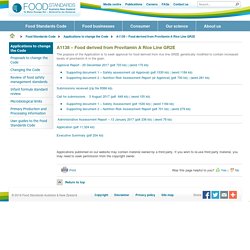 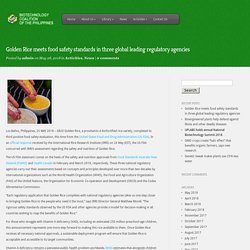 In an official response received by the International Rice Research Institute (IRRI) on 24 May (EST), the US FDA concurred with IRRI’s assessment regarding the safety and nutrition of Golden Rice. The US FDA statement comes on the heels of the safety and nutrition approvals from Food Standards Australia New Zealand (FSANZ) and Health Canada in February and March 2018, respectively.

These three national regulatory agencies carry out their assessments based on concepts and principles developed over more than two decades by international organizations such as the World Health Organization (WHO), the Food and Agriculture Organization (FAO) of the United Nations, the Organisation for Economic Co-operation and Development (OECD) and the Codex Alimentarius Commission.

Source: AAWSAT 24/03/20 Scientists Uncover Genetic Engineering Secret Behind Golden Rice Production. Scientists at the University of California have uncovered the secret behind the genetically engineered rice with high levels of beta-carotene, known as golden rice. 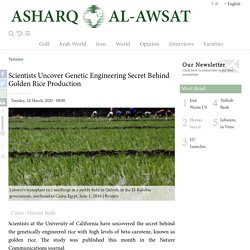 The study was published this month in the Nature Communications journal. Rice is a staple food crop for more than half the world's population. Golden Rice, a type of genetically engineered rice with high levels of beta-carotene, has been approved for consumption in more than five countries, including the Philippines, where vitamin A deficiency in children is widespread. Beta-carotene is not an important nutrient per se. But, the human body converts it into vitamin A, which is very important for the health of the skin, immune system, cellular membranes, and the eyes. With the conventional genetic engineering, the transgenes can integrate into random positions in the genome, which can result in reduced yields, and prioritize health benefits over the economic interest.

Dr. One of the research projects that Dr. PHYS_ORG 05/03/20 Genome editing strategy could improve rice, other crops. Scientists at UC Davis have used CRISPR technology to genetically engineer rice with high levels of beta-carotene, the precursor of vitamin A. The technique they used provides a promising strategy for genetically improving rice and other crops. The study was published today in the journal Nature Communications. NATURE 04/03/20 Marker-free carotenoid-enriched rice generated through targeted gene insertion using CRISPR-Cas9. Choosing gene insertion targets in a model rice variety Rice (Oryza sativa) is a staple food crop for more than half of the world’s population.

To identify GSHs in rice, we conducted a mutant screen by analyzing the morphological records and the whole-genome sequencing data of a fast-neutron rice mutant collection in a model japonica rice variety with a short generation time24,25,26. From this screen, we identified five mutants carrying homozygous insertions or translocations (Supplementary Table 1), which do not exhibit visible morphological changes compared with the parental genotype. We verified the homozygous mutations in these mutants by PCR using primers flanking the corresponding mutation sites (Supplementary Fig. 1).

Because the mutations do not incur any visible change in morphology, these five intergenic mutation sites (A, B, C, D, and E) were chosen as the candidate GSHs (Supplementary Table 1). INTECH 05/09/18 Iron Biofortification of Rice: Progress and Prospects. 1. Introduction Rice is one of the most consumed staple foods worldwide. In developing countries, people often rely on rice as their sole source of nutrition [1]. However, polished grain, known as white rice, contains limited amount of essential nutrients to sustain a good health and development [2].

EURACTIV 12/02/20 Fighting malnutrition: Golden Rice and the EU’s GMO conundrum. “This rice could save a million kids a year”, read the July 2000 cover of Time Magazine, referring to a genetically modified rice, “Golden Rice”, that had been biofortified with life-saving nutrition. But in the nearly two decades that have passed since then, the cultivation of genetically biofortified crops, such as Golden Rice, to help solve the global humanitarian crisis of “malnutrition” remains elusive.

One major reason for the delay has been the systematic opposition to all forms of GMOs and genetic engineering by radical interest groups including Greenpeace and many Green party politicians, particularly in Europe. CORNELL ALLIANCE FOR SCIENCE 04/03/20 New study shows CRISPR can be applied to produce biofortified rice. A team of California plant scientists has taken a CRISPR-Cas9 approach to develop more nutritious varieties of rice.

Their research, published today in Nature Communications, demonstrated that CRISPR-Cas9 can be successfully used to biofortify rice with carotenoid, a precursor to the essential nutrient vitamin A. Previous research has demonstrated that biofortification of rice can help prevent blindness, weakened immune systems and other health problems associated with vitamin A deficiency, which is especially prevalent among children in developing nations. The study was led by Prof. 19th World Congress of Soil Science, Soil Solutions for a Changing World - 2010 - Technical aspects of zinc and iron analysis in. FERTILIZER_ORG - 2011 - Yield and Biofortification of Spinach and Rice using Seed‐Core Zinc Technology.

Molecules. 2018 Sep 17;23(9). Expression of Bioactive Lunasin Peptide in Transgenic Rice Grains for the Application in Functional Food. Lunasin, a bioactive peptide initially isolated from soybean, has anticancer, anti-inflammatory, and antioxidant activity. Due its great application value, lunasin seems to be a candidate gene in improving the nutritional value of crops. GOLDENRICE - 2019 - Golden Rice Named Among Project Management Institute’s Most Influential Projects of the Last 50 Years. INTERNATIONAL RICE RESEARCH INSTITUTE 18/12/19 Philippines approves Golden Rice for direct use as food and feed, or for processing.