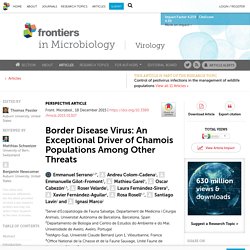 Habitat loss, overexploitation, invasive species, and climate change are the best known drivers of species extinction by far, in part due to the lack of information on the role of pathogens in species extinction (Smith et al., 2009). While the importance of pathogens in species conservation is common knowledge, few people understand the power of diseases to drive extinction, or cause important economic losses. 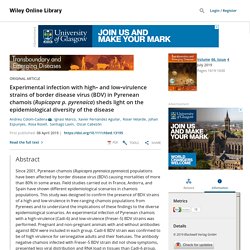 BMC VETERINARY RESEARCH 12/11/18 Seroprevalence of border disease virus and other pestiviruses in sheep in Algeria and associated risk factors. Seroprevalence study After infection with a ruminant pestivirus, the detection of antibodies against the highly conserved pestivirus-NS2–3 (p80) protein by competitive ELISA provides reliable results to confirm seroconversion. 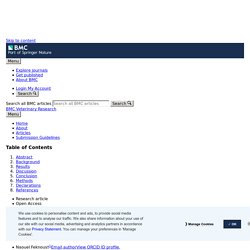 Such assays have been used in different countries to conduct seroprevalence surveys for pestivirus in small ruminants [4, 12, 13]. Our results indicate an estimated flock prevalence of 98.20% and an apparent within-flock prevalence of 60.17%. The true overall prevalence was estimated to be 68.20%. In Tunisia, similar results are reported, with 95% or 52/55 of positive flocks and an animal seroprevalence of 54% ± 4% [14]. Regional differences in the seroprevalence In this survey, we observed marked regional differences in the within-flock seroprevalence of BD in sheep with estimated rates between 18 and 100% depending on the department. REDVET - 2018 - Prevalence of antibodies against Border Disease virus in Junín breed sheep in extensive breeding from SAIS Túpac Amaru, Junín. WAB World Association for Buiatrics VIA YOUTUBE 30/05/18 Comparative effects of Border Disease Virus genotypes on ovine fetal infection. Vet Pathol. 2018 May;55(3): Border Disease Virus Infection of Bovine Placentas. 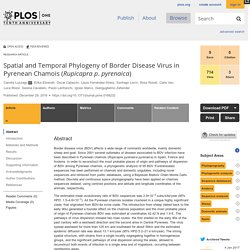 Since 2001 several outbreaks of disease associated to BDV infection have been described in Pyrenean chamois (Rupicapra pyrenaica pyrenaica) in Spain, France and Andorra. In order to reconstruct the most probable places of origin and pathways of dispersion of BDV among Pyrenean chamois, a phylogenetic analysis of 95 BDV 5’untranslated sequences has been performed on chamois and domestic ungulates, including novel sequences and retrieved from public databases, using a Bayesian Markov Chain Monte Carlo method. 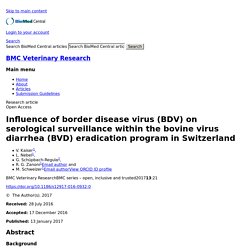 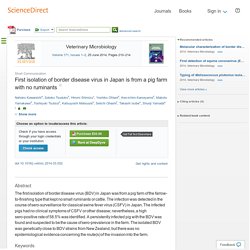 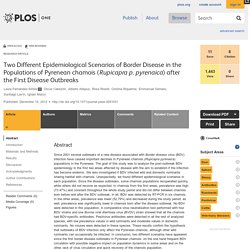 The goal of this study was to analyze the post-outbreak BDV epidemiology in the first two areas affected by disease with the aim to establish if the infection has become endemic. We also investigated if BDV infected wild and domestic ruminants sharing habitat with chamois. Unexpectedly, we found different epidemiological scenarios in each population. Since the disease outbreaks, some chamois populations recuperated quickly, while others did not recover as expected. J Wildl Dis. 2012 Oct;48(4):1021-9. Surveillance of border disease in wild ungulates and an outbreak in Pyrenean chamois (Rupicapra pyrenaica pyrenaica) in Andorra. 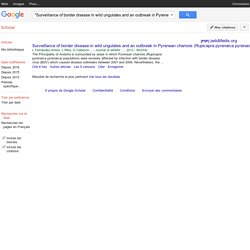 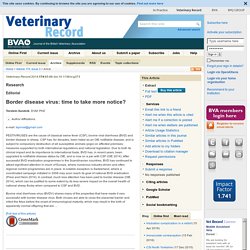 FG INSIGHT 20/12/13 Vet's View: The impact of Border disease on performance. It can be the cause of poor scanning percentages or poorer lambing percentages than normal, more abortions and stillbirths, weakly lambs, ‘hairy shakers’ and increased incidence of lamb diseases, she says. 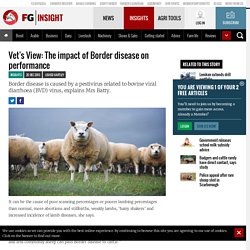 “It is transmitted mainly by nose to nose contact and is most commonly introduced into a flock by a bought-in infected animal. Cattle can spread BVD virus to sheep and less commonly sheep can pass Border disease to cattle.” “A SAC/Moredun study in 2006 found a third of the 125 Scottish flocks tested had evidence of exposure to Border disease,” says Mrs Batty. Adult and healthy lambs exposed to Border disease show only mild signs or no clinical signs at all. Serious consequences occur when sheep are exposed during pregnancy, she explains. Clinical signs “Clinical signs include an increase in the number of barren ewes, abortions, still births and the birth of small weakly lambs.

“These lambs are often referred to as ‘PI’s’, and may appear normal at birth, be weak or have a body tremor.” BMC 21/03/15 Local cross-border disease surveillance and control: experiences from the Mekong Basin. All respondents indicated that they monitor at least 14 of the 17 diseases or conditions agreed upon for MBDS surveillance information sharing (acute flaccid paralysis, avian influenza, Chikungunya fever, cholera, dengue, diphtheria, encephalitis, human immunodeficiency virus [HIV], leptospirosis, malaria, measles, meningitis, pneumonia, severe acute respiratory syndrome [SARS], tetanus, tuberculosis, and typhoid); ten indicated that they monitor all 17 of these.

Overall and not surprisingly, survey respondents from the 15 sites were most familiar with their own country’s surveillance system and their local MBDS XB cooperation (Table 2). They reported being well aware of the WHO IHR in general but they were less aware of specific elements of the IHR. They were more aware of the MBDS central coordinator and his office, which communicates relatively regularly with the XB sites, than with the MBDS country leaders.

Pi-BDV bull calf The Braunvieh × Limousine pi-BDV bull calf originated from a BVDV-free herd of 24 cows, which were co-housed with 20 sheep in the same barn. With the exception of this calf, ear punch biopsy samples [10],[11] of all cattle in the herd were negative for BVDV in an antigen ELISA (IDEXX BVDV Ag/Serum Plus Test, IDEXX Switzerland AG, Bern-Liebefeld, Switzerland) as part of the national BVDV eradication program [12]. Immunohistochemical evaluation revealed that the bull calf was positive for the pestivirus-specific antibody C16 but not for the BVDV-specific antibody Ca3/34-C42.

RT-PCR evaluation (see below) of a blood sample was positive for pestiviral RNA and the calf was considered persistently viraemic. Radiographic findings of the bones of the extremities of the calf were described separately [13], animal no. 3). Heifers Six open heifers of different breeds were acquired at the age of 382 to 748 days (means ± sd = 506 ± 126 days). Acclimation phase Infection phase.