SUSTAINABILITY 26/11/21 Presence and Characterization of Microplastics in Coastal Fish around the Eastern Coast of Thailand. All articles published by MDPI are made immediately available worldwide under an open access license. 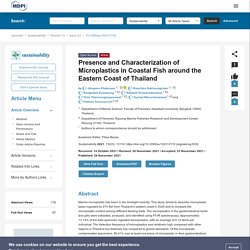 No special permission is required to reuse all or part of the article published by MDPI, including figures and tables. For articles published under an open access Creative Common CC BY license, any part of the article may be reused without permission provided that the original article is clearly cited. Environmental Pollution Volume 292, Part B, 1 January 2022, Microplastics in freshwater: A global review of factors affecting spatial and temporal variations.

Highlights Microplastics are correlated with urban land use, population density, and WWTPs. 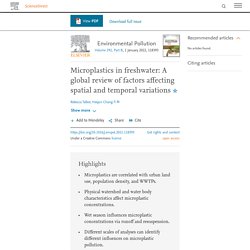 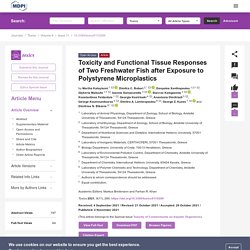 This process may facilitate the hydrophobic waterborne pollutants or chemical additives transfer to biota. In the present study the suitability of a battery of biomarkers on oxidative stress, physiology, tissue function and metabolic profile was investigated for the early detection of adverse effects of 21-day exposure to polystyrene microplastics (PS-MPs, sized 5–12 μm) in the liver and gills of zebrafish Danio rerio and perch, Perca fluviatilis, both of which are freshwater fish species. An optical volume map representation of the zebrafish gill by Raman spectroscopy depicted 5 μm diameter PS-MP dispersed in the gill tissue. 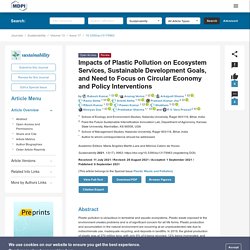 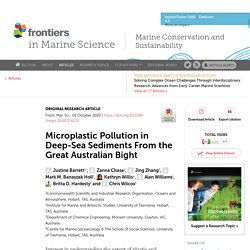 The extent of this pollution, and increasing understanding of its potential impacts, make it a matter of increasing public concern (Bonanno and Orlando-Bonaca, 2018). Millions of tonnes of plastic enter the marine environment annually, and quantities are expected to increase in coming years (Jambeck et al., 2015; Geyer et al., 2017; Lebreton and Andrady, 2019). Over time, plastic items in the marine environment can degrade or break down into smaller pieces predominantly through weathering and mechanical forces such as wave action and abrasion with sand (Thompson et al., 2004; Corcoran et al., 2009).

Traditionally ascribed to the “microplastics” family, their widespread occurrence in the natural environment is commonly reported in plastic pollution studies, based on the assumption that fibers largely derive from wear and tear of synthetic textiles. 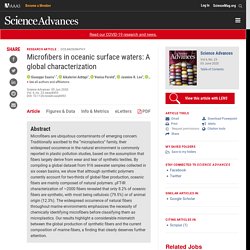 By compiling a global dataset from 916 seawater samples collected in six ocean basins, we show that although synthetic polymers currently account for two-thirds of global fiber production, oceanic fibers are mainly composed of natural polymers. µFT-IR characterization of ~2000 fibers revealed that only 8.2% of oceanic fibers are synthetic, with most being cellulosic (79.5%) or of animal origin (12.3%). The widespread occurrence of natural fibers throughout marine environments emphasizes the necessity of chemically identifying microfibers before classifying them as microplastics. 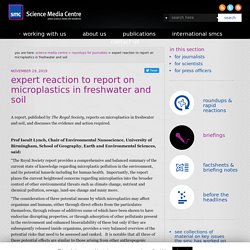 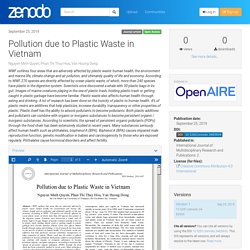 According to WWF, 270 species are directly affected by ocean plastic waste, of which, more than 240 species have plastic in the digestive system. Scientists once discovered a whale with 30 plastic bags in its gut. FRONTIERS IN MARINE SCIENC 26/04/18 Ecotoxicological Effects of Chemical Contaminants Adsorbed to Microplastics in the Clam Scrobicularia plana. Introduction Advances in plastic production have resulted in more versatile, lightweight, durable, and cheap plastics, which have become incorporated in every part of our day-to-day lives (Andrady and Neal, 2009). 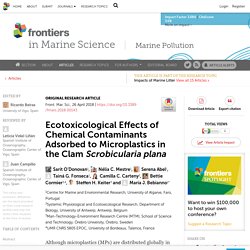 Yet, plastic is now a ubiquitous, long lasting source of litter on the planet (Barnes et al., 2009). PACKAGINGINSIGHTS 22/08/19 Microplastics pose minimal health threat, but more effective studies are needed, stresses WHO. 22 Aug 2019 --- The long-awaited findings of the World Health Organization’s (WHO) assessment of microplastics in the environment have been published, with the organization indicating that the impact on human health appears to be minimal at current levels. 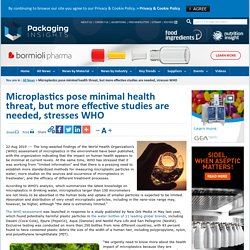 At the same time, WHO has stressed that it was working from “limited information” and that there is a pressing need to establish more standardized methods for measuring microplastic particles in water; more studies on the sources and occurrence of microplastics in freshwater; and the efficacy of different treatment processes. According to WHO’s analysis, which summarizes the latest knowledge on microplastics in drinking water, microplastics larger than 150 micrometers are not likely to be absorbed in the human body and uptake of smaller particles is expected to be limited. The potential hazards associated with microplastics come in three forms: physical particles, chemicals and microbial pathogens as part of biofilms. By Joshua Poole. PARLEMENT EUROPEEN - Réponse à question P-001754-19 Directive on the reduction of the impact of certain plastic products on the environment.

SCIENCEMEDIACENTRE 05/06/19 expert reaction to human consumption of microplastics. June 5, 2019 Research published in Environmental Science & Technology demonstrates that in approximately 15% of Americans’ caloric intake, annual microplastics consumption ranges from 39000 to 52000 particles depending on age and sex. Prof Richard Lampitt, leader of the Microplastic Research Team, National Oceanography Centre, said: “I think that the press release is largely well balanced and reflects the conclusions of the paper. Furthermore, I think the paper is a careful assessment of the data which has to date been published and that the conclusions are sound. “My major criticism of this paper (and many others) is that there is no definition of the term microplastics.

Sci Total Environ. 2018 Jan 15;612:1380-1386. Microplastic and mesoplastic contamination in canned sardines and sprats. Environmental Sciences Europe 18/04/18 Marine litter plastics and microplastics and their toxic chemicals components: the need for urgent preventive measures. Plastics in the ocean: sources, volumes, trends Plastic marine litter is a mixture of macromolecules (polymers)1 and chemicals, its size ranging from several metres to few nanometres. It comprises such diverse items as fishing gear, agricultural plastics, bottles, bags, food packaging, taps, lids, straws, cigarette butts, industrial pellets, and cosmetic microbeads, and the fragmentation debris coming from the weathering of all of them.

It has become ubiquitous in all marine compartments, occurring on beaches; on the seabed; within sediments; in the water column and floating on the sea surface. The quantity observed floating in the open ocean represents only a fraction of the total input: over two-thirds of plastic litter ends up on the seabed with half of the remainder washed up in beaches and the other half floating on or under the surface, so quantifying only floating plastic debris seriously underestimates the amounts of plastics in the oceans [1]. PARLEMENT EUROPEEN - Réponse à question P-005585-18 Reducing the impact of certain plastic products on the environment. PARLEMENT EUROPEEN - Réponse à question E-005222-18 Reducing marine litter from disposable plastic in island regions. SPRINGER 28/12/17 From Coral Triangle to Trash Triangle—How the Hot spot of Global Marine Biodiversity Is Threatened by Plastic Waste. INTECH - 2018 - Challenges and Treatment of Microplastics in Water.

SCIENTIFIC AMERICAN 04/09/18 From Fish to Humans, A Microplastic Invasion May Be Taking a Toll. This is the second of a three-part series that examines our growing understanding of the scope and impacts of microplastics pollution. Mark Browne had a suspicion. He hoped the samples of dried blood taken from a blue mussel and placed under a special microscope would tell him if he was correct. As a fuzzy, three-dimensional image of the mussel’s blood cells appeared, there they were, right in the middle—tiny specks of plastic. Whereas photos of sea turtles eating plastic bags have become the poster child of the environmental harm wrought by humanity’s plastic waste, research like Browne’s illustrates the scope of the problem is far larger than the trash we can see.

Marine Pollution Bulletin Volume 130, May 2018, Microplastic abundances in a mussel bed and ingestion by the ribbed marsh mussel Geukensia demissa. JavaScript is disabled on your browser. Please enable JavaScript to use all the features on this page. Highlights Marsh microplastic densities ranged between 11,000 and 50,000 pieces/m2. PARLEMENT EUROPEEN - Réponse à question P-001619-18 Microplastics in bottles of water. Environmental Pollution Volume 236, May 2018, Single and combined effects of microplastics and mercury on juveniles of the European seabass (Dicentrarchus labrax): Changes in behavioural responses and reduction of swimming velocity and resistance time.

JavaScript is disabled on your browser. Please enable JavaScript to use all the features on this page. Microplastics (MPs) and mercury had negative effects on swimming performance of Dicentrarchus labrax. MPs per see may cause reduction of the swimming velocity and resistance time of fish when swimming against the water flow. Fish behavioural responses can be use as a sensitive endpoints to establish effects from contamination by microplastics These findings have implications to aquatic organisms.

PARLEMENT EUROPEEN - Réponse à question E-003034-17 Plastic and microplastic pollution. MEDCRAVE - 2017 - Occurrence and Impacts of Microplastics in Freshwater Fish. THE GUARDIAN 14/02/17 From sea to plate: how plastic got into our fish. Marine Environmental Research Available online 17 May 2016 Plastics and microplastics in the oceans: From emerging pollutants to emerged threat. FOOD PAKAGING FORUM 07/06/16 Effects of microplastics on fish. EPOCH 02/08/16 How Tiny Pieces of Plastic in Our Oceans Are ‘Terrifying’ MARINE POLLUTION - 2014 - High-levels of microplastic pollution in a large, remote, mountain lake. WATER AIR SOIL POLLUTION - 2014 - The effects of plastic pollution on aquatic wildlife: Current situations and future solutions. MARINE-LITTER-CONFERENCE-BERLIN - Poster : Stranded on our doorstep: plastic waste in the Baltic Sea.