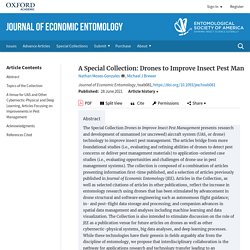 WILDLIFE SOCIETY BULLETIN 25/09/18 Assessing agricultural damage by wild boar using drones. In Flanders (northern Belgium), wild boar (Sus scrofa) returned in 2006 after 50 years of absence and the population is increasing, both in abundance and geographic extent. 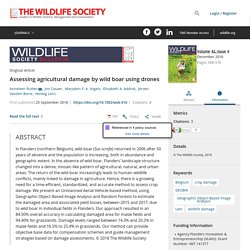 In the absence of wild boar, Flanders’ landscape structure changed into a dense, mosaic‐like pattern of agricultural, natural, and urban areas. The return of the wild boar increasingly leads to human–wildlife conflicts, mainly linked to damage in agriculture. Hence, there is a growing need for a time‐efficient, standardized, and accurate method to assess crop damage. We present an Unmanned Aerial Vehicle‐based method, using Geographic Object‐Based Image Analysis and Random Forests to estimate the damaged area and associated yield losses, between 2015 and 2017, due to wild boar in individual fields in Flanders. 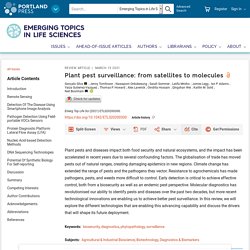 Remote sensing is the use of non-ground-based imaging systems to obtain information about processes and events on Earth, and is unique among the detection and diagnostic methods discussed herein in its ability to offer passive monitoring for the disease at scale, rather than active sampling. SIU_EDU 01/08/18 The future of agriculture: using drones to fight crop diseases. Lindsey McKinzie – Lindsey McKinzie working in a laboratory at Southern Illinois University Carbondale. 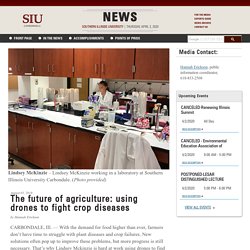 (Photo provided) August 01, 2018 by Hannah Erickson CARBONDALE, Ill. — With the demand for food higher than ever, farmers don’t have time to struggle with plant diseases and crop failures. New solutions often pop up to improve these problems, but more progress is still necessary. New technology helps farmers meet increasing demand As the population grows, so does concern regarding sustainability and food production. Remote Sensing of Environment Volume 231, 15 September 2019, Delineation of agricultural fields in smallholder farms from satellite images using fully convolutional networks and combinatorial grouping. 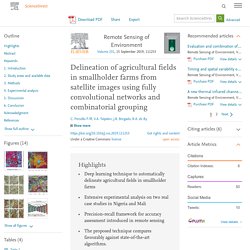 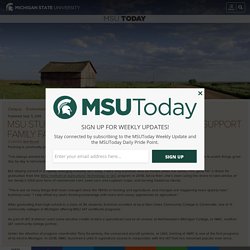 PLOS 28/03/16 Characterizing Forest Change Using Community-Based Monitoring Data and Landsat Time Series. Abstract Increasing awareness of the issue of deforestation and degradation in the tropics has resulted in efforts to monitor forest resources in tropical countries. 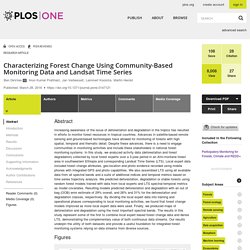 Advances in satellite-based remote sensing and ground-based technologies have allowed for monitoring of forests with high spatial, temporal and thematic detail. Despite these advances, there is a need to engage communities in monitoring activities and include these stakeholders in national forest monitoring systems. EUPHRESCO 26/11/18 The Applications of Remote Sensing in Plant Health (PHeRS) UNION LEADER 24/06/18 UNH scientists experiment with drones to collect forestry data. June 24. 2018 10:45PM. 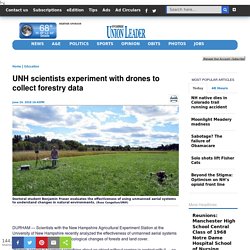 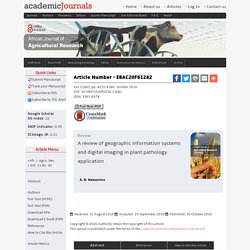 The current global population growth with many mouths to feed is dependent on vibrant agricultural productivity. International Journal of Information Technology Vol. 12 No. 6 2006 Comparison of a Self Organising Map and Simple Evolving Connectionist System for Predicting Insect Pest Establishment. IEEE Workshop on Geoscience and Remote Sensing, IWGRS - NOV 2015 - A Low Cost Mobile Geospatial Solution to Manage Field Survey Data Collection of Plant Pests and Diseases. NeoBiota 18: 119–130 (2013) Improving pest risk assessment and management through the aid of geospatial information technology s. LOUISIANA AGRICULTURE - WINTER 2014 - Investigating the Potential for Drone Use in Agriculture. FARMERS WEEKLY 22/01/14 Drones to have a bigger role in mapping arable crops. THE NEWS 16/12/13 Agriculture is the most promising market for drones. 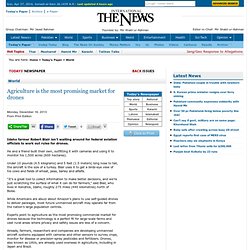 He and a friend built their own, outfitting it with cameras and using it to monitor his 1,500 acres (600 hectares). Under 10 pounds (4.5 kilograms) and 5 feet (1.5 meters) long nose to tail, the aircraft is the size of a turkey. Blair uses it to get a birds-eye view of his cows and fields of wheat, peas, barley and alfalfa.

“It’s a great tool to collect information to make better decisions, and we’re just scratching the surface of what it can do for farmers,” said Blair, who lives in Kendrick, Idaho, roughly 275 miles (440 kilometres) north of Boise. While Americans are abuzz about Amazon’s plans to use self-guided drones to deliver packages, most future unmanned aircraft may operate far from the nation’s large population centres. So far, drones have been used mainly by the military. The Federal Aviation Administration does not allow drones’ commercial use. AP 26/06/13 Oregon drone mission: monitoring potato plant health.

View full size A 6-pound HawkEye remote-controlled aircraft will monitor potato fields during research trials beginning this spring. Tetracam Inc. HERMISTON — A meeting at the Hermiston Chamber of Commerce has focused on a new mission for the unmanned aircraft known as drones: keeping eastern Oregon potatoes happy. The East Oregonian reports that more than 100 guests discussed the emerging technology Tuesday at a panel discussion. The Federal Aviation Administration recently authorized the use of drones to fly over Oregon State University potato fields in search of unhealthy plants. WESTERN FARM PRESS 22/07/13 Drones and pesticide spraying a promising partnership. UC Davis researchers test a remote-controlled helicopter to spray pesticides on vineyards, which are normally sprayed using ground vehicles.

Yamaha, who supplies Japanese rice farmers with flying sprayers, provided the helicopter for these tests. Photos taken at the UC Davis Oakville Station in Oakville, Calif. on May 7, 2013. Photo: Joe Proudman/UC Davis Like so many technological innovations improved upon and perfected by the military, the use of unmanned drones in agricultural production presents an intriguing possibility that has a good chance of catching on in the United States. I read with amazement several recent news articles about the research being conducted by the Yamaha Motor Corp. MODERN FARMER 28/11/13 Using Drones in the Fight Against Apple Scab. For apple growers in the eastern United States, the biggest problem – the most relentless, pervasive, unavoidable issue, which can ruin a whole crop if not managed aggressively – is apple scab. Researchers at the University of New Hampshire are working on a new tool to combat the apple scourge: A drone.

The fungal infection causes dark scabby lesions on the leaves and skin of the apple, which leaves the flavor unaffected, but does effectively make it unsalable. “It’s a huge issue,” says Peter Wagner, owner of Applecrest Farm Orchards, a 110-acre orchard in southeast New Hampshire. SCIENCE DAILY 24/07/13 Seeing Photosynthesis from Space: NASA Scientists Use Satellites to Measure Plant Health. NASA scientists have established a new way to use satellites to measure what's occurring inside plants at a cellular level.

Plants grow and thrive through photosynthesis, a process that converts sunlight into energy. During photosynthesis, plants emit what is called fluorescence -- light invisible to the naked eye but detectable by satellites orbiting hundreds of miles above Earth. NASA scientists have now established a method to turn this satellite data into global maps of the subtle phenomenon in more detail than ever before. Healthy plants use the energy from sunlight to perform photosynthesis, and re-emit some of that light as a faint but measureable glow. In short, abundant fluorescence indicates active photosynthesis and a well functioning plant, while low or no fluorescence can mean that the plant is stressed or shutting down.