FOOD ADDITIVES 11/12/19 Gluten contamination in manufactured gluten-free foods in Turkey. WILEY 10/05/19 Prospective longitudinal study: use of faecal gluten immunogenic peptides to monitor children diagnosed with coeliac disease during transition to a gluten‐free diet. Coeliac disease is an immune‐mediated disorder of the small intestine that affects ~1% of most populations.1, 2 This lifelong condition is initiated by exposure to dietary gluten in genetically susceptible individuals and can affect any organ or tissue. 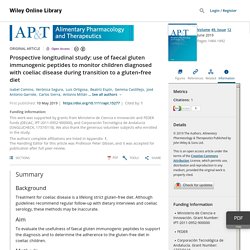 Consequently, a variety of gastrointestinal and extra‐intestinal symptoms are observed, such as abdominal pain, malabsorption, anaemia, failure to thrive, osteoporosis and, occasionally, lymphoma.3 A lifelong gluten‐free diet (GFD) is currently the only available treatment for coeliac disease and has been shown to improve quality of life substantially, both in patients initially presenting with gastrointestinal symptoms and in asymptomatic patients.4 However, adherence to the GFD is not easy because gluten is ubiquitous and often not explicitly listed as an ingredient in food products.

As a result, persistent symptoms and enteropathy are common among coeliac patients who are trying to follow a GFD. 2.1 Study design 2.2 Study population. Journal of Nutrition and Metabolism Volume 2019, A Gluten-Free Diet, Not an Appropriate Choice without a Medical Diagnosis. NATURE 01/05/19 Recent practical researches in the development of gluten-free breads. NATURE 26/07/18 A Systematic Review and Meta-Analysis Evaluating the Efficacy of a Gluten-Free Diet and a Low FODMAPs Diet in Treating Symptoms of Irritable Bowel Syndrome. FDA 16/07/18 Questions and Answers: Gluten-Free Food Labeling Final Rule.

WILEY 29/08/17 An investigation into the nutritional composition and cost of gluten‐free versus regular food products in the UK. Introduction Coeliac disease is an enteropathy caused by an abnormal immune reaction to ingestion of gluten, a protein derived from wheat, rye and barley 1. Life‐long adherence to a gluten‐free (GF) diet, comprising foods naturally GF or containing less than 20 ppm gluten, is the only treatment for individuals with coeliac disease, which has an estimated worldwide prevalence of 1% 2-4. Those with a confirmed diagnosis of coeliac disease in the UK are currently eligible for procurement of GF foods via monthly prescription available from their general practitioner, pharmacist, or dietitian (‘prescribed GF’ foods); however, GF products are also available for purchase from high street and online retailers (‘commercial GF’ foods) 5.

A GF diet is also recommended for individuals with other gluten‐related disorders, including gluten ataxia, dermatitis herpetiformis and noncoeliac gluten sensitivity 6. However, many choose to follow a GF diet for other perceived health benefits 7. Sampling. STATISTA 18/01/17 The Rise Of The Gluten-Free Diet. STATISTA - U.S. Gluten-free Foods Market - Statistics & Facts. NUTRIENTS 04/10/18 Adherence to Gluten-Free Diet in Children with Celiac Disease. SCIENTIFIC AMERICAN 23/11/17 Scientists Genetically Engineer a Form of Gluten-Free Wheat.

A freshly baked roll is as delightful as a soft, fluffy cloud on a summer's day. 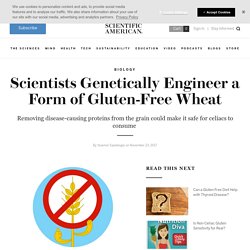 What gives bread much of its appealing texture is gluten, a group of proteins found in wheat, rye and barley. But in people with a serious autoimmune disorder called celiac disease, gluten damages the small intestine. Many others may have milder gluten intolerance and avoid foods that contain it. Most gluten-free bread is made from alternative flours such as rice or potato, so it tastes and feels different from wheat bread. Now, however, researchers say that they have found a way to genetically engineer wheat that contains far less of the most troublesome type of gluten—but still has other proteins that give bread its characteristic taste and springiness. Genetically modified crops are the subject of fierce debate around the world; some countries, including France and Germany, outlaw their cultivation. 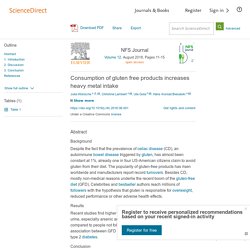 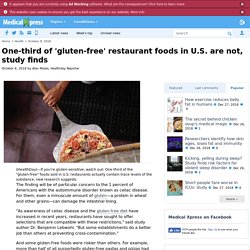 The finding will be of particular concern to the 1 percent of Americans with the autoimmune disorder known as celiac disease. For them, even a minuscule amount of gluten—a protein in wheat and other grains—can damage the intestinal lining. "As awareness of celiac disease and the gluten-free diet have increased in recent years, restaurants have sought to offer selections that are compatible with these restrictions," said study author Dr. Benjamin Lebwohl. "But some establishments do a better job than others at preventing cross-contamination. " Food Research International Volume 110, August 2018, How to improve the gluten-free diet: The state of the art from a food science perspective. Outline HighlightsAbstractGraphical abstractKeywords1. 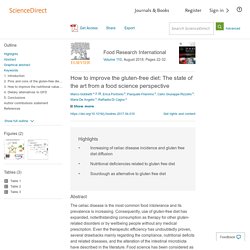 Introduction2. Pros and cons of the gluten-free diet (GFD)3. How to improve the nutritional value of the GFD4. Dietary alternatives to GFD5. WILEY 29/08/17 An investigation into the nutritional composition and cost of gluten‐free versus regular food products in the UK. JOURNAL OF FOOD QUALITY - SEPT 2015 - Gluten-Free Bread Quality: A Review of the Improving Factors. PARLEMENT EUROPEEN - Réponse à question E-003579-17 Gluten-free foods. A recent study(1) suggests that some gluten-free foods may have significantly altered nutritional content in comparison with the foods they are intended to substitute. 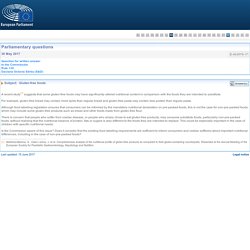 Nutrients 2013, 5(12), 4869-4879; Problems and Challenges to Adaptation of Gluten Free Diet by Indian Patients with Celiac Disease. Nutrients 2013, 5, 4250-4268; The Gluten-Free Diet: Testing Alternative Cereals Tolerated by Celiac Patients. LATVIA UNIVERSITY OF AGRICULTURE - 2012 - Annual 18th international scientific conference proceedings. Au sommaire: Consumers’ attitude towards availability and quality of gluten -free products in the Latvian market. JUST FOOD 30/04/13 Gluten free: the US market. In addition to being one of the world's largest markets for gluten-free foods, the US continues to represent one of its fastest growing. 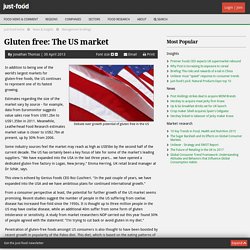 Estimates regarding the size of the market vary by source - for example, data from Euromonitor suggests value sales rose from US$1.2bn to US$1.35bn in 2011. Meanwhile, Leatherhead Food Research estimates market value is closer to US$2.7bn at present, up by 30% from 2006. Some industry sources feel the market may reach as high as US$5bn by the second half of the current decade. The US has certainly been a key focus of late for some of the market's leading suppliers. "We have expanded into the USA in the last three years... we have opened a dedicated gluten free factory in Logan, New Jersey," Emma Herring, UK retail brand manager at Dr Schär, says.

This view is echoed by Genius Foods CEO Roz Cuschieri. From a consumer perspective at least, the potential for further growth of the US market seems promising. The main reasons for this forecast were two-fold. International Journal of Food Sciences and Nutrition, - MARS 2013 - Analysis of ingredient lists of commercially available gluten-free and gluten-containing food products using the text mining technique. 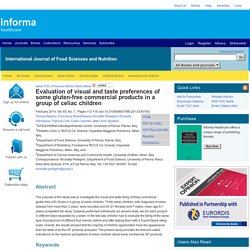 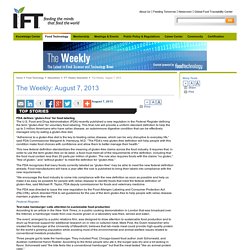 Food and Drug Administration (FDA) recently published a new regulation in the Federal Register defining the term “gluten-free” for voluntary food labeling. This final rule will provide a uniform standard definition to help the up to 3 million Americans who have celiac disease, an autoimmune digestive condition that can be effectively managed only by eating a gluten-free diet. “Adherence to a gluten-free diet is the key to treating celiac disease, which can be very disruptive to everyday life,” said FDA Commissioner Margaret A. Hamburg, M.D. FOOD POLITICS 06/08/13 Good news: FDA issues rules for a gluten-free claim on food packages. In what will surely be good news to people with celiac disease and other problems related to gluten intolerance, the FDA has just issued a final rule for defining foods as “gluten-free.” 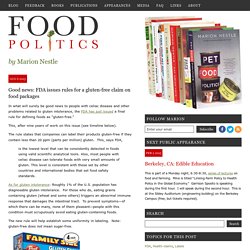 This, after nine years of work on this issue (see timeline below). The rule states that companies can label their products gluten-free if they contain less than 20 ppm (parts per million) gluten. This, says FDA, is the lowest level that can be consistently detected in foods using valid scientific analytical tools. Also, most people with celiac disease can tolerate foods with very small amounts of gluten. As for gluten intolerance: Roughly 1% of the U.S. population has diagnosable gluten intolerance. The new rule will help establish some uniformity in labeling. Policy wonk that I am, I immediately made a timeline. FDA 09/03/13 What is Gluten-Free? FDA Has an Answer. This gluten-free banana bread was made with almond flour instead of regular flour. Plain nuts are also a gluten-free option. Get Consumer Updates by E-mail Consumer Updates RSS Feed Print and Share (PDF 505 K)