FORESTS 30/10/20 Association of Recent Incidence of Foliar Disease in Pine Species in the Southeastern United States with Tree and Climate Variables. Pine forests in the southern United States are a major contributor to the global economy. 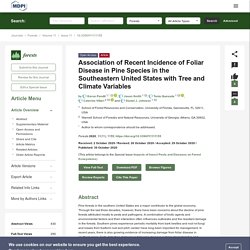 Through the last three decades, however, there have been concerns about the decline of pine forests attributed mostly to pests and pathogens. FORESTS 27/02/20 Responses of Korean Pine to Proactive Managements Under Climate Change. Proactive managements, such as the resistant and the adaptive treatments, have been proposed to cope with the uncertainties of future climates. 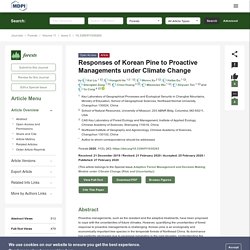 However, quantifying the uncertainties of forest response to proactive managements is challenging. Korean pine is an ecologically and economically important tree species in the temperate forests of Northeast China. Its dominance has evidently decreased due to excessive harvesting in the past decades. Understanding the responses of Korean pine to proactive managements under the future climates is important. In this study, we evaluated the range of responses of Korean pine to proactive managements under Representative Concentration Pathway (RCP) 8.5 scenarios from four General Circulation Models (GCMs). ►▼ Show Figures Figure 1 This is an open access article distributed under the Creative Commons Attribution License which permits unrestricted use, distribution, and reproduction in any medium, provided the original work is properly cited. FORESTS 20/11/20 Seed Sourcing Strategies Considering Climate Change Forecasts: A Practical Test in Scots Pine. 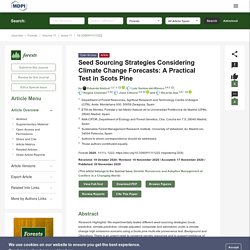 Background and Objectives: There is an urgent need to conserve genetic resources and to support resilience of conifer species facing expected changes and threats. Seed sourcing strategies have been proposed to maximize the future adaptation and resilience of our forests. However, these proposals are yet to be tested, especially in long-lived organisms as forest trees, due to methodological constraints.

In addition, some methods rely on the transfer of material from populations matching the future conditions of the sites. FORESTS 10/01/21 Xylem Phenology and Growth Response of European Beech, Silver Fir and Scots Pine along an Elevational Gradient during the Extreme Drought Year 2018. Highlights: European beech (Fagus sylvatica L.) and silver fir (Abies alba Mill.) displayed parabolic elevational trends of the cessation of xylem cell differentiation phases. 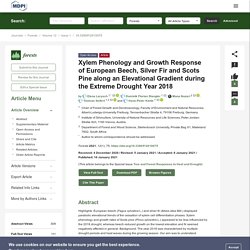 Xylem phenology and growth rates of Scots pine (Pinus sylvestris L.) appeared to be less influenced by the 2018 drought, whereas beech reduced growth on the lowest elevation and fir seemed negatively affected in general. Background: The year 2018 was characterized by multiple drought periods and heat waves during the growing season. Our aim was to understand species-specific responses of xylem phenology and growth to drought and how this effect was modified along an elevational gradient. FORESTS 17/09/20 Prediction of the Suitable Area of the Chinese White Pines (Pinus subsect. Strobus) under Climate Changes and Implications for Their Conservation. White pines (Pinus subsect. 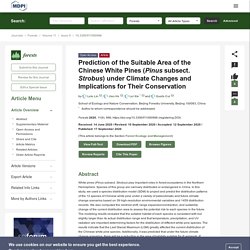 Strobus) play important roles in forest ecosystems in the Northern Hemisphere. Species of this group are narrowly distributed or endangered in China. FORESTS 06/07/20 Biogeographic, Atmospheric, and Climatic Factors Influencing Tree Growth in Mediterranean Aleppo Pine Forests. There is a lack of knowledge on how tree species respond to climatic constraints like water shortages and related atmospheric patterns across broad spatial and temporal scales.

These assessments are needed to project which populations will better tolerate or respond to global warming across the tree species distribution range. 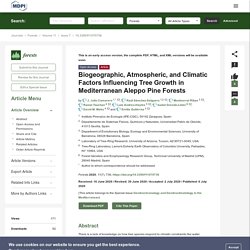 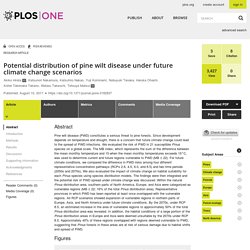 Since development depends on temperature and drought, there is a concern that future climate change could lead to the spread of PWD infections. We evaluated the risk of PWD in 21 susceptible Pinus species on a global scale. The MB index, which represents the sum of the difference between the mean monthly temperature and 15 when the mean monthly temperatures exceeds 15°C, was used to determine current and future regions vulnerable to PWD (MB ≥ 22). For future climate conditions, we compared the difference in PWD risks among four different representative concentration pathways (RCPs 2.6, 4.5, 6.0, and 8.5) and two time periods (2050s and 2070s). FORESTS 22/07/19 Contrasting Response to Drought and Climate of Planted and Natural Pinus pinaster Aiton Forests in Southern Spain. Extreme drought events and increasing aridity are leading to forest decline and tree mortality, particularly in populations near the limits of the species distribution. 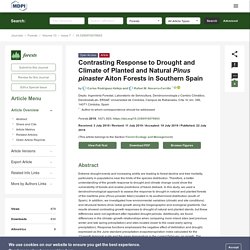 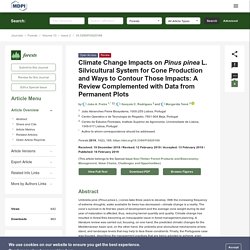 With the increasing frequency of extreme droughts, water available for trees has decreased—climate change is a reality. FORESTS 13/11/19 Shifts in Climate–Growth Relationships of Sky Island Pines. Rising temperatures and changes in precipitation may affect plant responses, and mountainous regions in particular are sensitive to the impacts of climate change. 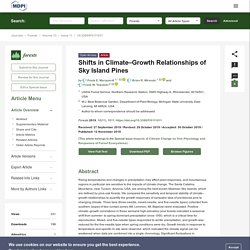 The Santa Catalina Mountains, near Tucson, Arizona, USA, are among the best known Madrean Sky Islands, which are defined by pine-oak forests. We compared the sensitivity and temporal stability of climate–growth relationships to quantify the growth responses of sympatric taxa of ponderosa pine to changing climate. Three taxa (three-needle, mixed-needle, and five-needle types) collected from southern slopes of two contact zones (Mt. Lemmon, Mt. Bigelow) were evaluated. ►▼ Show Figures Figure 1 This is an open access article distributed under the Creative Commons Attribution License which permits unrestricted use, distribution, and reproduction in any medium, provided the original work is properly cited ►▼ Show Figures Figure 1.

FORESTS 05/06/19 The Effects of Climate Change on Pine Wilt Disease in South Korea: Challenges and Prospects. 2.2. Empirical Model and Data Since we introduced the damage function proposed by [5], our empirical damage function of the pine wilt disease can be expressed by the following Equation (5): where D is the pine wilt disease damage rate, z is the host tree health, P is the vector beetle density. AFRICAN JOURNAL OF ECOLOGY 29/05/19 Using the MaxEnt model for assessing the impact of climate change on the Aurasian Aleppo pine distribution in Algeria. Forests 2013 Selection of Provenances to Adapt Tropical Pine Forestry to Climate Change on the Basis of Climate Analogs. The method that provided climate dissimilarity measures that best correlated with growth performance was selected. Selection criteria included the average R2 of the climate dissimilarity growth performance models by species and whether the provenance-specific relationships between climate dissimilarity and growth performance were statistically significant.