TECHNOLOGY NETWORKS 13/07/21 First Breeding of Sugar Cane Using CRISPR/Cas9. Sugarcane is one of the most productive plants on Earth, providing 80 percent of the sugar and 30 percent of the bioethanol produced worldwide. 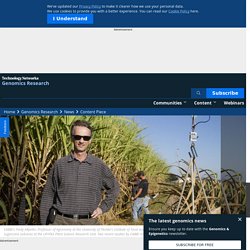 Its size and efficient use of water and light give it tremendous potential for the production of renewable value-added bioproducts and biofuels. But the highly complex sugarcane genome poses challenges for conventional breeding, requiring more than a decade of trials for the development of an improved cultivar. Two recently published innovations by University of Florida researchers at the Department of Energy's Center for Advanced Bioenergy and Bioproducts Innovation (CABBI) demonstrated the first successful precision breeding of sugarcane by using CRISPR/Cas9 genome editing -- a far more targeted and efficient way to develop new varieties.

CRISPR/Cas9 allows scientists to introduce precision changes in almost any gene and, depending on the selected approach, to turn the gene off or replace it with a superior version. SUGARCANE BIOFUELS 29/06/19 Genetically Modified Sugarcane for Biofuels Production: Status and Perspectives of Conventional Transgenic Approaches, RNA Interference, and Genome Editing for Improving Sugarcane for Biofuels. PLANTS 06/02/20 Overexpression of Sucrose Phosphate Synthase Enhanced Sucrose Content and Biomass Production in Transgenic Sugarcane. All articles published by MDPI are made immediately available worldwide under an open access license. 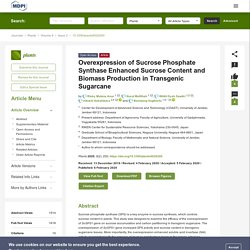 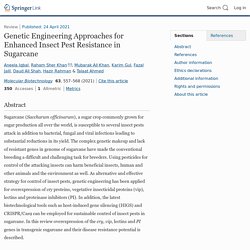 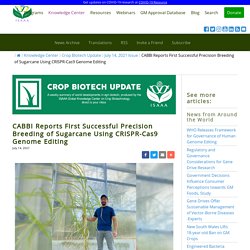 Photo Source: Rajesh Yarra, UF/IFAS Agronomy. University of Florida researchers at the U.S. Department of Energy's Center for Advanced Bioenergy and Bioproducts Innovation (CABBI) reveal the first successful precision breeding of sugarcane by using CRISPR-Cas9 genome editing, published in two reports in Frontiers in Genome Editing. In the first report, researchers demonstrated the ability to turn off variable numbers of copies of the magnesium chelatase gene, a key enzyme for chlorophyll biosynthesis in sugarcane, producing rapidly identifiable plants with light green to yellow leaves. For more details, read the article on the CABBI website. You might also like: The Crop Biotech Update is a weekly newsletter of ISAAA, a non-for-profit organization. 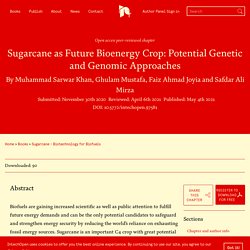 Introduction Increasing energy demands for erratically increasing population, urbanization, industrialization and environmental concerns related to fossil fuels have inclined researchers to explore alternative resources of energy. Compared with the current global energy consumption of 400 exajoule, an increase of 200 exajoule is expected by 2025 [1]. Biofuels have gained much importance due to the depleting fossil fuel resources and the over-accumulation of CO2 and other greenhouse gases in the environment. 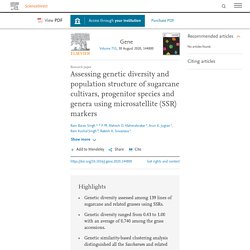 Genetic diversity ranged from 0.43 to 1.00 with an average of 0.740 among the grass accessions. Genetic similarity-based clustering analysis distinguished all the Saccharum and related grasses. Structure analysis indicated that entire population can be grouped into 3 subgroups. Useful for selection of suitable parents, association mapping, and trait specific breeding. Abstract Sugarcane is one among the most important commercial crops used to produce sugar, ethanol, and other byproducts, which significantly contributes in the GDP of India and many other countries around the world. Sugar derived from genetically modified sugarcane. Sugar is an ancient food and currently one of the most used ingredients in human nutrition and in the food industry. 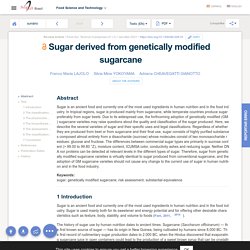 Sugar is used mainly both for its sweetener and energy potential and for offering other desirable characteristics such as texture, body, stability, and volume to foods (Fani, 2011Fani, M. (2011). A evolução do açúcar. Aditivos & Ingredientes, 82, 30-40. Retrieved from , 2014Fani, M. (2014). As múltiplas aplicações do açúcar. The history of sugar use by human nutrition dates to ancient times. Food and Chemical Toxicology Volume 130, August 2019, Risk assessment of genetically modified sugarcane expressing AVP1 gene. Highlights GM AVP1 sugarcane has been developed indigenously which confers drought tolerance. 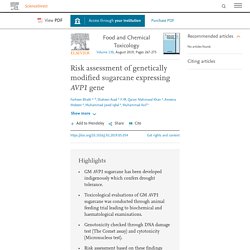 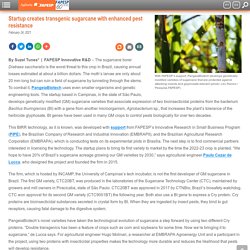 The moth’s larvae are only about 20 mm long but can ruin a field of sugarcane by tunneling through the stems. To combat it, PangeiaBiotech uses even smaller organisms and genetic engineering tools. The startup based in Campinas, in the state of São Paulo, develops genetically modified (GM) sugarcane varieties that associate expression of two bioinsecticidal proteins from the bacterium Bacillus thuringiensis (Bt) with a gene from another microorganism, Agrobacterium sp., that increases the plant’s tolerance of the herbicide glyphosate.

The scientific rationale has to do with complexity. FAPESP - PESQUISA - DEC 2020 - New transgenic sugarcane. The biggest threat to sugarcane cultivation in Brazil—responsible for an estimated R$5 billion in losses each harvest—is a pest insect slightly more than 20 millimeters long, the larval stage of the Diatraea saccharalis moth, widely known as the sugarcane borer. 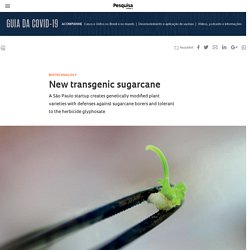 Now São Paulo company PangeiaBiotech is using even smaller organisms together with genetic engineering tools to combat it. The startup develops varieties of transgenic sugarcane that combine the expression of two proteins from the bacterium Bacillus thuringiensis (Bt) that act as bioinsecticides, with one gene extracted from another microorganism, Agrobacterium sp., which delivers greater tolerance to the herbicide glyphosate.

Genes from the Bt bacteria have been used in transgenic processes aimed at biological pest control for over two decades, in a variety of plants. Crop Breeding and Applied Biotechnology - 2020 - Genetic parameters and selection of sugarcane for borer resistance in the advanced selection stage.

SCIENTIFIC REPORTS 09/05/14 Establishment and application of a loop-mediated isothermal amplification (LAMP) system for detection of cry1Ac transgenic sugarcane. Plant materials and genomic DNA Two non-transgenic sugarcane (Saccharum spp.) cultivars, FN95-1702 and ROC22 and seventeen putative cry1Ac transgenic sugarcane clones were used as testing materials. Among them, six clones of 19a-1, 19a-3, 19a-5, 19b-4, 20i-2 and 20i-4, were derived from the variety FN95-1702 and seven clones of 16k-1, 16k-3, 16k-5, 16d-1, 16d-2, 16d-4 and 16d-6, were derived from the variety ROC22. A-2 and A-5 were derived from GT 94-119 and the remaining two, B-2 and B-5, were derived from GT96-44. All the above plant materials are provided by the Key Lab of Sugarcane Biology and Genetic Breeding, Ministry of Agriculture, China. FRONT. PLANT SCI. 08/03/16 Detection of Bar Transgenic Sugarcane with a Rapid and Visual Loop-Mediated Isothermal Amplification Assay. Introduction Sugarcane (Saccharum spp.), a major crop of tropical and sub-tropical regions (Henry and Kole, 2010), is the highest yielding crop worldwide and accounts for ~80% of the sugar (sucrose) production in the world (Nayak et al., 2014) and around 92% of that in China (Luo et al., 2012).

Sugarcane can also be used to produce ethanol as an attractive biofuel feedstock in recent years (Henry and Kole, 2010). Sugarcane belongs to the species of vegetative propagation, and most modern sugarcane varieties are only the sexual generations from wild plants, which suggests that sugarcane is of significant potential for further genetic improvement (Henry and Kole, 2010). However, it usually takes more than 10 years for traditional breeders to identify and release a new elite sugarcane variety (Berding and Roach, 1987; D'Hont et al., 1996) from a huge segregated population (Chen et al., 2011). FAPESP_BR 04/12/19 Most complete commercial sugarcane genome sequence has been assembled.

With FAPESP’s support, researchers have succeeded in mapping 99.1% of the plant’s genes, providing knowledge that will help improve its resistance to disease and increase its biomass yield for fuel or sugar production (photo:Léo Ramos Chaves / Pesquisa FAPESP). December 04, 2019 André Julião | Agência FAPESP – An international group of researchers led by Brazilian scientists has assembled the most complete genome sequence of commercial sugarcane. They mapped 373,869 genes or 99.1% of the total genome. This feat is the result of almost 20 years of research supported by FAPESP and will serve as a basis for the genetic improvement of the world’s largest crop in tonnage according to the UN Food & Agriculture Organization (FAO).

This method was based on double-standard curves of cry1Ac and CYC/APRT/P4H gene, which were integrated into the multi-target recombined plasmid pG1AcAPC0229 (p1AAPC). We discovered that, for transgene copies estimation in sugarcane, the internal reference genes CYC, APRT, and P4H did not differ significantly, obtaining a high amplification efficiency between 0.95 and 1.05 [2]. The CYC gene was selected for transgene copies estimation and the transgene cry1Ac copies in transgenic sugarcane are shown in Table 1.

The proportions of different transgene cry1Ac copies in transgenic sugarcane are shown in Fig. 1. Further analysis of the cry1Ac gene copies showed that 0–1 copies/2C accounted for 18%, while 1–16 (=16) copies/2C, 17–32 copies/2C, and > 33 copies/2C accounted for 23, 41, and 18%, respectively. NATURE 08/10/18 Allele-defined genome of the autopolyploid sugarcane Saccharum spontaneum L. Genome sequencing and assembly The genome size of AP85-441 was estimated at 3.36 Gbp by flow cytometry7. PHYS_ORG 09/10/18 Success is sweet: Researchers unlock the mysteries of the sugarcane genome. For centuries, sugarcane has supplied human societies with alcohol, biofuel, building and weaving materials, and the world's most relied-upon source of sugar.