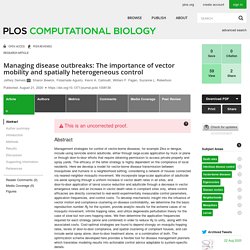 PLoS Comput Biol 16(8): e1008136. Editor: Roger Dimitri Kouyos, University of Zurich, SWITZERLAND Received: September 27, 2019; Accepted: July 9, 2020; Published: August 21, 2020 Copyright: © 2020 Demers et al. This is an open access article distributed under the terms of the Creative Commons Attribution License, which permits unrestricted use, distribution, and reproduction in any medium, provided the original author and source are credited. Data Availability: All relevant data are within the manuscript and its Supporting Information files. PLOS 15/01/20 A scoping review of importation and predictive models related to vector-borne diseases, pathogens, reservoirs, or vectors (1999–2016) Abstract Background As globalization and climate change progress, the expansion and introduction of vector-borne diseases (VBD) from endemic regions to non-endemic regions is expected to occur. 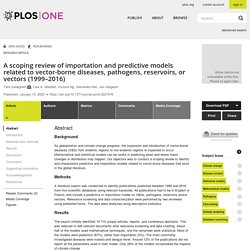 Mathematical and statistical models can be useful in predicting when and where these changes in distribution may happen. Our objective was to conduct a scoping review to identify and characterize predictive and importation models related to vector-borne diseases that exist in the global literature. Methods. J R Soc Interface. 2018 Aug;15(145) Dynamic modelling of personal protection control strategies for vector-borne disease limits the role of diversity amplification. 1. 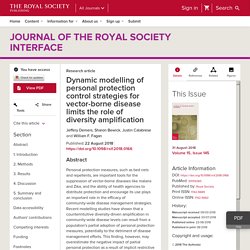 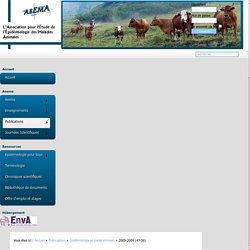 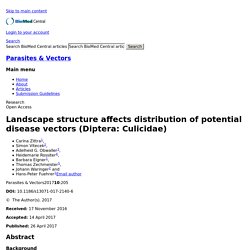 Mosquitoes, while mostly a nuisance of little impact, are also among the most important vectors for various pathogens. Several Culicidae taxa have been demonstrated to (potentially) transmit members of the Flaviviridae (e.g. NATURE / SCIENTIFIC REPORTS 19/04/16 Predicting the epidemic threshold of the susceptible-infected-recovered model. Theoretical predictions of epidemic threshold In the SIR pattern of the spread of disease through a network, at any given time each node is either susceptible, infected, or recovered. 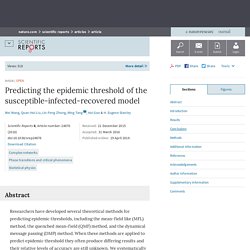 A susceptible node does not transmit the disease. Infected nodes contract the disease and spread it to their neighbors. A recovered node has returned to health and no longer spreads the disease. The synchronous updating method30 is applied to renew the states of nodes. BLOG BIOMED 06/10/15 Predicting Epidemics Dr. Hiroshi Nishiura, Editor-in-Chief of Theoretical Biology and Medical Modelling, discusses what the current biggest epidemics are, where the next big epidemic will come from and how we will cope with it and if. How can we prevent epidemics? 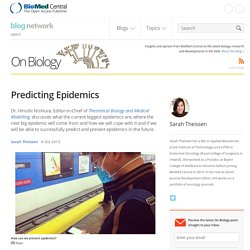 Flickr Professor Hiroshi Nishiura is an Associate Professor at Graduate School of Medicine, The University of Tokyo. After working 10 years for different infectious disease modeling groups at Imperial College London, University of Tuebingen (Germany), University of Utrecht (The Netherlands) and the University of Hong Kong, he returned to Japan in 2013, launching a real-time epidemic modelling unit and starting to building up research capacity and intensify collaborations with governmental entities using mathematical models. His research interests span the areas of statistical epidemiology of infectious diseases, epidemiological modeling and biomathematical formulation of the transmission dynamics of infectious diseases. ARXIV 25/11/13 Bayesian Analysis of Epidemics - Zombies, Influenza, and other Diseases. ADVANCES IN EXPERIMENTAL MEDICINE AND BIOLOGY - 2010 - Modelling parasite transmission and control.

Applied Mathematics, 2013, 4, 13-17 SEIR Model and Simulation for Vector Borne Diseases. PARASITES AND VECTORS 18/12/13 Bayesian geostatistical modelling of soil-transmitted helminth survey data in the People's Republic of China. Ethical considerations The work presented here is based on soil-transmitted helminth survey data derived from the second national survey and additional studies identified through an extensive review of the literature. 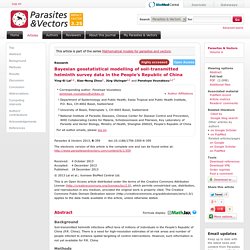 All data in our study was extracted from published sources and they are aggregated over villages, towns or counties; therefore, do not contain information that is identifiable at individual or household level. Hence, there are no specific ethical considerations. Disease data Geo-referenced data on soil-transmitted helminth infections from the second national survey conducted in P.R. Climatic, demographic and environmental data Climatic, demographic and environmental data were downloaded from different readily accessible remote sensing data sources, as shown in Table 1. 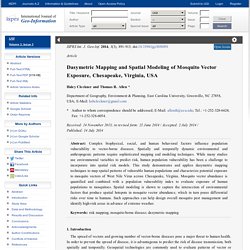 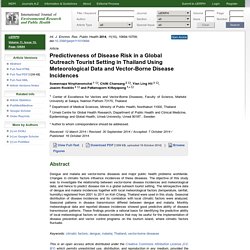 Funding: The study was supported by the Louisiana Board of Regents. Competing interests: The author has declared that no competing interests exist. Mathematical models of disease outbreaks play a crucial role in guiding public health policy [1]–[3] and have provided critical insights into the ecological dynamics of pathogen-regulated populations [4], [5]. What Are Baculoviruses? From a medical and microbiology perspective, baculoviruses have been developed as expression vectors and for research tools in medicine such as vaccine development [8], [9]. INRA ANGERS 20/06/12 Modéliser pour comprendre et prédire la dynamique des populations de vecteurs et des maladies vectorielles. Modélisation et moustiques. Conference of the International Cartographic Association, Paris : France (2011) From Grid Environment to Geographic Vector Agent.