Parasites & Vectors 25/05/17 Modelling the influence of climate on malaria occurrence in Chimoio Municipality, Mozambique. Although malaria shows seasonality according to the climate, very few studies have been conducted on the association between the malaria occurrences with climate variables using weekly resolution and with high malaria occurrence volume in the Southern region of Africa, giving more accurate results. 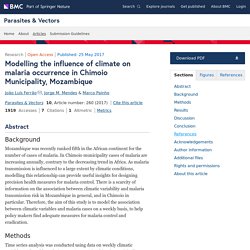 In this study, malaria cases are increasing, contrary to the decreasing tendency reported in neighbouring Malawi [16], and, South Africa [17]. This could be probably due to improved accessibility to health centres and decreased vector control due to the scarcity of resources for malaria control. Trends in Parasitology - MARS 2017 - Mathematical Modelling to Guide Drug Development for Malaria Elimination. IRD - SEPT 2009 - SCIENCES AU SUD - Paludisme : cartographier les risques. MALARIA JOURNAL 23/12/15 Prospects and recommendations for risk mapping to improve strategies for effective malaria vector control interventions in Latin America. Vector control in Latin America is increasingly implemented based on principles and policies of IVM, but operations are yet to be consistently employed throughout the region. 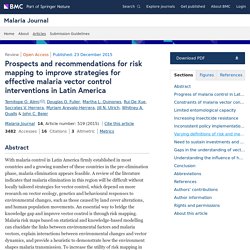 Being evidence-based, the IVM approach advocates that vector control interventions be introduced and implemented based on prior information [8]. However, this does not always happen in practice. In an assessment of malaria control strategies conducted in Ecuador, Peru, Colombia, Bolivia and Guyana, Flores et al. [16] observed that information on research, extent and quality of IRS application was incomplete. Likewise LLINs were administered without prior studies to determine target populations, as well as understand vector behaviour or their response to insecticides in all the countries except Bolivia and Colombia [16, 36]. Whereas coverage and delivery of vector control tools to populations has greatly improved in the past decade, strict compliance with technical guidelines on the tools are still lacking. 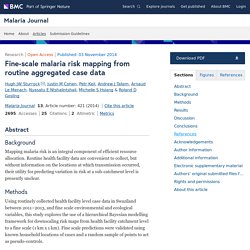 In order to target resources accordingly, an understanding of transmission risk over fine scales is required. Traditionally, such risk mapping is done using cross-sectional infection prevalence surveys, such as malaria indicator surveys. In low transmission settings such surveys do not produce the number of positives required for risk mapping or decision making [4]. While a handful of malaria elimination programmes, such as Swaziland [5] and the Solomon Islands and Vanuatu [31], map the households of malaria cases facilitating fine scale risk mapping, most countries have to rely on health facility level case data. 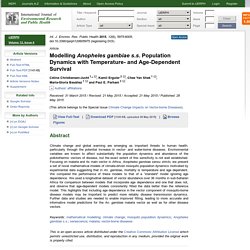 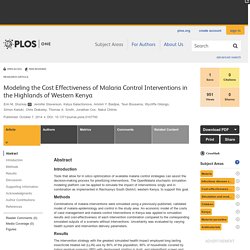 The OpenMalaria stochastic simulation modeling platform can be applied to simulate the impact of interventions singly and in combination as implemented in Rachuonyo South District, western Kenya, to support this goal. Methods Combinations of malaria interventions were simulated using a previously-published, validated model of malaria epidemiology and control in the study area. Results The intervention strategy with the greatest simulated health impact employed long lasting insecticide treated net (LLIN) use by 80% of the population, 90% of households covered by indoor residual spraying (IRS) with deployment starting in April, and intermittent screen and treat (IST) of school children using Artemether lumefantrine (AL) with 80% coverage twice per term. 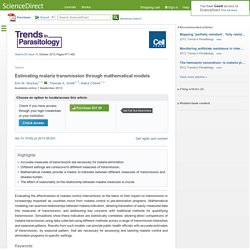 Infectious Diseases of Poverty 2012, 1:11 Malaria transmission modelling: a network perspective. The key concepts, their corresponding representative examples, and publications that we reviewed are summarized in Table 1. 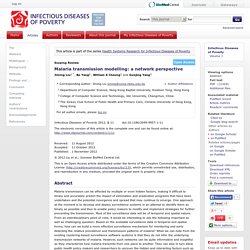 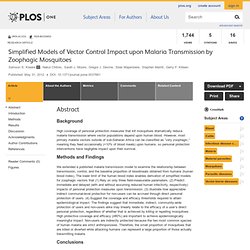 However, most primary malaria vectors outside of sub-Saharan Africa can be classified as “very zoophagic,” meaning they feed occasionally (<10% of blood meals) upon humans, so personal protection interventions have negligible impact upon their survival. Methods and Findings We extended a published malaria transmission model to examine the relationship between transmission, control, and the baseline proportion of bloodmeals obtained from humans (human blood index).