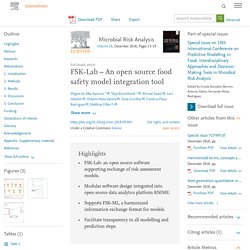 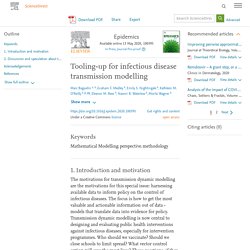 Introduction and motivation The motivations for transmission dynamic modelling are the motivations for this special issue: harnessing available data to inform policy on the control of infectious diseases. The focus is how to get the most valuable and actionable information out of data - models that translate data into evidence for policy. Transmission dynamic modelling is now central to designing and evaluating public health interventions against infectious diseases, especially for intervention programmes. BMC MEDICINE 19/08/19 Guidelines for multi-model comparisons of the impact of infectious disease interventions. The identification and selection of models for inclusion in the model comparison should be transparent and minimise selection bias Once the research question has been determined, a number of models need to be selected for inclusion in the model comparison exercise. 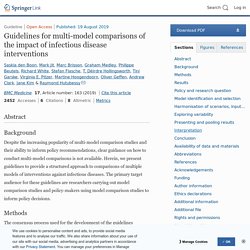 The choice of models depends on the policy question; a definition of the types of mathematical model that may be included should be provided, e.g. individual-based models (agent-based models, microsimulation, etc.), compartmental models, Markov models, etc. Defining the mathematical models to be considered for the study will help with the subsequent development of search terms. The model selection criteria and process should be explicitly defined in advance for transparency. The development of a study protocol for this phase of the model comparison, clearly specifying the search terms, search strategy, and inclusion and exclusion criteria, should be considered as commonly performed for systematic literature reviews. Journal of Theoretical Biology 29/08/19 Mathematically Modeling Spillover Dynamics of Emerging Zoonoses with Intermediate Hosts. FOODS 06/12/19 Predictive Modeling of Microbial Behavior in Food. 1. 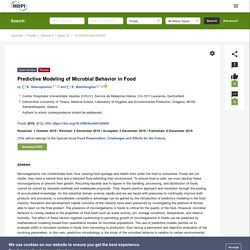 Microorganisms and Food Microbiology is the scientific discipline that comprises the study of microorganisms (e.g., bacteria, fungi, protozoa, and algae) involved in life cycle chains. It encompasses specialties such as cell biology; genetics; taxonomy; epidemiology; biochemistry; pathogenic bacteriology; food, environmental, industrial, and agricultural microbiology; and microbial ecology. Microbiologists have found microbes living in just about everywhere; soil [1] water [2], air [3], animals [4], plants [5], rocks [6], and humans [7]. Microbes have been around for billions of years because they are able to adapt to the ever-changing environments. PLOS 07/11/18 Transmissibility of emerging viral zoonoses. Abstract Effective public health research and preparedness requires an accurate understanding of which virus species possess or are at risk of developing human transmissibility. 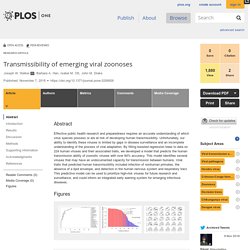 Unfortunately, our ability to identify these viruses is limited by gaps in disease surveillance and an incomplete understanding of the process of viral adaptation. By fitting boosted regression trees to data on 224 human viruses and their associated traits, we developed a model that predicts the human transmission ability of zoonotic viruses with over 84% accuracy. This model identifies several viruses that may have an undocumented capacity for transmission between humans. Modélisation et alimentation (sécurité sanitaire, TIAC)

Fièvre de lassa et modélisation. EUREKALERT 20/11/18 New model predicts which animal viruses may spread among humans. Researchers have developed a model that predicts which of the viruses that can jump from animals to people can also be transmitted from person to person--and are therefore possible sources of human diseases. 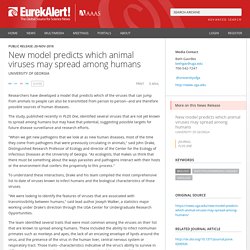 The study, published recently in PLOS One, identified several viruses that are not yet known to spread among humans but may have that potential, suggesting possible targets for future disease surveillance and research efforts. "When we get new pathogens that we look at as new human diseases, most of the time they come from pathogens that were previously circulating in animals," said John Drake, Distinguished Research Professor of Ecology and director of the Center for the Ecology of Infectious Diseases at the University of Georgia. "As ecologists, that makes us think that there must be something about the ways parasites and pathogens interact with their hosts or the environment that confers the propensity to this process. " NIMBioS via YOUTUBE 18/06/14 Postharvest food safety and modeling opportunities. 2016 4th International Conference on Advances in Social Science, Humanities, and Management - Modeling for Food Safety Risk Assessment and Control Based on FTA.

ROYAL SOCIETY - SEPT 2015 - Modelling the species jump: towards assessing the risk of human infection from novel avian influenzas. Abstract The scientific understanding of the driving factors behind zoonotic and pandemic influenzas is hampered by complex interactions between viruses, animal hosts and humans. 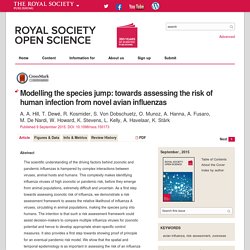 This complexity makes identifying influenza viruses of high zoonotic or pandemic risk, before they emerge from animal populations, extremely difficult and uncertain. As a first step towards assessing zoonotic risk of influenza, we demonstrate a risk assessment framework to assess the relative likelihood of influenza A viruses, circulating in animal populations, making the species jump into humans. The intention is that such a risk assessment framework could assist decision-makers to compare multiple influenza viruses for zoonotic potential and hence to develop appropriate strain-specific control measures. 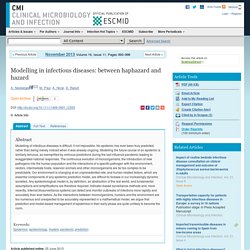 No epidemic has ever been truly predicted, rather than being merely noticed when it was already ongoing. Modelling the future course of an epidemic is similarly tenuous, as exemplified by ominous predictions during the last influenza pandemic leading to exaggerated national responses. The continuous evolution of microorganisms, the introduction of new pathogens into the human population and the interactions of a specific pathogen with the environment, vectors, intermediate hosts, reservoir animals and other microorganisms are far too complex to be predictable. Our environment is changing at an unprecedented rate, and human-related factors, which are essential components of any epidemic prediction model, are difficult to foresee in our increasingly dynamic societies. ADVANCES IN EXPERIMENTAL MEDICINE AND BIOLOGY - 2010 - Modelling parasite transmission and control. CORNELL UNIVERSITY - 2014 - Predictive Modeling of Cholera Outbreaks in Bangladesh. 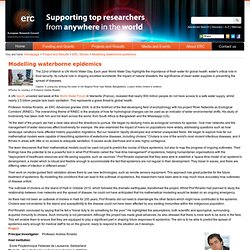 Each year World Water Day highlights the importance of fresh water for global health: water's critical role in food security; its cultural role in shaping societies worldwide; the impact of natural disasters; the significance of clean water supplies in preventing the spread of diseases. Caption: A young boy drinking the water of the Meghna River near Matlab (Bangladesh), a place where cholera is endemic©Photos by courtesy of Professor Andrea Rinaldo A UN report, unveiled last week at the World Water Forum in Marseille (France), revealed that nearly 800 million people do not have access to a safe water supply, whilst nearly 2.5 billion people lack basic sanitation.

This represents a grave threat to global health. Professor Andrea Rinaldo, an ERC Advanced grantee 2008, is at the forefront of the fast-developing field of ecohydrology with his project 'River Networks as Ecological Corridors' (RINEC). 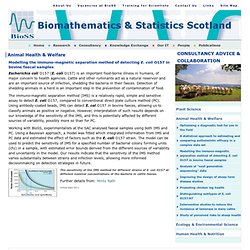 Eurosurveillance, Volume 15, Issue 12, 25 March 2010 Q fever outbreak in Cheltenham, United Kingdom, in 2007 and the use of dispersion modelling to investigate the possibility of airborne spread – guatemalt