Inra-Cirad Open Science Network Meeting - 2009 - An integrative approach of emerging,vector-borne diseases and the global changes: example and perspective. EFSA 12/07/21 A systematic review to understand the value of entomological endpoints for assessing the efficacy of vector control interventions. 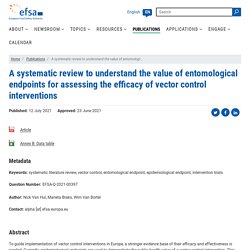 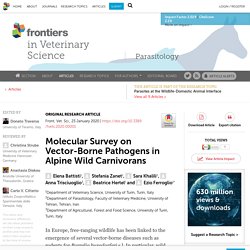 In particular, the increased interactions between humans, domestic animals and wildlife, resulting from human population growth, increase of peri-urban sylvatic animals and habitat fragmentation, have been proposed as a leading cause of pathogen emergence (2). Carnivorans are well-adapted to urban and peri-urban environments, and among the most important sources of zoonotic pathogens such as rabies (3, 4).

In Europe, sylvatic carnivorans as the red fox (Vulpes vulpes) and the European badger (Meles meles) are widely distributed across the continent, with stable or growing populations in urban and suburban areas (5). Furthermore, in recent years we assisted to the recovery of large carnivores in Europe such as the wolf (Canis lupus), which has shown to adapt well to human-dominated landscape (6). ENVA/CIRAD/UNIVERSITE PARIS 11/UNIVERSITE PARIS 12 01/07/10 Rapport de stage : Maladie vectorielles émergentes dans le sud de l’Europe: Cartographie des risques et des compétences. 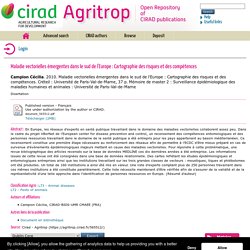 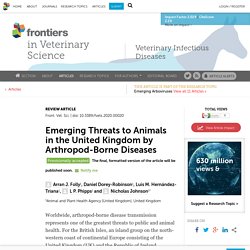 For the British Isles, an island group on the north-western coast of continental Europe consisting of the United Kingdom (UK) and the Republic of Ireland, physical separation offers a barrier to the introduction of many of the pathogens that affect animals on the rest of the continent. Added to this are strict biosecurity rules at ports of entry and the depauperate vector biodiversity found on the islands.

PLOS 13/06/19 Towards harmonisation of entomological surveillance in the Mediterranean area. Abstract Background The Mediterranean Basin is historically a hotspot for trade, transport, and migration. 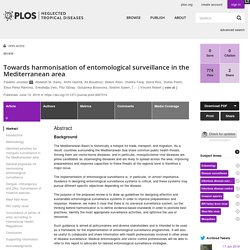 As a result, countries surrounding the Mediterranean Sea share common public health threats. Among them are vector-borne diseases, and in particular, mosquito-borne viral diseases are prime candidates as (re)emerging diseases and are likely to spread across the area. Improving preparedness and response capacities to these threats at the regional level is therefore a major issue. Changement climatique et maladies vectorielles en Europe. PARASITES & VECTORS 11/01/19 Retrospective evaluation of vector-borne infections in dogs imported from the Mediterranean region and southeastern Europe (2007–2015) In 35% of 345 imported dogs tested for vector-borne infections, at least one pathogen was detected. 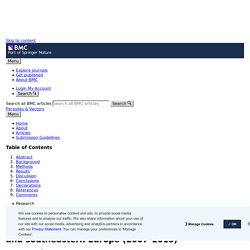 The most common pathogen was L. infantum with 21% of tested dogs being positive, followed by E. canis with 16%. Eleven percent of dogs were positive for H. canis and 10% for Babesia spp. Anaplasma platys was detected in 5% of tested dogs. Eight percent of dogs were positive for multiple pathogens. Only dogs originating from the Mediterranean region had positive test results for more than one pathogen, especially E. canis and Babesia spp. In total, 25 dogs were infected with Babesia spp. in our study. For B. gibsoni, vertical infections [36], as well as infections via bite wounds, saliva and blood contact [37, 38, 39], have to be considered as a transmission route, especially in non-endemic regions for specific vectors [40].

Regarding L. infantum, individual cases of infections transmitted via mating [41, 42], transplacental [43, 44, 45, 46] and bite wounds [47] have been described. EFSA 12/11/18 The importance of vector abundance and seasonality. This joint ECDC‐EFSA report assesses whether vector count data (abundance) and the way these change throughout the year (seasonality) can provide useful information about vector‐borne diseases epidemiological processes of interest, and therefore, whether resources should be devoted to collecting such data. 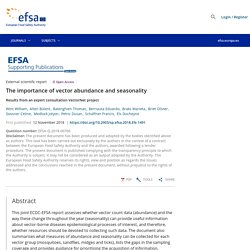 The document also summarises what measures of abundance and seasonality can be collected for each vector group (mosquitoes, sandflies, midges and ticks), lists the gaps in the sampling coverage and provides guidance for prioritising the acquisition of information. Knowing where vector species occur is crucial for the assessment of vector‐borne disease risk. Int. J. Environ. Res. Public Health 2018, Assessment of the Public Health Threats Posed by Vector-Borne Disease in the United Kingdom (UK) IAEA 30/05/18 Detecting Vector Borne Disease: IAEA and FAO Help Enhance Capacity in Europe. Mosquitoes, ticks, flies, lice, aquatic snails have a particular feature in common ­ they can transmit disease to animals and humans. 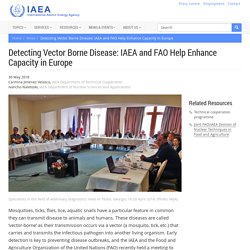 These diseases are called ‘vector-borne’ as their transmission occurs via a vector (a mosquito, tick, etc.) that carries and transmits the infectious pathogen into another living organism. Early detection is key to preventing disease outbreaks, and the IAEA and the Food and Agriculture Organization of the United Nations (FAO) recently held a meeting to enhance European countries’ capacity in this regard. Twenty-one specialists working in the field of veterinary diagnostics have met in Tbilisi, the capital of Georgia, at a meeting organised collaboratively by the IAEA, FAO and Georgia’s National Food Agency of the Ministry of Environmental Protection and Agriculture. According to the World Health Organization (WHO), vector borne diseases account for more than 17% of all infectious diseases, causing more than 700 000 deaths annually. EUROPA_EU - MARS 2018 - Toward climate change impact - Vectors carrying viral infection : what we should know - Study. EFSA CHANNEL via YOUTUBE 11/05/17 Mapping vector-borne diseases.

EFSA - EFSA's vector-borne disease map journals. Parasites & Vectors December 2015, 8:88 A molecular survey of vector-borne pathogens in red foxes (Vulpes vulpes) from Bosnia and Herzegovina. Vector-borne diseases (VBDs) are caused by many protozoan, helminthic, bacterial and viral pathogens, which are transmitted to animals and humans by blood-sucking arthropods, such as ticks, mosquitos, fleas and phlebotomine sand flies [1]. 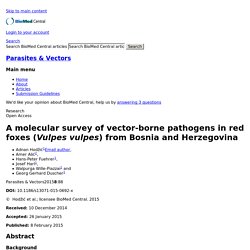 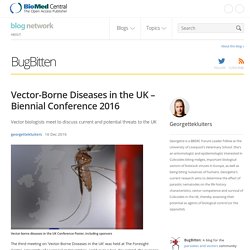 Held over a two-day period, the purpose of this biennial meeting is to bring together members of the major UK research groups who have an interest in vectors or vector-borne diseases which could be a threat to the UK, groups with wider but related areas of interest, members of key UK Government Departments and their Agencies, and representatives of European organisations with an interest in this topic. The conference was kindly funded by the Health Protection Research Unit which was established in April 2014 using funding from the UK Government’s National Institute for Health Research (NIHR), as well as BBSRC, DEFRA, Oxford Biosystems and the Society for General Microbiology, allowing for a reduction in conference fees for PhD student attendees. Eurosurveillance, Volume 14, Issue 12, 26 March 2009 International network for capacity building for the control of emerging viral vector-borne zoonotic diseases: ARBO-ZOONET.

Culicoïdes en Europe. Tiques en Europe. HPSC_IE - MARS 2016 - RANKING OF LIKELIHOOD OF EMERGENCE OF SELECTED VECTORBORNE DISEASES IN IRELAND. PARASITES & VECTORS 24/03/14 Bacterial and protozoal agents of feline vector-borne diseases in domestic and stray cats from southern Portugal. The present study represents the first survey on FVBD agents performed in cats from southern Portugal. The overall prevalence of Leishmania spp. infection in the present study (9.9%) was higher than the one obtained in domestic cats from the north and centre of the country (0.3%) [8], but lower than the prevalence obtained in domestic (20.3%) and stray (30.4%) cats from Lisbon [9,10], suggesting that the rate of Leishmania infection might be dynamic over time, depending on the abundance and distribution of proven vector species in conjunction with the number of infected vertebrate hosts.

The significant differences of Leishmania spp. prevalence between juvenile and adult or old cats corroborated the results obtained in cats from the north of the country [19] and match the situation previously found in a national serosurvey of Leishmania canine infection [20]. OMS 15/04/14 Experts review status of vector-borne diseases in Slovenia. An expert meeting on vector-borne diseases organized on 7 April 2014 in Ljubljana drew national attention to the theme of this year’s World Health Day.

The meeting was attended by over 100 professionals, mostly from the health sector, who listened to lectures by national experts on topics such as the global and national burden of these diseases, blood safety and the protection of travellers. The event was organized by the Ministry of Health of the Republic of Slovenia, the National Institute for Public Health and the WHO Country Office in Slovenia. EFSA 10/06/14 EFSA and ECDC join forces to fight vector-borne diseases. The project will provide data on the presence, distribution and abundance of vectors and vector-borne diseases, which EFSA and ECDC will then use in their risk assessments.

A new video, featuring interviews with Franck Berthe, Head of EFSA’s Animal and Plant Health unit, and Hervé Zeller, Head of the Emerging and Vector-borne Diseases Programme at ECDC, presents the work that the two organisations do together in this field. Vectors are living organisms – such as mosquitoes, ticks, flies or fleas – that transmit a disease from an infected animal to a human or another animal. Many of the diseases that they transmit are considered emerging infectious diseases: diseases that appear for the first time, or that may have existed previously but are rapidly increasing in incidence or geographic range. The scientific advice provided by EFSA and ECDC brings together expertise from human and veterinary medicine. EFSA via YOUTUBE 06/06/14 Combatting vector-borne diseases in Europe. Vector-Borne Diseases in the UK – Biennial Conference 2014 - BugBitten.

Victor Brugman (The Pirbright Institute) and Stacey Leech (Public Health England) This month saw a swarm of parasitologists, entomologists, virologists and ecologists descend on the University of Liverpool for the second conference on ‘Vector-Borne diseases (VBD) in the UK’. Recent years have seen vector-borne diseases in Europe increase in range and disseminate into new environments. New viruses such as Bluetongue and Schmallenberg have emerged,two human cases of the important tick-borne disease Crimean-Congo Haemorrhagic fever virus (CCHFV) were imported into the UK in the last two years and the natural tick vector species Hyalomma marginatum, came into the UK via migratory birds. Due to the recent changes in legislation no longer requiring animals to be tick treated when entering the country via the PETS travel scheme, ever-increasing human and animal movements and climate change effects, the UK may be at heightened risk of vector-borne disease incursion.