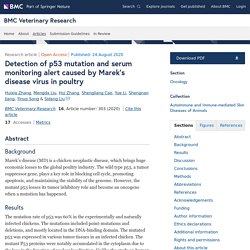 These hens were confirmed to have acquired MDV infection naturally with the absence of other common viral diseases by PCR detection. Their serums were collected for the detection of the P53 antigen and antibody. Their tissue samples, including liver, spleen, pancreas, and bursa of Fabricius, were collected and fixed with 4% formaldehyde for 48 h before histopathological and immunohistochemical studies. Experimental infection of chickens with MDV The number of experimental animal was referred to the number of clinical samples. Histopathology and Immunohistochemistry The fixed liver, spleen, pancreas, and bursa of Fabricius were dehydrated, waxed, and cut into 3 µm slices, followed by Haematoxylin and eosin (H-E) staining for a histopathology examination. Total RNA isolation and reverse transcription Enzyme-linked immunosorbent assay (ELISA) for P53 and P53 antibody Statistical analysis. 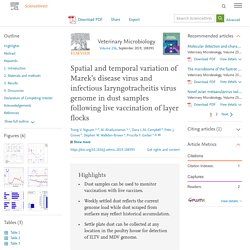 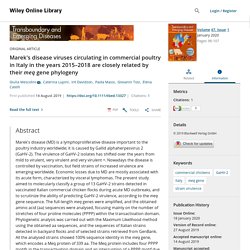 The virulence of GaHV‐2 isolates has shifted over the years from mild to virulent, very virulent and very virulent +. Nowadays the disease is controlled by vaccination, but field strains of increased virulence are emerging worldwide. Economic losses due to MD are mostly associated with its acute form, characterized by visceral lymphomas.

The present study aimed to molecularly classify a group of 13 GaHV‐2 strains detected in vaccinated Italian commercial chicken flocks during acute MD outbreaks, and to scrutinize the ability of predicting GaHV‐2 virulence, according to the meq gene sequence. The full‐length meq genes were amplified, and the obtained amino acid (aa) sequences were analysed, focusing mainly on the number of stretches of four proline molecules (PPPP) within the transactivation domain. Rev.MVZ Cordoba vol.24 no.1 Córdoba Jan/Apr. 2019 Challenges in the diagnosis and control of Marek's disease virus in Colombia. Marek's Disease (MD) is a global neuropathic and lymphoproliferative disease in chickens (Gallus domesticus) caused by a highly contagious oncogenic alphaherpesvirinae [1,2. 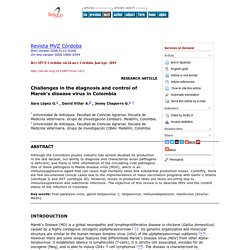 Its genomic organization and molecular structure are similar to the human Herpes Simplex Virus (HSV) of the alphaherpesvirinae subfamily [1,3]. However there are some unique features that differentiate Marek's Disease Virus (MDV) from other Alpha-herpesvirus: it establishes latency in lymphocytes (T-cells), it is strictly cell associated, encodes for an oncogene (Meq), and is able to induce CD4+ T cell lymphomas [3,4]. The disease is characterized by immunosuppression, infiltration of infected lymphocytes into peripheral nerves and visceral organs (liver, kidney, spleen, gonads, heart and proventriculus) and ultimately the formation of metastatic T-cell Lymphomas [5,6]. Affected unvaccinated and susceptible chickens will usually succumb to the disease, resulting in high morbidity and mortality [7]. 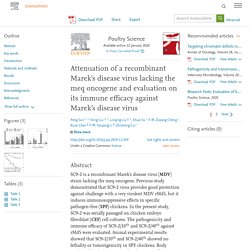 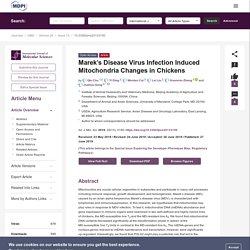 Marek’s disease (MD), caused by an avian alpha-herpesvirus Marek’s disease virus (MDV), is characterized with lymphomas and immunosuppression. In this research, we hypothesize that mitochondria may play roles in response to MDV infection. To test it, mitochondrial DNA (mtDNA) abundance and gene expression in immune organs were examined in two well-defined and highly inbred lines of chickens, the MD-susceptible line 72 and the MD-resistant line 63. We found that mitochondrial DNA contents decreased significantly at the transformation phase in spleen of the MD-susceptible line 72 birds in contrast to the MD-resistant line 63. The mtDNA-genes and the nucleus-genes relevant to mtDNA maintenance and transcription, however, were significantly up-regulated. ►▼ Show Figures Figure 1 ►▼ Show Figures. FRONT. MICROBIOL. 13/12/19 Increased Horizontal Transmission of Recombinant Marek’s Disease Virus Due to Reticuloendotheliosis Virus Long Terminal Repeat Is the Major Competitive Advantage of the Virus Being a Prevalent Strain. 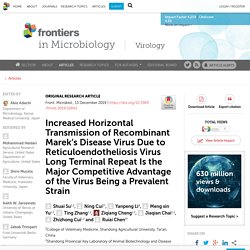 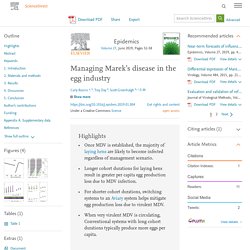 Introduction The industrialization of farming empowers farmers to keep pace with the ever-increasing demands of consumers, but it also creates a situation highly conducive to pathogen evolution as a result of cramped living conditions and shorter rearing periods. A primary example of this is Marek’s disease virus (MDV), which is a disease of poultry that has evolved from a relatively harmless paralytic syndrome into a highly virulent pathogen (Witter, 1997) as a result of industrialization (Atkins et al., 2012; Rozins and Day, 2017). 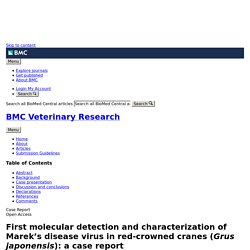 After segregation and palliative treatment, it exhibited astasia and then died. Subcutaneous palpation examination revealed many diffuse soybean-sized nodules (Table 1). Red-crowned crane B showed obvious swelling of its left knee joint. After antibiotic treatment, although it showed an improved appetite and a decrease in symptoms, the crane died unexpectedly ten days later (Table 1). The dead cranes were not immunized with the MDV vaccine. Clinical necropsy revealed diffuse yellow-white nodules from millet to soybean size in the skin, muscle, trachea, liver, gizzard, and heart in both cranes (Fig. 1a-f). Representative tissue samples were collected during necropsy from the liver, spleen, kidney, muscle, heart, feather follicles, and skin, and these were used for pathological and virological investigations (Table 1).

UNIV_KIEV_UA - 2013 - IDENTIFICATION OF МAREK'S DISEASE IN POULTRY FARMS OF UKRAINE AND ESTABLISHMENT THE FORMS OF DISEASE. 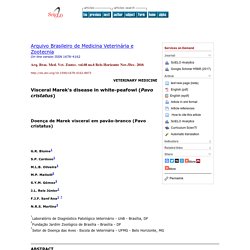 Indian Vet. J., September 2015, 92 (9) : 78 - 80 Co-Occurrence of Marek’s Disease and Inclusion Body Hepatitis in a Broiler Parent Stock. INDIAN VET. J. - MAY 2015 - Marek’s Disease in an Amazon Parrot (Amazona sp.) POULTRY SITE 17/11/15 Marek’s Disease in Small Flocks. Featured Articles Marek’s Disease in Small Flocks 17 November 2015 Christine Heinrichs is a freelance agricultural journalist based the US. She's the author of How to Raise Chickens and How to Raise Poultry, and a regular contributor to a variety of poultry publications. This article from Christine Heinrichs explains the symptoms of Marek's Disease in poultry and how to prevent it occurring in small flocks. AVIAN PATHOLOGY 10/08/15 The epizootiology of Marek's disease 2. The effect of supply flock, rearing, house and production house on the incidence of Marek's disease.

USDA - AOUT 2014 - Developing Tools To Fight Marek’s Disease. New testsand vaccines are making it easier to detect viruses in chickens and protect them from the cancer-like diseases some of them cause. One of the latest tools developed by scientists at the Agricultural Research Service’s Avian Disease and Oncology Laboratory (ADOL) in East Lansing, Michigan, is a modified polymerase chain reaction (PCR) test to detect unique genetic sequences of both Marek’s disease and avian reticuloendotheliosis viruses in various tissues from chickens. Marek’s disease is caused by a highly contagious herpes virus that primarily affects young adult chickens.

It causes severe production losses and usually death and is spread from bird to bird by contaminated dust and dander in chicken houses. Avian reticuloendotheliosis, a retrovirus, infects a broader host range—chickens, turkeys, ducks, geese, and quail. It can also cause tumors, production losses, and death in affected birds. IOSR Journal of Agriculture and Veterinary Science (IOSR-JAVS) - AVRIL 2014 - Detection of Marek’s disease virus meq gene in Feather follicle by Loop-mediated Isothermal Amplification.

Vet Res. 2014; 45(1): 36. Marek’s disease virus and skin interactions. BMC 23/07/15 Outbreak of Marek’s disease in a vaccinated broiler breeding flock during its peak egg-laying period in China. Marek’s disease is one of the most significant infectious diseases in poultry. In birds, it can result in tumours or immunosuppression, making the birds more sensitive to other pathogens. Although MD vaccines have been widely used in China for a long time, failures of MD vaccination occur frequently on some poultry farms. The improper selection of a vaccine could be the cause of vaccine failure [5].

POULTRYSITE 11/11/13 Progress on Control of Marek's Disease Discussed at US Veterinary Convention.