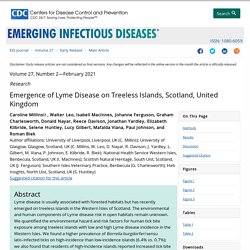 Any changes will be reflected in the online version in the month the article is officially released. Author affiliations: University of Liverpool, Liverpool, UK (C. HOUSE OF LORDS VIA YOUTUBE 05/11/19 Question on Lyme disease and tick-borne encephalitis virus - House of Lords - 5.11.19. EUREKALERT 14/08/19 Study identifies characteristics of Lyme disease hospital patients in England and Wales. Patients with Lyme disease in England and Wales hospitals appear to be predominantly white, female and living in areas of low deprivation, according to a study published in the open access journal BMC Public Health. 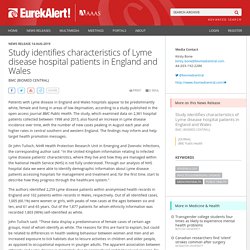 The study, which examined data on 2,361 hospital patients collected between 1998 and 2015, also found an increase in Lyme disease incidence over time, with the number of new cases peaking in August each year and higher rates in central southern and western England. The findings may inform and help target health promotion messages. Dr John Tulloch, NIHR Health Protection Research Unit in Emerging and Zoonotic Infections, the corresponding author said: "In the United Kingdom information relating to infected Lyme disease patients' characteristics, where they live and how they are managed within the National Health Service (NHS) is not fully understood.

BMC PUBLIC HEALTH 15/08/19 Characteristics and patient pathways of Lyme disease patients: a retrospective analysis of hospital episode data in England and Wales (1998–2015) This study provides an in-depth description of Lyme disease patients seen in English and Welsh hospitals, and addresses some of the NICE guidelines calls for new epidemiological data [5]. 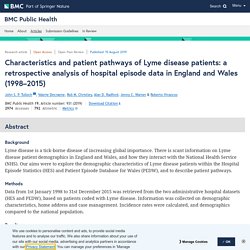 Incidence rose over the study period, showing a similar trend, but at lower levels, compared to officially published figures based on laboratory confirmed cases [2,3,4]. This discrepancy is to be expected, as national laboratories will receive samples from both hospital and primary care patients, and will therefore have a higher incidence. Not all cases would need to be referred to a hospital clinician from primary care, as the majority of cases are likely to present with an uncomplicated erythema migrans rash [5]. PARLIAMENT_UK 03/02/17 Lyme Disease:Written question - 61873. Public Health England (PHE) supports the National Health Service by issuing information leaflets for doctors on the recognition of the signs and symptoms of Lyme disease, holding general practitioner training days and worked to raise awareness, including on the distribution of the disease. 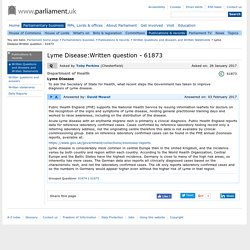 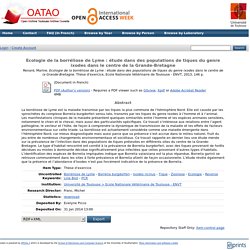 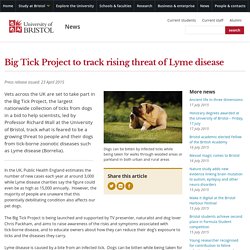 In the UK, Public Health England estimates the number of new cases each year at around 3,000 while Lyme disease charities say the figure could even be as high as 15,000 annually. However, the majority of people are unaware that this potentially debilitating condition also affects our pet dogs. The Big Tick Project is being launched and supported by TV presenter, naturalist and dog lover Chris Packham, and aims to raise awareness of the risks and symptoms associated with tick-borne disease, and to educate owners about how they can reduce their dog’s exposure to ticks and the diseases they carry. Lyme disease is caused by a bite from an infected tick. Medical and Veterinary Entomology 24/09/15 Tick abundances in South London parks and the potential risk for Lyme borreliosis to the general public. Abstract Tick abundances and prevalences of infection with Borrelia burgdorferi sensu lato, the causative agent of Lyme disease, were investigated in four South London parks. 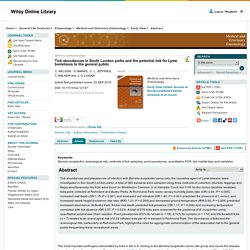 A total of 360 transects were sampled using three methods of collection (blanket, leggings and flags) simultaneously. No ticks were found on Wimbledon Common or at Hampton Court, but 1118 Ixodes ricinus (Ixodida: Ixodidae) ticks were collected at Richmond and Bushy Parks.