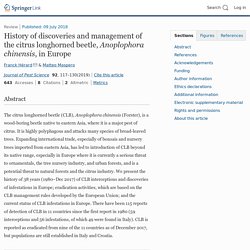 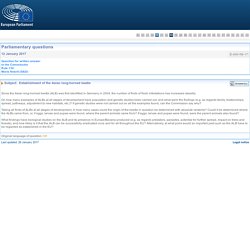 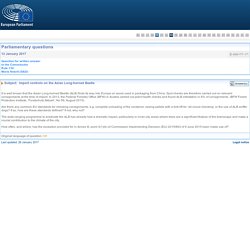 Spot checks are therefore carried out on relevant consignments at the time of import. In 2013, the Federal Forestry Office (BFW) in Austria carried out plant health checks and found ALB infestation in 8% of consignments. (BFW Forest Protection Institute, ‘Forstschutz Aktuell’, No 59, August 2015). Are there any common EU standards for checking consignments, e.g. complete unloading of the container, raising pallets with a fork-lift for ‘all-round checking’ or the use of ALB sniffer dogs? If so, how are these standards defined? The wide-ranging programme to eradicate the ALB has already had a dramatic impact, particularly in inner-city areas where trees are a significant feature of the townscape and make a crucial contribution to the climate of the city. PARLEMENT EUROPEEN - Réponse à question E-000166-17 Reintroduction of the Asian long-horned beetle (ALB) 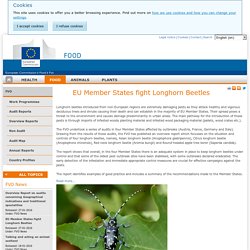 Their spread poses a threat to the environment and causes damage predominantly in urban areas. The main pathway for the introduction of these pests is through imports of infested woody planting material and infested wood packaging material (pallets, wood crates etc.). The FVO undertook a series of audits in four Member States affected by outbreaks (Austria, France, Germany and Italy). Drawing from the results of these audits, the FVO has published an overview report which focusses on the situation and controls of four longhorn beetles, namely, Asian longhorn beetle (Anoplophora glabripennis), Citrus longhorn beetle (Anoplophora chinensis), Red neck longhorn beetle (Aromia bungii) and Round-headed apple tree borer (Saperda candida). Read more... 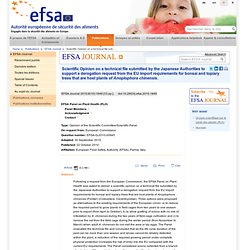 OEPP - EPPO GALLERY - Eradication of Anoplophora glabripennis in Lombardia - IT.