Disclaimer: Early release articles are not considered as final versions. 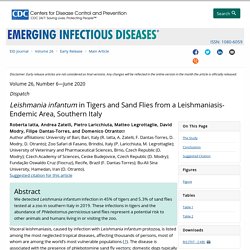 Any changes will be reflected in the online version in the month the article is officially released. Author affiliations: University of Bari, Bari, Italy (R. Iatta, A. Zatelli, F. Dantas-Torres, D. Visceral leishmaniasis, caused by infection with Leishmania infantum protozoa, is listed among the most neglected tropical diseases, affecting thousands of persons, most of whom are among the world’s most vulnerable populations (1). In February 2019, a tiger (index case), born and raised in a zoologic park in southern Italy, had a nonhealing laceration that tested positive for L. infantum DNA on a skin punch biopsy. 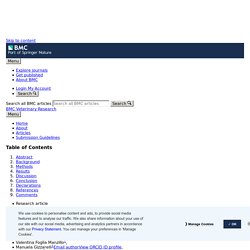 This archipelago is the southernmost territory of Italy (205 km from Sicily) and the nearest to North Africa (113 km). The island has calcareous soil and is characterized by the absence of forest trees, because of intense deforestation at the beginning of the last century. Compared with other places sited at the same latitude, Lampedusa has a mild climate due to consistent winds, that are strong enough to prevent normal development of vegetation. The maximum altitude is 113 m; rivers are not present and water sources are extremely scarce. Study design The study was designed to investigate serological, clinical and parasitological findings from autochthonous dogs living on Lampedusa and to study the phlebotomine distribution on the island, to obtain useful information about the possible risk for human population. 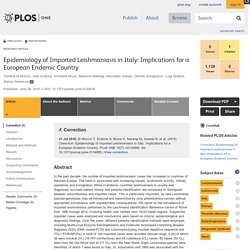 The trend is associated with increasing travels, ecotourism activity, military operations and immigration. While in endemic countries leishmaniasis is usually well diagnosed, accurate patient history and parasite identification are necessary to distinguish between autochthonous and imported cases. This is particularly important, as new Leishmania species/genotypes may be introduced and transmitted by local phlebotomine vectors without appropriate surveillance, with unpredictable consequences. We report on the surveillance of imported leishmaniasis performed by the Leishmania Identification Reference Centre of Rome from 1986 through 2012, involving health care centres from 16/20 Italian regions.

Academic Editor: Sima Rafati, Pasteur Institute of Islamic Republic of Iran Received: February 3, 2015; Accepted: May 9, 2015; Published: June 26, 2015 Introduction. Int. J. Environ. Res. Public Health 2014, A 22-Year Survey of Leishmaniasis Cases in a Tertiary-Care Hospital in an Endemic Setting (Italie) Veterinaria Italiana 2013, 49 (4), 341-346 Canine leishmaniasis surveillance program in a San Marino Republic kennel. The burden of visceral leishmaniasis in Italy from 1982 to 2012: a retrospective analysis of the multi-annual epidemic that occurred from 1989 to 2009. Starting from 1989 Italy experienced an increase of visceral leishmaniasis (VL) cases over a baseline of 10 to 30 cases reported annually. 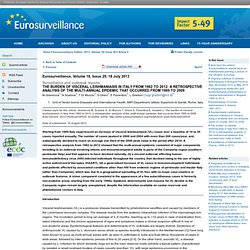 The number of cases peaked in 2000 and 2004 with more than 200 cases/year, and subsequently declined to reach on average one third of the 2000 peak value in the period after 2010. Introduction Visceral leishmaniasis (VL) is a protozoan disease transmitted by phlebotomine sandflies and caused by members of the Leishmania donovani complex. The disease results from the systemic intracellular infection of the macrophage-rich organs. The incubation period is long (an average of 3–8 months, reaching up to >10 years in case of reactivation from latent infections) and the chronic appearance of signs and symptoms makes a clinical suspicion difficult in low or non-endemic areas. 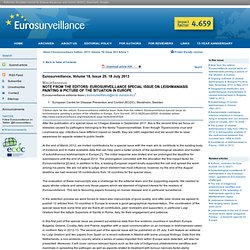 Note from the editors: Eurosurveillance special issue on leishmaniasis painting a picture of the situation in Europe. Euro Surveill. 2013;18(29):pii=20529. Available online: Date of submission: After the publication of a special issue on Chagas disease in September 2011, this is the second time we focus on diseases caused by pathogens belonging to the family Trypanosomatidae. At the end of March 2012, we invited contributions for a special issue with the main aim to contribute to the existing body of evidence and to make available data that can help paint a better picture of the epidemiological situation and burden of autochthonous leishmaniasis in Europe [1]. The evaluation of these manuscripts was a challenge for the editorial team and the supporting experts. ISRN Parasitology Volume 2013 (2013), Serological and Molecular Evaluation of Leishmania infantum Infection in Stray Cats in a Nonendemic Area in Northern Italy.

Veterinaria Italiana 2013, 49 (2), 157-161 Preliminary study of the effects of preventive measures on the prevalence of Canine Leishmaniosis in a recently established focus in northern Italy.