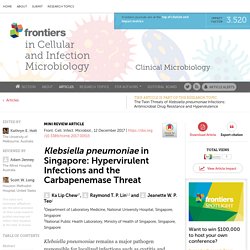 Despite being part of normal flora, they carry a variety of virulence genes and have the capacity to acquire a versatile armament of antibiotic resistance genes. As a result, Kp can cause both localized and disseminated infections in various settings. The clinical manifestations of Kp infections in Singapore are no different from neighboring countries. It has been recognized as a cause of community-acquired and hospital-acquired infections manifesting as bacteraemia, urinary tract, respiratory tract, abscesses, and hepatobiliary infections (Lee et al., 1994, 1996; Tan et al., 1998; Stebbings et al., 1999; Tay et al., 2010; Bahadin et al., 2011). Table 1. ANNALES DE BIOLOGIQUE CLINIQUE - 2012 - Carbapénémases chez Klebsiella pneumoniae: antibiogramme, E-test et test de Hodge. Int J Environ Res Public Health. 2018 Jan; 15(1): 155. Trends in Resistance to Extended-Spectrum Cephalosporins and Carbapenems among Escherichia coli and Klebsiella spp. Isolates in a District in Western India during 2004–2014. 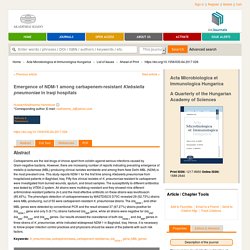 Annals of Clinical Microbiology and Antimicrobials 2017 16:18 Systematic review and meta-analysis of mortality of patients infected with carbapenem-resistant Klebsiella pneumoniae. ESBL-producing K. pneumoniae as an opportunistic pathogen is becoming more challenging to treat because of the emergence of carbapenem resistance, and has a significant influence on patient mortality. 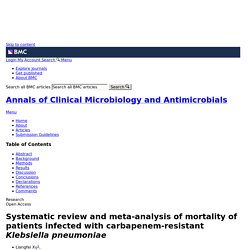 The primary result of this analysis was the pooled crude mortality of 42.14% among patients with CRKP, which is intimately connected with patients’ health and physical status. Although it is accepted that drug resistance is associated with increased mortality because patients tend to receive inappropriate empiric therapy in general [4, 78], other studies have found no such relationship. Bhavnani et al. [79] reported that clinical success was similar between patients with ESBL and those with non-ESBL-producing K. pneumoniae, and ESBL production alone did not appear to be an independent risk factor for treatment failure. Kim et al. [80] also found that ESBL production was not significantly associated with death. There are several limitations to this analysis. THE LANCET 01/11/17 Emergence of carbapenem-resistant hypervirulent Klebsiella pneumoniae. BMC PEDIATRICS 07/01/17 The emergence of carbapenem resistant Klebsiella pneumoniae in Malaysia: correlation between microbiological trends with host characteristics and clinical factors.

Among the seventeen carbapenem resistant K. pneumoniae strains investigated, two of them (K/1310-35 and K/1312-3) showed distinct pulsotypes, sequence types and resistotypes, indicating non-clonal relationship despite being isolated from the same patient. 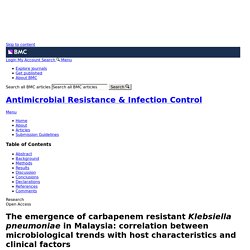 During an outbreak investigation of ESBL producing K. pnemoniae in a neonatal intensive care unit in Germany, Haller and co-workers [23] found two isolates from the same patient taken 138 days apart to be affiliated with separate clusters on phylogenetic tree. This could indicate the presence of diverse pathogen populations within individuals which complicates treatment. THE LANCET 01/11/17 Persistent carbapenem-resistant Klebsiella pneumoniae: a Trojan horse. 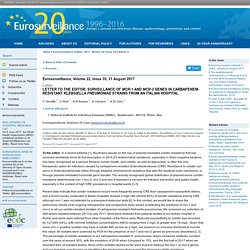 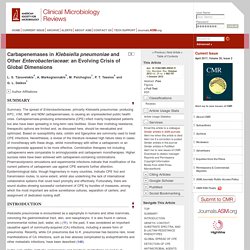 In the absence of controlled comparative trials, however, an overall critical appraisal of antibiotic treatment schemes inevitably has to be based on a variety of case reports, case series, retrospective studies, and observational studies. Moreover, these studies are focused on K. pneumoniae, as clinical experience with other CPE is quite limited. Therefore, the assessment we attempt here lacks many of the characteristics of a rigorous meta-analysis but may provide some guidance on the treatment of CPE-infected patients. Table 3 Table 4 Fig 2 Table 5. BMC Infectious Diseases 03/11/16 A prospective study of treatment of carbapenem-resistant Enterobacteriaceae infections and risk factors associated with outcome.

The present study described a prospective cohort of hospitalized adult patients with infection caused by CRE. 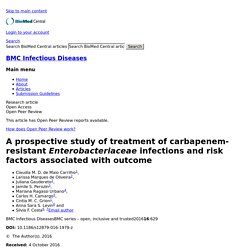 The blaKPC gene was the only one identified in the strains studied. Monotherapy was used for UTI, and combination therapy for other sites of infection. There was no difference in the Kaplan Meier survival curve comparing therapy with two, three, or more drugs to treat systemic infections. Age, dialysis, and presence of shock were independent risk factors for infection-related death. The high mortality of 34 % observed in this study was similar to previous reports that showed mortality caused by K. pneumoniae bacteremia harboring KPC ranging from 39 to 82 % [2, 3, 9, 25]. In this study, bivariate analysis identified age, comorbidities, pneumonia, dialysis, and presence of shock as significant risk factors for mortality as well as the APACHE II and SOFA scores at ICU discharge. 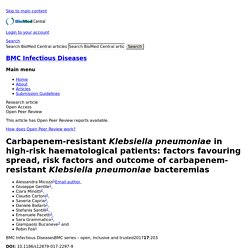 After the intervention, the rate of new CRKP-positive among hospitalized patients decreased from 11 to 2%, from 2.3 to 0.8 new CRKP-positive patient per month. The detection of the 45% of CRKP-positive patients during the 3-month period of bed shortage, when the urgency of hospitalization might have reduced the accuracy of isolation procedures - particularly for not screened newly admitted patients - corroborates this result. The high colonization pressure favors CRKP diffusion [19, 20, 21]. The workload due to the concomitant hospitalization of a high number of CRKP carriers kept under contact precaution may increase the risk of isolation precaution transgressions [20, 21]. Institut Scientifique de Santé Publique (BE) - 2008 -Signalement des premiers cas de Klebsiella pneumoniae multi-résistant, productrice de carbapénémase plasmidique de type VIM-1 dans les hôpitaux aigus en Belgique. EUROSURVEILLANCE 30/10/14 Control of carbapenemase-producing Klebsiella pneumoniae: a region-wide intervention.

Starting in 2010, there was a sharp increase in infections caused by Klebsiella pneumoniae resistant to carbapenems in the Emilia-Romagna region in Italy. 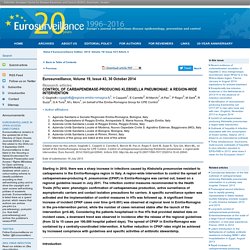 A region-wide intervention to control the spread of carbapenemase-producing K. pneumoniae (CPKP) in Emilia-Romagna was carried out, based on a regional guideline issued in July 2011. The infection control measures recommended to the Health Trusts (HTs) were: phenotypic confirmation of carbapenemase production, active surveillance of asymptomatic carriers and contact isolation precautions for carriers. A specific surveillance system was activated and the implementation of control measures in HTs was followed up. A significant linear increase of incident CPKP cases over time (p<0.001) was observed at regional level in Emilia-Romagna in the pre-intervention period, while the number of cases remained stable after the launch of the intervention (p=0.48). Methods The following infection control measures were recommended:

In this single-center observational analysis, we described the changes observed over time (3 years) in the frequency of CPKP detection in clinical samples and on SRS. 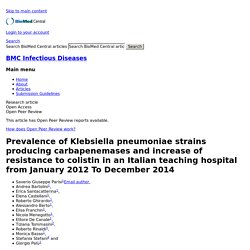 Furthermore, we analyzed the trend in CPKP colistin susceptibility and the evolution of colistin-sensitive to colistin-resistant strains over time. Two strengths of this work are the updated reports (December 2014) and the study design. The screening program included 15,104 patients in three different clinical settings at the same hospital (ICD, SD and MD), and comparable infection control strategies were applied in each setting. In 2014, we observed a statistically significant increase in the percentage of patients in whom CPKP was detected by SRS (2.3 %), compared with 2012 (1.5 %) and 2013 (1.3 %). The increased surveillance schedule in the MD was matched by a significant increase in positivity from 2012 to 2014.

In 2014, the CoR detection rate (including both SRS and CS) was 22 % among all CPKP cases. Open Forum Infect Dis. 2016 Oct; 3(4): ofw222. Carbapenem-Resistant Klebsiella pneumoniae Infection in Three New York City Hospitals Trended Downwards From 2006 to 2014. ECDC 25/11/16 Occurrence of carbapenemase-producing Klebsiella pneumoniae and Escherichia coli in Europe. ​The global rise of carbapenemase-producing Enterobacteriaceae (CPE) is alarming and is an increasing threat to patient safety, in Europe and globally. It results in higher healthcare costs, prolonged hospital stays, treatment failures and sometimes death. In 2012, the European Centre for Disease Prevention and Control (ECDC) launched the the “European Survey on Carbapenamase-Producing Enterobacteriaceae''' (EuSCAPE) project with the aim to gather data on the occurrence of CPE in Europe and build laboratory capacity for their diagnosis and for surveillance. The surve​y showed that on average in Europe, 1.3 patients per 10 000 hospital admissions had a carbapenemase-producing K. pneumoniae or E. coli infection, with the highest incidence found in southern and southeastern Europe.

In K. pneumoniae, the most frequently detected carbapenamases were KPC enzymes, followed by OXA-48-like, NDM and VIM, while in E. coli, there were OXA-48-like enzymes followed by NDM and KPC.