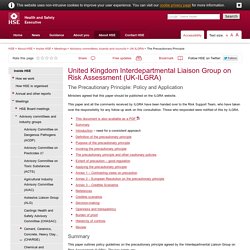 This paper and all the comments received by ILGRA have been handed over to the Risk Support Team, who have taken over the responsibility for any follow up work on this consultation. Those who responded were notified of this by ILGRA. Summary This paper outlines policy guidelines on the precautionary principle agreed by the Interdepartmental Liaison Group on Risk Assessment (ILGRA). The purpose of the precautionary principle is to create an impetus to take a decision notwithstanding scientific uncertainty about the nature and extent of the risk. Introduction – need for a consistent approach 1. 2. 3. 4.Although it is widely accepted that the precautionary principle should be invoked in deciding how hazardous activities should be addressed, there is considerable debate about what the principle means, and about how it should be applied in practice. 5. 6. 9.

Key Point. PARLEMENT EUROPEEN - Réponse à question P-000887-16 European precautionary principle and TTIP. The precautionary principle is enshrined in European primary law and applied by the Court of Justice in all areas where there are no definitive scientific findings concerning potential risks, affecting consumer protection, food safety or the authorisation of chemicals. 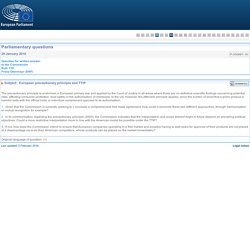 In the US, however, the aftercare principle applies, since the burden of proof that a given product is harmful rests with the official body or individual complainant opposed to its authorisation. 1. Given that the Commission is currently seeking to v conclude a comprehensive free trade agreement; how could it reconcile these two different approaches, through harmonisation or mutual recognition for example?

2. PARLEMENT EUROPEEN - Réponse à question E-010545-15 Reasoned precautionary principle in agriculture. Although GMOs, or genetically modified organisms, have proven to be extremely useful in certain sectors, it is also true that a great deal of conscientiousness must be shown when applying them to agriculture — meaning that the issue of their use is something of a grey area. 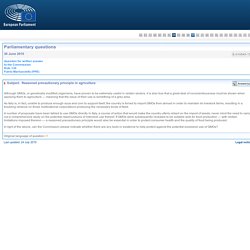 As Italy is, in fact, unable to produce enough soya and corn to support itself, the country is forced to import GMOs from abroad in order to maintain its livestock farms, resulting in a troubling reliance on those multinational corporations producing the necessary kinds of feed. A number of proposals have been tabled to use GMOs directly in Italy, a course of action that would make the country utterly reliant on the import of seeds, never mind the need to carry out a comprehensive study on the potential repercussions of intensive use thereof. 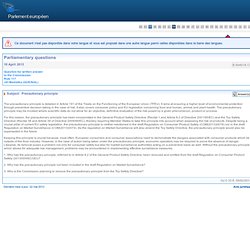 It aims at ensuring a higher level of environmental protection through preventive decision-taking in the case of risk. It also covers consumer policy and EU legislation concerning food and human, animal and plant health. The precautionary principle may be invoked where scientific data do not allow for an objective, definitive evaluation of the risk posed by a given phenomenon, product or process. For this reason, the precautionary principle has been incorporated in the General Product Safety Directive (Recital 1 and Article 8.2 of Directive 2001/95/EC) and the Toy Safety Directive (Recital 38 and Article 39 of Directive 2009/48/EC), thereby requiring Member States to take this principle into account when assessing the risk of products. 1. 2. 3.

EEA - The precautionary principle and false alarms — lessons learned. Part A commences with an analysis of 'false positives' showing that these are few and far between as compared to false negatives and that carefully designed precautionary actions can stimulate innovation, even if the risk turns out not to be real or as serious as initially feared. 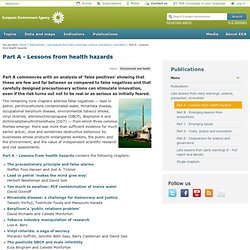 PARLIAMENT_UK 14/02/14 GM foods and application of the precautionary principle in Europe. The Department for Environment, Food and Rural Affairs (DEFRA) believes that GM is one of several technologies necessary to foster a “vibrant sector” in UK agriculture. 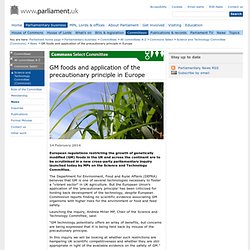 But the European Union’s application of the ‘precautionary principle’ has been criticized for holding back development of the technology, despite European Commission reports finding no scientific evidence associating GM organisms with higher risks for the environment or food and feed safety. Launching the inquiry, Andrew Miller MP, Chair of the Science and Technology Committee, said: “GM technology potentially offers an array of benefits, but concerns are being expressed that it is being held back by misuse of the precautionary principle. In this inquiry we will be looking at whether such restrictions are hampering UK scientific competitiveness and whether they are still appropriate in light of the available evidence on the safety of GM.”

Terms of reference Submitting written evidence Each submission should: Please note that: