Analytical and Bioanalytical Chemistry - 2008 - Electroanalytical biosensors and their potential for food pathogen and toxin detection. JOURNAL OF SENSORS 19/12/18 Monitoring and Control Systems in Agriculture Using Intelligent Sensor Techniques: A Review of the Aeroponic System. In recent years, intelligent sensor techniques have achieved significant attention in agriculture. 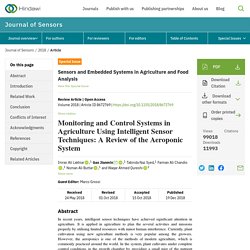 It is applied in agriculture to plan the several activities and missions properly by utilising limited resources with minor human interference. Currently, plant cultivation using new agriculture methods is very popular among the growers. However, the aeroponics is one of the methods of modern agriculture, which is commonly practiced around the world. In the system, plant cultivates under complete control conditions in the growth chamber by providing a small mist of the nutrient solution in replacement of the soil.

The nutrient mist is ejected through atomization nozzles on a periodical basis. 1. Agriculture has an ancient history nearly dates back to thousands of years. Baudoin et al. [10] reported that the artificial plant growing method (e.g., greenhouse and factory farms) is one of the fundamental types of precision agriculture. Biosensors and Bioelectronics 22 (2007) 1205–1217 Review : Pathogen detection: A perspective of traditional methods and biosensors. Enzyme and Microbial Technology 32 (2003) 3–13 Advances in biosensors for detection of pathogens in food and water. 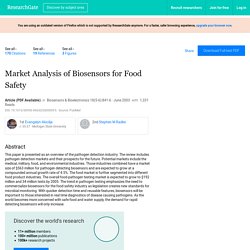 Strong efforts in research and development have already produced workable biosensors for a variety of applications in the medical field. However, only a few biosensors for the detection of pathogenic bacteria are commercially available or are approaching commercia- lization. 2.1. The largest market for pathogen testing is the medical industry. Applicable to a pathogen detecting biosensor. Flora found in the human gastrointestinal tract are. 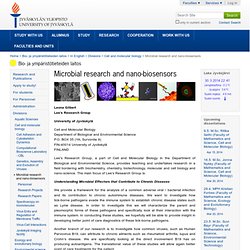 BOX 35 (YA; Survontie 9) FIN-40014 University of Jyväskylä FINLAND Lee's Research Group, a part of Cell and Molecular Biology in the Department of Biological and Environmental Science, provides teaching and undertakes research in a field bordering with biochemistry, chemistry, biotechnology, molecular and cell biology and nano-science. The main focus of Lee’s Research Group is: Understanding Microbial Effectors that Contribute to Chronic Diseases We provide a framework for the analysis of a common adverse viral / bacterial infection and its contribution to chronic autoimmune diseases. Another branch of our research is to investigate how common viruses, such as Human Parvovirus B19, can attribute to chronic ailments such as rheumatoid arthritis, lupus and Crohn’s disease. Presentations: Chiang Mai University. RGJ-PhD Congress XIV. Biosensor. A biosensor is an analytical device, used for the detection of an analyte, that combines a biological component with a physicochemical detector.[1][2] the sensitive biological element (e.g. tissue, microorganisms, organelles, cell receptors, enzymes, antibodies, nucleic acids, etc.), a biologically derived material or biomimetic component that interacts (binds or recognizes) the analyte under study. 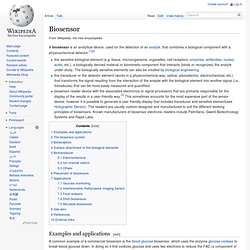 Examples and applications[edit] A common example of a commercial biosensor is the blood glucose biosensor, which uses the enzyme glucose oxidase to break blood glucose down. In doing so it first oxidizes glucose and uses two electrons to reduce the FAD (a component of the enzyme) to FADH2. This in turn is oxidized by the electrode in a number of steps. A canary in a cage, as used by miners to warn of gas, could be considered a biosensor. Light of a fixed wavelength is reflected off the gold side of the chip at the angle of total internal reflection, and detected inside the instrument. Cells. Use of bioluminescent bacterial biosensors to investigate the role of free-living helminths as reservoirs and vectors of Salmonella - UWE Research Repository. 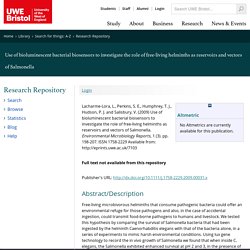