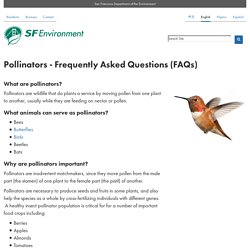 Pollinators are wildlife that do plants a service by moving pollen from one plant to another, usually while they are feeding on nectar or pollen. What animals can serve as pollinators? Bees Butterflies Birds Beetles Bats Why are pollinators important? Pollinators are inadvertent matchmakers, since they move pollen from the male part (the stamen) of one plant to the female part (the pistil) of another. Pollinators are necessary to produce seeds and fruits in some plants, and also help the species as a whole by cross-fertilizing individuals with different genes. Berries Apples Almonds Tomatoes What attracts pollinators to a plant?

Color, nectar, pollen and scent attract pollinators to a plant. I’ve heard that many bees are dying because of Colony Collapse Disorder. Colony Collapse Disorder is a rather mysterious phenomenon that occurs when the majority of worker bees in a colony disappear, leaving behind a queen, a few nurse bees, and plenty of food. Related Content. Indiana_clearchoicescleanwater_org - Frequently Asked Questions - Pollinators. EN_WIKIPEDIA - Pollination management. Placing honey bees for pumpkin pollination Mohawk Valley, NY Date pollinator up an 'Abid Rahim' palm tree Pollination management is the label for horticultural practices that accomplish or enhance pollination of a crop, to improve yield or quality, by understanding of the particular crop's pollination needs, and by knowledgeable management of pollenizers, pollinators, and pollination conditions. 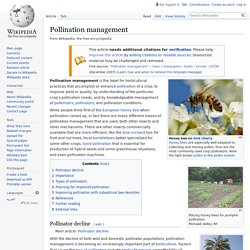 While people think first of the European honey bee when pollination comes up, in fact there are many different means of pollination management that are used, both other insects and other mechanisms. There are other insects commercially available that are more efficient, like the blue orchard bee for fruit and nut trees, local bumblebees better specialized for some other crops, hand pollination that is essential for production of hybrid seeds and some greenhouse situations, and even pollination machines. Pollinator decline[edit] Importance[edit] Types of pollinators[edit] References[edit] EN_WIKIPEDIA - Buzz pollination. A bee using buzz pollination Buzz pollination or sonication is a technique used by some bees, such as solitary bees (Andrena carantonica) to release pollen which is more or less firmly held by the anthers.[1] The anthers of buzz-pollinated plant species are typically tubular, with an opening at only one end, and the pollen inside is smooth-grained and firmly attached. 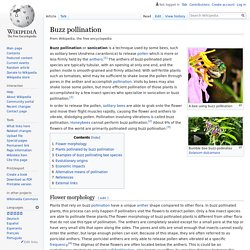 With self-fertile plants such as tomatoes, wind may be sufficient to shake loose the pollen through pores in the anther and accomplish pollination. Visits by bees may also shake loose some pollen, but more efficient pollination of those plants is accomplished by a few insect species who specialize in sonication or buzz pollination.[2] In order to release the pollen, solitary bees are able to grab onto the flower and move their flight muscles rapidly, causing the flower and anthers to vibrate, dislodging pollen. 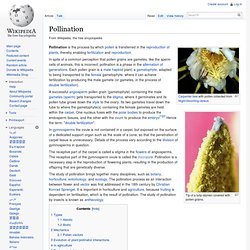 Pollination is the process by which pollen is transferred in the reproduction of plants, thereby enabling fertilization and reproduction. In spite of a common perception that pollen grains are gametes, like the sperm cells of animals, this is incorrect; pollination is a phase in the alternation of generations. Each pollen grain is a male haploid plant, a gametophyte, adapted to being transported to the female gametophyte, where it can achieve fertilization by producing the male gamete (or gametes, in the process of double fertilization).

A successful angiosperm pollen grain (gametophyte) containing the male gametes (sperm) gets transported to the stigma, where it germinates and its pollen tube grows down the style to the ovary. Its two gametes travel down the tube to where the gametophyte(s) containing the female gametes are held within the carpel. The receptive part of the carpel is called a stigma in the flowers of angiosperms. AGRIC_WA_GOV_AU - Honeybee pollination : technical data for potential honeybee-pollinated crops and orchards in Western Australi. US FOREST SERVICE - Plant Pollination Strategies. ANNALS OF BOTANY - 2009 - Wind of change: new insights on the ecology and evolution of pollination and mating in wind-pollinated.