WIKIPEDIA - page sugarcane. Cut sugarcane Sugarcane, or sugar cane, is any of several species of tall perennial true grasses of the genus Saccharum, tribe Andropogoneae, native to the warm temperate to tropical regions of South Asia, and used for sugar production. 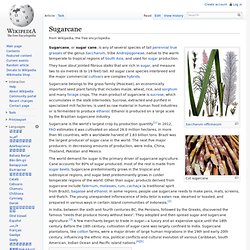 Sugarcane belongs to the grass family (Poaceae), an economically important seed plant family that includes maize, wheat, rice, and sorghum and many forage crops. The main product of sugarcane is sucrose, which accumulates in the stalk internodes. Sucrose, extracted and purified in specialized mill factories, is used as raw material in human food industries or is fermented to produce ethanol. Ethanol is produced on a large scale by the Brazilian sugarcane industry. Sugarcane is the world's largest crop by production quantity.[1] In 2012, FAO estimates it was cultivated on about 26.0 million hectares, in more than 90 countries, with a worldwide harvest of 1.83 billion tons. 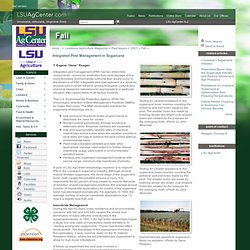 Eugene “Gene” Reagan Integrated pest management (IPM) has two distinctive components—economic protection from pest damage and a more favorable environmental outcome than would occur in the absence of IPM. Integrated pest management is a dynamic process and involves balance among biological, cultural and chemical measures deemed most appropriate to a particular situation after careful study of all factors involved. The U.S. Environmental Protection Agency (EPA) has encouraged selection of Best Management Practices (BMPs) for major field crops. A goal of LSU AgCenter entomology research is to improve IPM in the Louisiana sugarcane industry. Insecticide ManagementDuring the last 30 years, borer resistance and environmental concerns with fish and bird kills caused the review and termination of many effective insecticides in the sugarcaneindustry. 10th International Epidemiology Workshop, New York : États-Unis (2009) Analysis of spatio-temporal spread of Sugarcane yellow le. 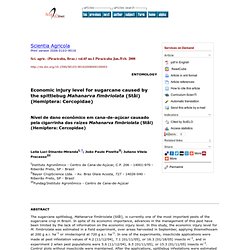 DACNET_NIC_IN - Major Insect Pest Management Of Sugarcane Crop. Matching with long diversity of conditions under which sugarcane is grown in the world, there is wide spectrum of pests and diseases which have come to acquire a place of priority for control on regional or inter-regional basis due to the agro-climatic management conditions associated with the area. 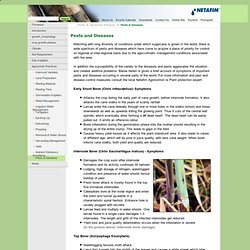 In addition the susceptibility of the variety to the diseases and pests aggravates the situation and creates additive problems. Below herein is given a brief account of symptoms of important pests and diseases occurring in several parts of the world. For more information and pest and disease control measures consult the local Netafim Agronomist or Plant protection expert. Early Shoot Borer (Chilo infescatellus)- Symptoms Attacks the crop during the early part of cane growth, before internode formation. Internode Borer (Chilo Saccharifagus Indicus) - Symptoms Top Borer (Scirpophaga Excerptalis) DACNET_NIC_IN - Major Insect Pest Management Of Sugarcane Crop. Major Insect Pest Management Of Sugarcane Crop Sugarcane is a long duration crop of 10-18 months and therefore is liable to be attacked by a number of insect pests and diseases. 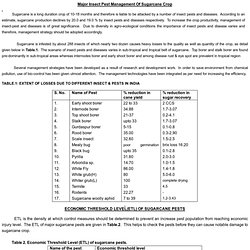 According to an estimate, sugarcane production declines by 20.0 and 19.0 % by insect pests and diseases respectively. To increase the crop productivity, management of insect-pest and diseases is of great significance. Due to diversity in agro-ecological conditions the importance of insect pests and disease varies and therefore, management strategy should be adopted accordingly. Sugarcane is infested by about 288 insects of which nearly two dozen causes heavy losses to the quality as well as quantity of the crop, as detail given below in Table.1. Several management strategies have been developed as a result of research and development work. ETL is the density at which control measures should be determined to prevent an increase pest population from reaching economic injury level. The Better Sugar-cane Initiative. University of Florida - Sugarcane Handbook.

INDIAN JOURNAL OF MEDICAL MICROBIOLOGY 2007. How safe is sugarcane juice? 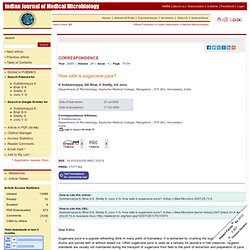