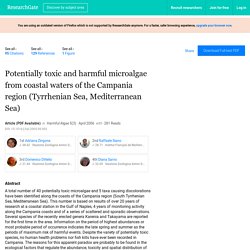 This number is based on results of over 20 years of research at a coastal station in the Gulf of Naples, 4 years of monitoring activity along the Campania coasts and of a series of scattered and sporadic observations. Several species of the recently erected genera Karenia and Takayama are reported for the first time in the area.

Information on the period of highest abundances or most probable period of occurrence indicates the late spring and summer as the periods of maximum risk of harmful events. CICIMAR Oceanides 01/2012; A checklist and classification of living Dinoflagellates (Dinoflagellata, Alveolata) HARMFUL ALGAE - 2008 - harmful algal blooms and eutrophication: Examining linkages from selected coastal regions of the United States. RIKILT WAGENINGEN - Présentation : Marine Biotoxins in Shellfish. 2004 - Marine Biotoxins. The views expressed in this publication are those of the author(s) and do not necessarily reflect the views of the Food and Agriculture Organization of the United Nations. 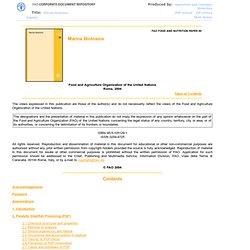 All rights reserved. Reproduction and dissemination of material in this document for educational or other non-commercial purposes are authorised without any prior written permission from copyright holders provided the source is fully acknowledged. Reproduction of material in this document for resale or other commercial purposes is prohibited without the written permission of FAO. Application for such permission should be addressed to the Chief, Publishing and Multimedia Service, Information Division, FAO, Viale delle Terme di Caracalla, 00100 Rome, Italy, or by e-mail to copyright@fao.org Contents Acknowledgements Foreword Abbreviations 1. 2. 3. 4. 5. 6. 7. 8. 9. 9.1 Conclusions 9.2 Recommendations References FAO Technical Papers Back Cover. Disease Listing, Marine Toxins, General Information. Marine Toxins Frequently Asked Questions What are marine toxins? 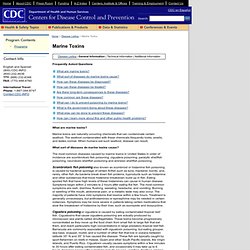 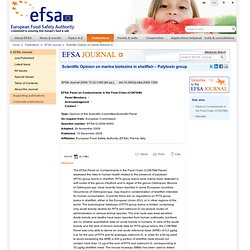 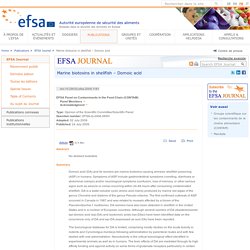 Symptoms of ASP include gastrointestinal symptoms (vomiting, diarrhoea or abdominal cramps) and/or neurological symptoms (confusion, loss of memory, or other serious signs such as seizure or coma) occurring within 24-48 hours after consuming contaminated shellfish. DA is a water-soluble cyclic amino acid mainly produced by marine red algae of the genus Chondria and diatoms of the genus Pseudo-nitschia. CABI - 2003 - Food Safety: Contaminants and Toxins. MAR. DRUGS - 2008 - Neurotoxic shellfish poisoning.