Tetrahedron 64 (2008) 2924e2929 New routes to clavine-type ergot alkaloids. Part 2: Synthesis of the last, so far not yet synthesized member of the clavine alkaloid family, (#)-cycloclavine* – guatemalt 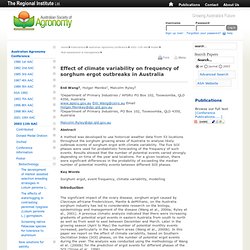 The five SOI phases were used for probabilistic forecasting of the frequency of such events. Results showed that the number of potential events varied strongly depending on time of the year and locations. Key Words Sorghum ergot, event frequency, climate variability, modelling The significant impact of the ovary disease, sorghum ergot caused by Claviceps africana Frederickson, Mantle & deMilliano, on the Australia sorghum industry has led to considerable research on the biology, epidemiology and management of the disease (Wang et al., 2000a; Ryley et al., 2001).

Where Tx and Tm are daily maximum and minimum temperature (°C) respectively. A. B. A. B. C. D. E. WIKIPEDIA - Poisonings mistaken for ergotism. Ergot or ergot fungi refers to a group of fungi of the genus Claviceps.[1] The most prominent member of this group is Claviceps purpurea ("rye ergot fungus"). 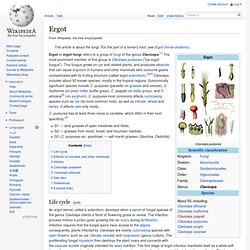 This fungus grows on rye and related plants, and produces alkaloids that can cause ergotism in humans and other mammals who consume grains contaminated with its fruiting structure (called ergot sclerotium).[2][3] Claviceps includes about 50 known species, mostly in the tropical regions. Economically significant species include C. purpurea (parasitic on grasses and cereals), C. fusiformis (on pearl millet, buffel grass), C. paspali (on dallis grass), and C. africana[4] (on sorghum). C. purpurea most commonly affects outcrossing species such as rye (its most common host), as well as triticale, wheat and barley. It affects oats only rarely. 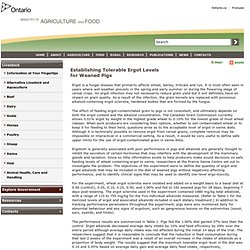 It is most often seen in years where wet weather prevails in the spring and early summer or during the flowering stage of cereal crops. An ergot infection may not necessarily reduce grain yield but it will definitely have an impact on grain quality. As a result of the infection, the grain kernels are replaced with poisonous alkaloid-containing ergot sclerotia, hardened bodies that are formed by the fungus. The effect of feeding ergot-contaminated grain to pigs is not consistent, and ultimately depends on both the ergot content and the alkaloid concentration. The Canadian Grain Commission currently allows 0.01% ergot by weight in the highest grade wheat to 0.10% for the lowest grade of most wheat classes. The performance results are summarized in Table 1. The researchers also measured prolactin concentrations from blood samples taken from the pigs. Australian Journal of Agricultural Research, 54 (2). pp. 167-175 2004. Alkaloids of the sorghum ergot pathogen (Claviceps africa.