Aquaculture Volume 291, Issues 1–2, 3 June 2009 Susceptibility of Atlantic salmon and rainbow trout to the salmon lice Lepeophtheirus salmonis. JavaScript is disabled on your browser. 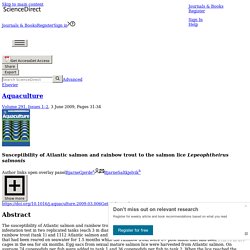 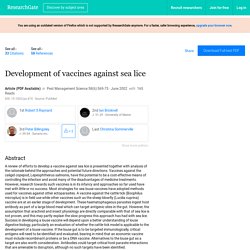 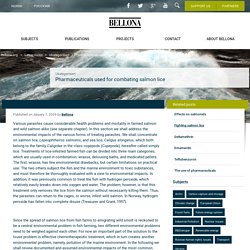 In this section we shall address the environmental impacts of the various forms of treating parasites. We shall concentrate on salmon lice, Lepeophtheirus salmonis, and sea lice, Caligus elongatus, which both belong to the family Caligidae in the class copepods (Copepoda), hereafter called simply lice. Treatments of lice-infested farmed fish can be divided into three main categories, which are usually used in combination: wrasse, delousing baths, and medicated pellets. The first, wrasse, has few environmental drawbacks, but certain limitations on practical use. The two others subject the fish and the marine environment to toxic substances, and must therefore be thoroughly evaluated with a view to environmental impacts. WIKIPEDIA - Salmon louse. The salmon louse, Lepeophtheirus salmonis, is a species of copepod in the genus Lepeophtheirus. 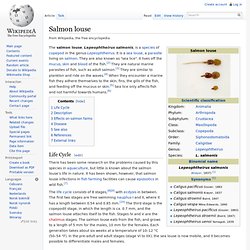 It is a sea louse, a parasite living on salmon. They are also known as "sea lice". It lives off the mucus, skin and blood of the fish.[2] They are natural marine parasites of fish, such as adult salmon.[3] They are similar to plankton and ride on the waves.[4] When they encounter a marine fish they adhere themselves to the skin, fins, the gills of the fish, and feeding off the mucous or skin.[5] Sea lice only affects fish and not harmful towards humans.[6] Life Cycle[edit] There has been some research on the problems caused by this species in aquaculture, but little is known about the salmon louse's life in nature. Description[edit] Effects on salmon farms[edit] This parasite is one of the major threats to salmon farmers. Disease[edit] In small numbers, Sea Lice cause little damage to a fish although if populations increase on a fish, this can lead to death. 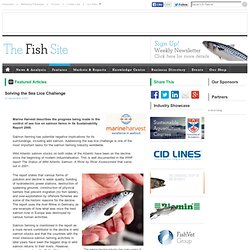 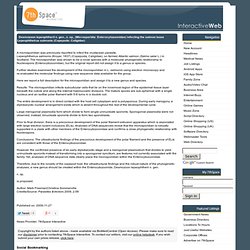 The entire development is in direct contact with the host cell cytoplasm and is polysporous. N. sp. is proposed. Published on: 2009-11-27 News Provider: 7thSpace Interactive. EUROPE - LICE CONTROL ON FISH FARMS. WORLDLIFE 30/04/09 Sea Lice Working Group Report. WWF has identified farmed shrimp and salmon as priority commodities because, collectively, they represent the largest share of the global farmed seafood market. 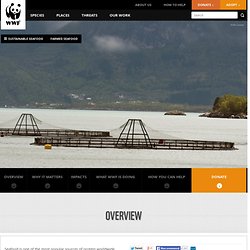 Consequently, they can have a significant negative impact on the places and species we seek to protect. Additionally, we are working to advance responsible seafood farming for abalone, bivalves (clams, mussels, scallops and oysters), cobia, freshwater trout, pangasius, seriola, and tilapia. In 2004, we initiated and coordinated the Aquaculture Dialogues, a series of eight roundtables that included over 2,000 farmers, retailers, NGOs, scientists and other important stakeholders within the aquaculture industry. Together, the group committed to developing measurable and performance-based standards for responsibly farmed seafood. These standards focus on measureable performance and encourage innovation to reduce environmental impacts. PACIFIC SALMON FORUM 16/02/09 SEA LICE AND SALMON FARMS: A SECOND LOOKAN UPDATE OF “SCIENCE AND SEA LICE: WHAT DO WE KNOW?”