VIRUSES 14/09/21 The Effect of Fluctuating Incubation Temperatures on West Nile Virus Infection in Culex Mosquitoes. Temperature plays a significant role in the vector competence, extrinsic incubation period, and intensity of infection of arboviruses within mosquito vectors. 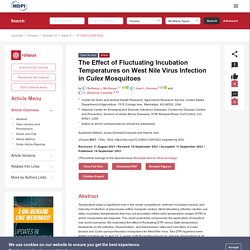 Most laboratory infection studies use static incubation temperatures that may not accurately reflect daily temperature ranges (DTR) to which mosquitoes are exposed. This could potentially compromise the application of results to real world scenarios. We evaluated the effect of fluctuating DTR versus static temperature treatments on the infection, dissemination, and transmission rates and viral titers of Culex tarsalis and Culex quinquefasciatus mosquitoes for West Nile virus. 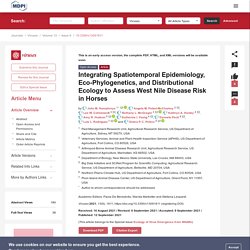 Since the initial introduction of WNV to the United States (US), approximately 30,000 horses have been impacted by West Nile neurologic disease and hundreds of additional horses are infected each year. Research describing the drivers of West Nile disease in horses is greatly needed to better anticipate the spatial and temporal extent of disease risk, improve disease surveillance, and alleviate future economic impacts to the equine industry and private horse owners. VIRUSES 23/06/21 Ecological Effects on the Dynamics of West Nile Virus and Avian Plasmodium: The Importance of Mosquito Communities and Landscape. Humans and wildlife are at risk from certain vector-borne diseases such as malaria, dengue, and West Nile and yellow fevers. 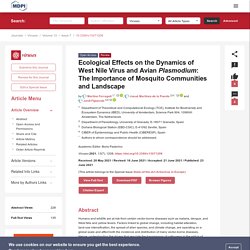 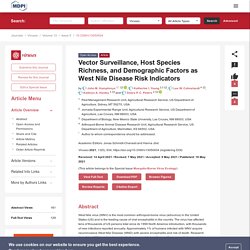 CUREUS 06/02/21 Management of West Nile Encephalitis: An Uncommon Complication of West Nile Virus. The West Nile virus (WNV) is defined by the Centers for Disease Control and Prevention (CDC) as the leading cause of mosquito-borne disease in the continental United States (US) [1]. 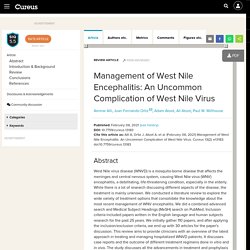 In 1999 to 2017, a reported 48,183 patients were infected with WNV in the US alone [2]. In 2012 several outbreaks occurred in the US, the biggest of which occurred in Dallas, Texas. In that episode, the incidence was 7.3 per 100,000 people, compared with 2.91 per 100,000 in a similar outbreak in 2006 [3]. J Am Mosq Control Assoc. 2020 Jun 1; Temporal and Spatial Impacts of Hurricane Damage on West Nile Virus Transmission and Human Risk. We use a mathematical model based on those described in Robertson and Caillouët (2016) and Beebe and Robertson (2017) to simulate the dynamics of WNV over a single year in each type of damage-affected region. 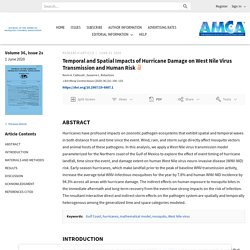 The primary vector of interest is Cx. quinquefasciatus, which is an opportunistic species that feeds on avian hosts, humans, and other nonhuman mammals. The percentage of bites upon each host type is highly variable between studies (Takken and Verhulst 2013) and likely to depend upon the relative densities and exposures of available hosts.

Birds are the primary definitive host for WNV, with species varying greatly in competence or their ability to transmit the pathogen (Komar et al. 2003, Kilpatrick et al. 2007). Here we consider 2 representative species of avian hosts that vary in competence, assuming one species is twice as likely to transmit WNV to susceptible mosquitoes when bitten as the other. Baseline parameters are given in Table 1. PARASITES & VECTORS 24/02/21 Spatio-temporal impacts of aerial adulticide applications on populations of West Nile virus vector mosquitoes. 1.Hayes EB, Sejvar JJ, Zaki SR, Lanciotti RS, Bode AV, Campbell GL. 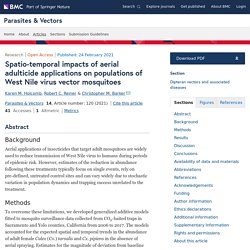 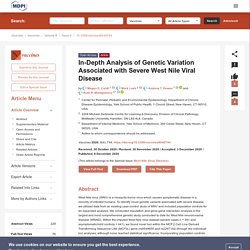 To identify novel genetic variants associated with severe disease, we utilized data from an existing case-control study of WNV and included population controls for an expanded analysis. We conducted imputation and gene-gene interaction analysis in the largest and most comprehensive genetic study conducted to date for West Nile neuroinvasive disease (WNND). Within the imputed West Nile virus dataset (severe cases n = 381 and asymptomatic/mild controls = 441), we found novel loci within the MCF.2 Cell Line Derived Transforming Sequence Like (MCF2L) gene (rs9549655 and rs2297192) through the individual loci analyses, although none reached statistical significance.

This is an open access article distributed under the Creative Commons Attribution License which permits unrestricted use, distribution, and reproduction in any medium, provided the original work is properly cited. PEERJ 27/07/20 Exploring the socio-economic and environmental components of infectious diseases using multivariate geovisualization: West Nile Virus. 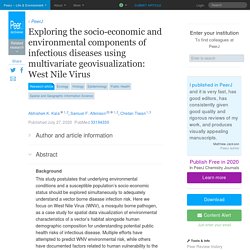 Such variations often manifest themselves in geographic space and can be attributed to complex interactions between the environment, population, and behavior (Meade, 1977). The underlying processes behind these interactions occur at different, and often conflicting spatial and temporal scales. Additionally, the data related to those processes are often collected within different spatial boundaries (e.g., county level versus census tract verses ecosystem) and for differing research purposes. Emerging Microbes & Infections 20/11/20 Competition between Usutu virus and West Nile virus during simultaneous and sequential infection of Culex pipiens mosquitoes. 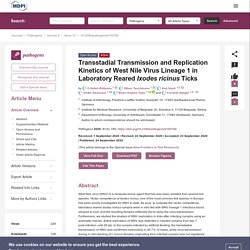 Vector competence of Ixodes ricinus, one of the most common tick species in Europe, has been poorly investigated for WNV to date. As such, to evaluate the vector competence, laboratory reared Ixodes ricinus nymphs were in vitro fed with WNV lineage 1 infectious blood, allowed to molt, and the resulting females artificially fed to study the virus transmission.

Furthermore, we studied the kinetics of WNV replication in ticks after infecting nymphs using an automatic injector. Active replication of WNV was detected in injected nymphs from day 7 post-infection until 28 dpi. In the nymphs infected by artificial feeding, the transstadial transmission of WNV was confirmed molecularly in 46.7% of males, while virus transmission during in vitro feeding of I. ricinus females originating from infected nymphs was not registered. ►▼ Show Figures Figure 1. J Math Biol. 2019 Jul; Spreading speed for a West Nile virus model with free boundary. NEW MICROBIOLOGICA - 2020 - Fatal case of West Nile encephalitis associated with acute anteroseptal ST elevation myocardial infarction (STEMI): a case report. VIRUSES 29/01/20 West Nile or Usutu Virus? A Three-Year Follow-Up of Humoral and Cellular Response in a Group of Asymptomatic Blood Donors.

Genetic variations within populations of Cx. nigripalpus vary in time and space (Nayar, Knight & Munstermann, 2002), including tolerance to organophosphate-based adulticides that occurs in some populations (Boike et al., 1989; Shin & Smartt, 2016). PATHOGENS 07/01/20 Comparative Pathology of West Nile Virus in Humans and Non-Human Animals. West Nile virus (WNV) continues to be a major cause of human arboviral neuroinvasive disease. Susceptible non-human vertebrates are particularly diverse, ranging from commonly affected birds and horses to less commonly affected species such as alligators. This review summarizes the pathology caused by West Nile virus during natural infections of humans and non-human animals. While the most well-known findings in human infection involve the central nervous system, WNV can also cause significant lesions in the heart, kidneys and eyes. Time has also revealed chronic neurologic sequelae related to prior human WNV infection.

Duke's Nicholas School of the Environment VIA YOUTUBE 28/12/10 The Function of Biodiversity in Zoonotic Disease Risk: The Cases of Lyme Disease and West Nile Virus. BIORXIV 16/12/19 The drivers of West Nile virus human illness: fine scale dynamic effects of weather, mosquito infection, social, and biological conditions. PLOS 12/11/19 CRISPR/Cas9 gene editing in the West Nile Virus vector, Culex quinquefasciatus Say. Abstract Culex quinquefasciatus Say is an opportunistic blood feeder with a wide geographic distribution which is also a major vector for a range of diseases of both animals and humans. CRISPR/Cas technologies have been applied to a wide variety of organisms for both applied and basic research purposes. CRISPR/Cas methods open new possibilities for genetic research in non-model organisms of public health importance.

In this work we have adapted microinjection techniques commonly used in other mosquito species to Culex quinquefasciatus, and have shown these to be effective at generating homozygous knock-out mutations of a target gene in one generation. This is the first description of the kmo gene and mutant phenotype in this species. Pathogens. 2019 Oct 16;8(4). Current Understanding of West Nile Virus Clinical Manifestations, Immune Responses, Neuroinvasion, and Immunotherapeutic Implications. MDPI and ACS Style Bai, F.; Thompson, E.A.; Vig, P.J.S.; Leis, A.A.

JOURNAL OF MEDICAL ENTOMOLOGY 24/09/19 Reducing West Nile Virus Risk Through Vector Management. We use cookies to enhance your experience on our website.By continuing to use our website, you are agreeing to our use of cookies. You can change your cookie settings at any time. <a href=" Find out more</a> Skip to Main Content Sign In Register Close. PARASITES & VECTORS 08/08/19 Predicting West Nile virus transmission in North American bird communities using phylogenetic mixed effects models and eBird citizen science data. Model overview We introduce our model by working backwards, from the overarching biological questions to the specifics of individual models. We begin by describing our primary model outcomes. We then explain our method for calculating the R0 of WNV. VIRUSES 05/08/19 Usefulness of Eurasian Magpies (Pica pica) for West Nile virus Surveillance in Non-Endemic and Endemic Situations. Received: 17 June 2019 / Revised: 1 August 2019 / Accepted: 2 August 2019 / Published: 5 August 2019.

VETERINARIA ITALIANA 31/03/19 Immunological response in horses following West Nile virus vaccination with inactivated or recombinant vaccine. Can Vet J. 2018 Oct; 59(10): 1119–1120. West Nile virus in horses — What do you need to know to diagnose the disease? VIRUSES 21/05/19 West Nile Virus Associations in Wild Mammals: An Update. Several wild mammal exposures to WNV have been reported in recent years. While some are consistent with those species that have been reported previously, others represent species with no previous documented exposures.

Parameters included hospitalization, recovery, mortality, risk factors for WNND and risk factors for mortality. Our review highlighted the heterogeneity in epidemiologic patterns across jurisdictions and outbreak seasons, even within North America. While there was consensus that age is a significant risk factor for neuroinvasive disease and death, the association of other sociodemographic and clinical factors was less definitive. Overall, patients with AFP or WNE fared worse than patients with WNM and WNF in terms of hospitalization and mortality. The proportion hospitalized, LOS, proportion discharged home and case-fatality ranged considerably among studies. There was an overall lack of data specific to each WNV syndrome, particularly for AFP and WNME. We included 37 studies based on surveillance and monitoring programs on the national, state and local levels.