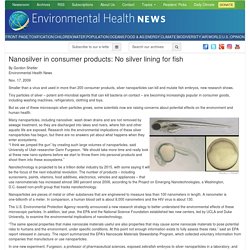 Tiny particles of silver – potent anti-microbial agents that can kill bacteria on contact – are becoming increasingly popular in consumer goods, including washing machines, refrigerators, clothing and toys. But as use of these microscopic silver particles grows, some scientists now are raising concerns about potential effects on the environment and human health. Many nanoparticles, including nanosilver, wash down drains and are not removed by sewage treatment, so they are discharged into lakes and rivers, where fish and other aquatic life are exposed. “I think we jumped the gun” by creating such large volumes of nanoparticles, said University of Utah researcher Darin Furgeson. The U.S. Scientists do not yet understand what this toxicity means to humans and the environment.

Références institutionnelles. Advances in Colloid and Interface Science 145 (2009) 83–96 Silver nanoparticles: Green synthesis and their antimicrobial activi. Critical Reviews in Toxicology, 2010; 40(4): 328–346 A review of the in vivo and in vitro toxicity of silver and gold particulat. Biotechnology Advances 27 (2009) 924–937 Nanosilver—The burgeoning therapeutic molecule and its green synthesis. Nanotoxicology, June 2009; 3(2): 109 138 Nano-silver a review of available data and knowledge gaps in human and environmental r. BLOG COLLOIDAL SILVER SECRETS. THE ECOLOGIST 22/10/09 Behind the Label: nanosilver. The Ecologist has long been sceptical of the necessity and safety of antibacterial toiletries and household cleaners. 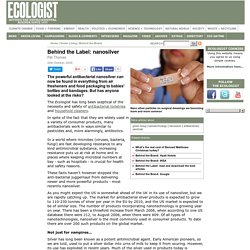 In spite of the fact that they are widely used in a variety of consumer products, many antibacterials work in ways similar to pesticides and, more alarmingly, antibiotics. In a world where microbes (viruses, bacteria, fungi) are fast developing resistance to any kind antimicrobial substance, increasing resistance puts us at risk at home and in places where keeping microbial numbers at bay - such as hospitals - is crucial for health and safety reasons. These facts haven't however stopped the anti-bacterial juggernaut from delivering newer and more powerful products - most recently nanosilver. As you might expect the US is somewhat ahead of the UK in its use of nanosilver, but we are rapidly catching up.

The market for antibacterial silver products is expected to grow to 110-230 tonnes of silver per year in the EU by 2010, and the US market is expected to be of similar size. BLOG MY OPERA 01/03/10 Nano Silver Kills HIV And Other Viruses On Contact. AUTEX Research Journal, Vol. 9, No1, March 2009 USE OF NANO SILVER AS AN ANTIMICROBIAL AGENT FOR COTTON. RUDAR - Roskilde University Digital Archive - Project spring 2010 - Uptake and Toxicity of Silver Ions, Nanoparticlses and Micro. NATURAL NEWS 23/06/08 Legal Action Filed to Outlaw Nano-Silver Products. Nano Silver - Nano Argento. Nano Silver Powder, 99.99% Ag, APS 40nm, INDIA. Wholesale Distribuitor Of Nano Silver Dispersions. Nano-Silver. Rev.Adv.Mater.Sci 18(2008) Novel technique for preparing a nano-silver water suspension by the arc-discharge method. 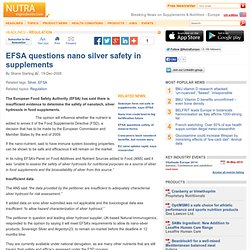 The opinion will influence whether the nutrient is added to annex II of the Food Supplements Directive (FSD), a decision that has to be made by the European Commission and Member States by the end of 2009. If the nano-nutrient, said to have immune system boosting properties, can be shown to be safe and efficacious it will remain on the market. In its ruling EFSA’s Panel on Food Additives and Nutrient Sources added to Food (ANS) said it was “unable to assess the safety of silver hydrosols for nutritional purposes as a source of silver in food supplements and the bioavailability of silver from this source.” Insufficient data The ANS said “the data provided by the petitioner are insufficient to adequately characterise silver hydrosol for risk assessment.”