EDF_org - Perchlorate in food. Perchlorate is one of approximately 10,000 chemicals allowed for use in food and food packaging – and it’s also an ingredient in rocket fuel. 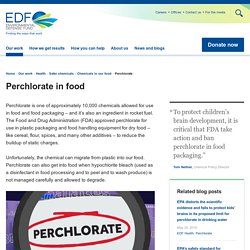 The Food and Drug Administration (FDA) approved perchlorate for use in plastic packaging and food handling equipment for dry food – like cereal, flour, spices, and many other additives – to reduce the buildup of static charges. Unfortunately, the chemical can migrate from plastic into our food. Perchlorate can also get into food when hypochlorite bleach (used as a disinfectant in food processing and to peel and to wash produce) is not managed carefully and allowed to degrade.

J. Agric. Food Chem. 2005 Accumulation and Perchlorate Exposure Potential of Lettuce Produced in the Lower Colorado River Region. J. Agric. Food Chem.2004,52,3456−3461 A Study on Perchlorate Exposure and Absorption in Beef Cattle. J. AGRIC FOOD CHEM - 2009 - Estimated Dietary Exposure of Canadians to Perchlorate through the Consumption of Fruits and Vegetables Available in Ottawa Markets. THE AMERICAN COUNCIL ON SCIENCE AND HEALTH - JANV 2002 -  Perchlorate in Drinking Water - Scientific Collaboration in Defining S. Executive Summary Since the mid-1990s, there has been an increasing amount of research effort aimed at evaluating the potential human health risk of perchlorate (ClO4) because of its presence at trace levels in some water systems. 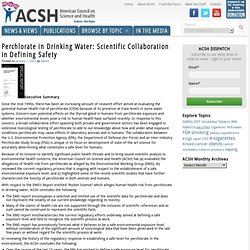 Concern over potential effects on the thyroid gland in humans from perchlorate exposure and whether environmental levels pose a risk to human health have surfaced recently. In response to this concern, a broad collaborative effort spanning both private and government sectors has been engaged in extensive toxicological testing of perchlorate to add to our knowledge about how and under what exposure conditions perchlorate may cause effects in laboratory animals and in humans. The collaboration between the U.S. With respect to the EWG’s Report entitled “Rocket Science” which alleges human health risk from perchlorate in drinking water, ACSH concludes the following:

American Chemical Society - 2005 - Perchlorate and nitrate in leafy vegetables of North America. Journal of Environmental Quality 02/04/14 Soil, Plant, and Terrain Effects on Natural Perchlorate Distribution in a Desert Lands. COMMISSION EUROPEENNE 16/07/13 Statement as regards the presence of perchlorate in food agreed by the Standing Committee of the. BFR 28/06/13 Health assessment of perchlorate residues in foods. Water 2013, 5(2), 767-779 Determination of Perchlorate in Bottled Water from Italy. 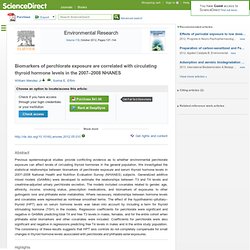 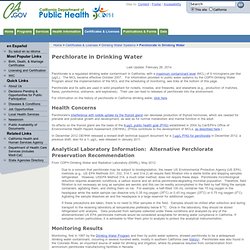 The MCL became effective October 2007. For information provided to public water systems by the CDPH Drinking Water Program about the implementation of the MCL and the scheduling of monitoring, see links at the bottom of this page. Perchlorate and its salts are used in solid propellant for rockets, missiles, and fireworks, and elsewhere (e.g., production of matches, flares, pyrotechnics, ordnance, and explosives). Perchlorate. Production and use[edit] Perchlorate salts are produced industrially by the oxidation of solutions of sodium chlorate by electrolysis. 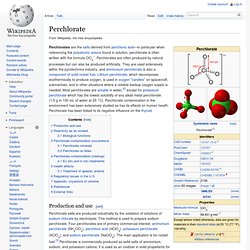 Potassium perchlorate has, in the past, been used therapeutically to treat hyperthyroidism resulting from Graves' disease.[4] Perchlorate is of concern because of uncertainties about toxicity and health effects at low levels in drinking water, impact on ecosystems, and indirect exposure pathways for humans due to accumulation in vegetables.[4] Virginia Polytechnic Institute and State University - AVRIL 2008 - Thèse en ligne : Effects of ammonium perchlorate exposure on. Stony Brook University - AOUT 2008 - Dissertation en ligne : Nonpoint sources of nitrate and perchlorate in urban land use to g. 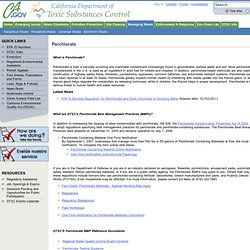 The Perchlorate Best Management Practices were adopted on December 31, 2005 and became operative on July 1, 2006. If you are in the Department of Defense or you are in an industry centered on aerospace, fireworks, pyrotechnics, amusement parks, automobile air bag and safety restraint, lithium perchlorate batteries, or if you are in a public safety agency, the Perchlorate BMPs may apply to you. Others that may be affected by these regulations include farmers who use perchlorate-containing fertilizer, laboratories, bleach manufacturers and users, and Publicly Owned Treatment Works (POTWs).

Even households may be affected. For more information, please contact Ed Nieto at (916) 322-7893. EPA - MAI 2001 - Survey of Fertilizers and Related Materials for Perchlorate (ClO4–) EPA 24/06/02 REPORT ON THE PEER REVIEW OF THE U.S. ENVIRONMENTAL PROTECTION AGENCY'S DRAFT EXTERNAL REVIEW DOCUMENT "PERCHLORATE. Archive disclaimerArchived files are provided for reference purposes only. 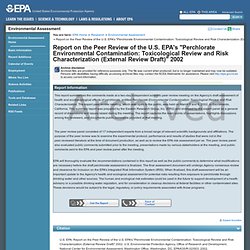 The file was current when produced, but is no longer maintained and may now be outdated. Persons with disabilities having difficulty accessing archived files may contact the NCEA Webmaster for assistance. Please visit to access current information. Report Information This report summarizes the comments made at a two-day independent scientific peer review meeting on the Agency's draft assessment of health and ecotoxicological effects of perchlorate, entitled Perchlorate Environmental Contamination: Toxicological Review and Risk Characterization. The peer review panel consisted of 17 independent experts from a broad range of relevant scientific backgrounds and affiliations. EPA will thoroughly evaluate the recommendations contained in this report as well as the public comments to determine what modifications are necessary before the draft perchlorate assessment is finalized. 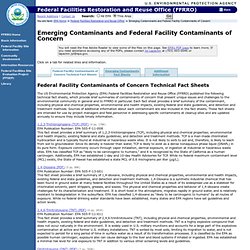 Each fact sheet provides a brief summary of the contaminant, including physical and chemical properties, environmental and health impacts, existing federal and state guidelines, and detection and treatment methods. Sources of additional information about each contaminant are also included in the fact sheets. These fact sheets are intended for use by project managers and field personnel in addressing specific contaminants at cleanup sites and are updated annually to ensure they include timely information. Www4 redirects. AGENCY FOR TOXIC SUBSTANCES & DISEASE REGISTRY - SEPT 2008 - ToxFAQs™ for Perchlorates. ToxFAQsTM for Perchlorates (Percloratos) September 2008 PDF Version, 38 KB This fact sheet answers the most frequently asked health questions (FAQs) about perchlorates. 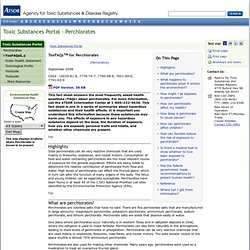 For more information, call the ATSDR Information Center at 1-800-232-4636. GAO JUIN 2005 PERCHLORATE - A System to Track Sampling and Cleanup - Results Is Needed.