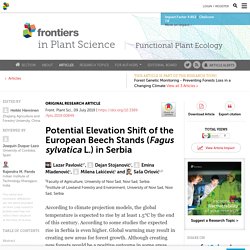 The expected rise of the global temperature will create new forest areas, particularly in northern zones and at higher elevations. Moreover, increased carbon dioxide concentrations in the atmosphere will further accelerate forest growth (Silva et al., 2016). Although creating new forests is a beneficial outcome of climate change in some areas, other areas would, in contrast, be exposed to high temperature extremes, drought, wildfire, etc., leading to forest loss and the shift of geographical areas or even extinction of plant species (IPCC and Core Writing Team, 2014; Tian et al., 2016).

Species distribution models (SDMs) are useful tools for developing strategies and adaptation policies to climate change. FORESTS 28/07/19 Analyzing Spatial Distribution Patterns of European Beech (Fagus sylvatica L.) Regeneration in Dependence of Canopy Openings. The use of natural regeneration techniques is one of the key elements of modern (close-to-nature) forestry. 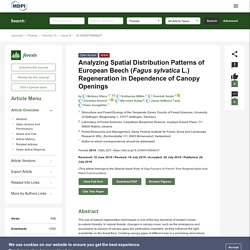 In natural forests, changes in canopy cover, such as the emergence and successive re-closure of canopy gaps are particularly important, as they influence the light availability on the forest floor. Creating canopy gaps of different size is a promising silvicultural tool allowing the regulation of the light availability in managed forests in order to control regeneration composition and development. FORESTS 13/07/19 Exploring Nonlinear Intra-Annual Growth Dynamics in Fagus sylvatica L. Trees at the Italian ICP-Forests Level II Network. 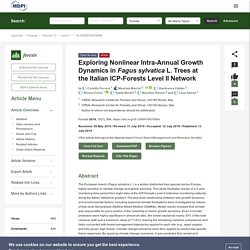 This study illustrates results of a 5-year monitoring time period from eight sites of the ICP-Forests Level II (intensive monitoring network) along the Italian latitudinal gradient. The tree-level relationship between tree growth dynamics and environmental factors, including seasonal climate fluctuations were investigated by means of tree-level Generalized Additive Mixed Models (GAMMs). Model results revealed that climate was responsible for just a portion of the variability in beech growth dynamics. Even if climatic predictors were highly significant in almost all sites, the model explained nearly 30% of the total variance (with just a maximum value of 71.6%), leaving the remaining variance unexplained and likely connected with forest management trajectories applied to each site (e.g., aged coppice and fully grown high forest). 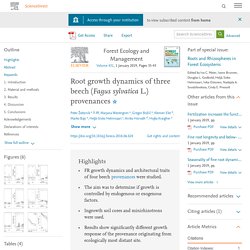 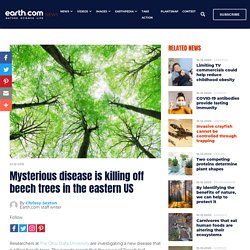 The experts report that the cause of “beech leaf disease” needs to be identified as soon as possible to stop it from continuing to spread. The disease has already made its way into 11 Ohio counties, eight Pennsylvania counties, and five counties in Ontario, Canada. The first sign of the disease is the appearance of dark-green bands between the veins of the leaves. In later stages, the leaves become crinkly, leathery, and darker all over. Ultimately, the tree limbs fail to form new buds and the tree dies. Senior researcher Pierluigi “Enrico” Bonello is a professor of Plant Pathology at Ohio State. 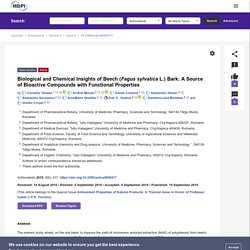 Introduction Bark plays an important role in protecting woody vascular plants, especially through its content in bioactive compounds with an antimicrobial effect [1]. The bark of woody plants is considered to be a by-product of the forestry and wood industry. This can be an important source of bioactive compounds with a high recovery potential. Numerous studies show the importance and value of bark. ACTA OECOLOGICA - 1995 - Long-term growth trends of Fagus sylvatica L. in northeastern France. A comparison between high and low density stands. DRAAF GRAND EST 28/08/20 Un nouvel épisode diffile pour les hêtres : quelques préconisations de gestion.

GLOBAL ECOLOGY AND BIOGEOGRAPHY 04/06/19 Range‐wide variation in local adaptation and phenotypic plasticity of fitness‐related traits in Fagus sylvatica and their implications under climate change. Aim To better understand and more realistically predict future species distribution ranges, it is critical to account for local adaptation and phenotypic plasticity in populations' responses to climate. 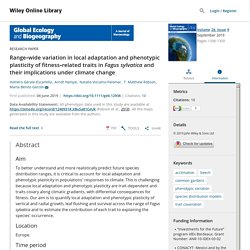 This is challenging because local adaptation and phenotypic plasticity are trait‐dependent and traits covary along climatic gradients, with differential consequences for fitness. Our aim is to quantify local adaptation and phenotypic plasticity of vertical and radial growth, leaf flushing and survival across the range of Fagus sylvatica and to estimate the contribution of each trait to explaining the species' occurrence. 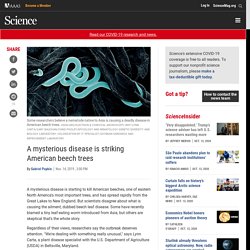 GEORG AUGUST UNIVERSITAT GOTTINGEN 06/06/18 Dissertation en ligne : Structure, Productivity and Carbon Storage of Primeval European Beech Forests. <div>Please enable JavaScript in your browser to use all functions of this website. 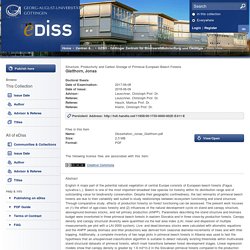 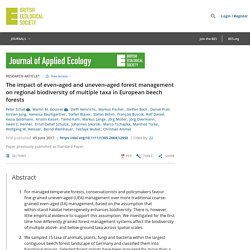 In countries of the temperate zone, two approaches for reducing biodiversity loss in managed forests are currently being discussed: (1) to reject complete biomass removals by leaving retention trees (Lindenmayer et al., 2012) and (2) to manage at a rather fine spatial grain by single tree or group selection cuttings leading to uneven‐aged (UEA) forests (Puettmann et al., 2015). Both alternatives attempt to ensure habitat continuity (Fritz, Gustafsson, & Larsson, 2008; Grove, 2002). In clear‐cut systems, it is suggested that some trees be retained to carry‐over structural elements into the next rotation (Gustafsson, Kouki, & Sverdrup‐Thygeson, 2010; Lindenmayer et al., 2012).

A 10-year-old sapling will stand about 4 m (13 ft) tall. The leaves are alternate, simple, and entire or with a slightly crenate margin, 5–10 cm long and 3–7 cm broad, with 6-7 veins on each side of the leaf (7-10 veins in Fagus orientalis). The leaves of beech are often not abscissed in the autumn and instead remain on the tree until the spring. WIKIPEDIA – Hêtre commun. Annals of Forest Science 62, 7 (2005) 625-632 Studies on European beech (Fagus sylvatica L.). Part 1 : variations of wood colour. Trees (2007) 21:1–11 Potential risks for European beech (Fagus sylvatica L.) in a changing climate.