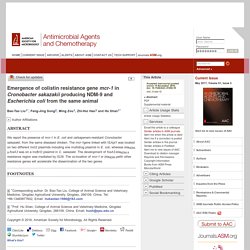 The mcr-1gene linked with ISApl1 was located on two different IncI2 plasmids including one multidrug plasmid in E. coli, whereas blaNDM-9-fosA3 was on a IncB/O plasmid in C. sakazakii. The development of fosA3-blaNDM-9 resistance region was mediated by IS26. The co-location of mcr-1 or blaNDM-9with other resistance genes will accelerate the dissemination of the two genes. ↵*Corresponding author: Dr. Copyright © 2016, American Society for Microbiology. 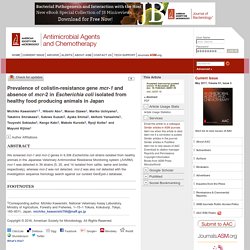 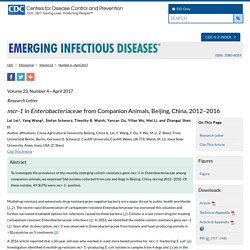 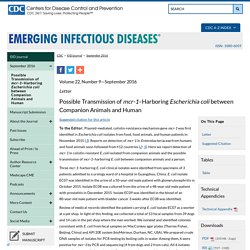 Reports on detection of mcr-1 in Enterobacteriaceae from humans and food animals soon followed from ≈12 countries (2–5). Here we report detection of mcr-1 in colistin-resistant E. coli isolated from companion animals and the possible transmission of mcr-1–harboring E. coli between companion animals and a person. Three mcr-1–harboring E. coli clinical isolates were identified from specimens of 3 patients admitted to a urology ward of a hospital in Guangzhou, China. E. coli isolate EC07 was identified in the urine of a 50-year-old male patient with glomerulonephritis in October 2015. Review of medical records identified the patient carrying E. coli isolate EC07 as a worker at a pet shop. 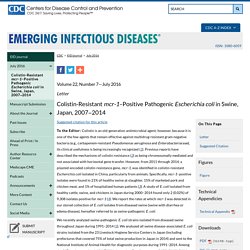 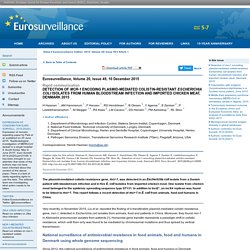 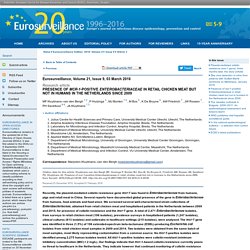 Presence of mcr-1-positive Enterobacteriaceae in retail chicken meat but not in humans in the Netherlands since 2009. Euro Surveill. 2016;21(9):pii=30149. DOI: Received:23 December 2015; Accepted:01 February 2016 Introduction The worldwide emergence of extended-spectrum beta-lactamases (ESBL) and carbapenemases has limited the available treatment options for infections with Gram-negative bacteria [1]. EUROPEAN MEDICINES AGENCY 11/01/16 EMA advice on use of colistin in animals to be updated. EMA acts upon request from European Commission following detection of colistin-resistant bacteria The European Medicines Agency (EMA) has received a request from the European Commission to update its advice on the use in animals of colistin, which is one of the last-resort antibiotics to treat certain bacterial infections in humans. 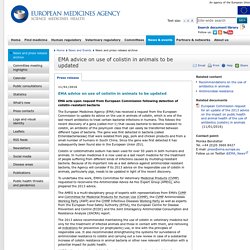 This follows the recent discovery of a gene (called mcr-1) that causes bacteria to become resistant to colistin, an antibiotic of the polymyxin class that can easily be transferred between different types of bacteria. The gene was first detected in bacteria (called Enterobacteriaceae) that were isolated from pigs, pork and chicken products and from a small number of humans in South China. Since the gene was first detected it has subsequently been found also in the European Union (EU). Colistin or colistimethate sodium has been used for over 50 years in both humans and animals. Notes: REUTERS 19/11/15 New "Superbug" Gene Found in Animals and People in China. A new gene that makes bacteria highly resistant to a last-resort class of antibiotics has been found in people and pigs in China - including in samples of bacteria with epidemic potential, researchers said on Wednesday. 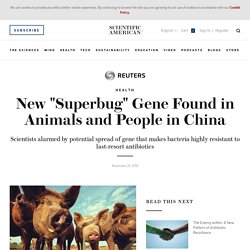 The discovery was described as "alarming" by scientists, who called for urgent restrictions on the use of polymyxins - a class of antibiotics that includes the drug colistin and is widely used in livestock farming. "All use of polymyxins must be minimized as soon as possible and all unnecessary use stopped," said Laura Piddock, a professor of microbiology at Britain's Birmingham University who was asked to comment on the finding. Researchers led by Hua Liu from the South China Agricultural University who published their work in the Lancet Infectious Diseases journal found the gene, called mcr-1, on plasmids - mobile DNA that can be easily copied and transferred between different bacteria. 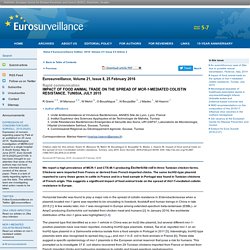 Impact of food animal trade on the spread of mcr-1-mediated colistin resistance, Tunisia, July 2015. Euro Surveill. 2016;21(8):pii=30144. DOI: Received:08 February 2016; Accepted:25 February 2016. BFR 07/01/16 Transferrable colistin resistance found in bacteria from German farm animals. The BfR draws attention to the transferability of a resistance gene in human and veterinary medicine Early results from resistance monitoring conducted at the Federal Institute for Risk Assessment (BfR) show that the transferrable gene mcr-1 which was first detected in China and which causes resistance to the antibiotic colistin is also widespread in intestinal bacteria in farm animals in Germany.

Most frequently, this colistin resistance is detected in Escherichia coli of fattening poultry. Transferrable resistance genes can be passed on from harmless intestinal bacteria, so-called commensal bacteria, to pathogens thus making these pathogens harder to treat. It was previously assumed that resistance to colistin could not be transferred between bacteria. The proportion of colistin-resistant bacteria isolates in German farm animals has not increased in recent years. In Germany, the polypeptide antibiotic colistin is used predominantly for treating intestinal disease in farm animals. Up. PIGSITE 03/06/16 Colistin Resistance Found in Pig in US.

News Colistin Resistance Found in Pig in US 03 June 2016 ANALYSIS - Scientists in the US have discovered a strain of E.coli resistant to the antibiotic colistin in the intestine of a pig. The discovery comes at the same time as researchers at the Walter Reed Research Institute in the US identifies the first colistin resistant mcr-1 E.coli in a person. The colistin resistant E.coli discovered in the pig’s intestine has the same mcr-1 gene.

It was discovered by scientists from the USDA and Department of Health and Human Services searching for colistin-resistant bacteria in food animals, retail meats and people. The HSS said that the two discoveries are of concern because colistin is used as a last resort drug to treat patients with multi-drug resistant infections. The discovery follows the first reports from China last November that bacteria containing the mcr-1 gene could be resistant to colistin. Congresswoman Louise M. “We need swift, aggressive, global action to stop this in its tracks—now. PIGSITE 25/02/16 Colistin - The Latest European Antibiotic Resistance Challenge. News.