International Journal of Infectious Diseases Available online 10 February 2021 Outbreaks of Foodborne Salmonella Enteritidis in The United States 1990-2015: Epidemiologic and Spatial-temporal Trends Analyses. ANTIBIOTICS 19/10/21 Investigation of the Genes Involved in the Outbreaks of Escherichia coli and Salmonella spp. in the United States. Salmonella spp. and Escherichiacoli (E. coli) are two of the deadliest foodborne pathogens in the US. 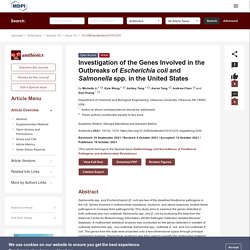 Genes involved in antimicrobial resistance, virulence, and stress response, enable these pathogens to increase their pathogenicity. This study aims to examine the genes detected in both outbreak and non-outbreak Salmonella spp. and E. coli by analyzing the data from the National Centre for Biotechnology Information (NCBI) Pathogen Detection Isolates Browser database. A multivariate statistical analysis was conducted on the genes detected in isolates of outbreak Salmonella spp., non-outbreak Salmonella spp., outbreak E. coli, and non-outbreak E. coli. The genes from the data were projected onto a two-dimensional space through principal component analysis. Hierarchical clustering was then used to quantify the relationship between the genes in the dataset. ►▼ Show Figures Figure 1. 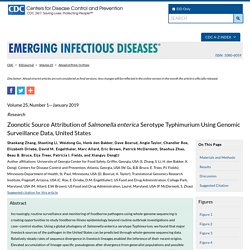 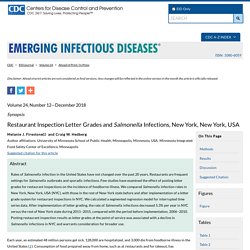 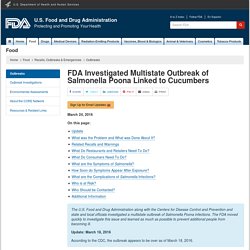 Food and Drug Administration along with the Centers for Disease Control and Prevention and state and local officials investigated a multistate outbreak of Salmonella Poona infections. The FDA moved quickly to investigate this issue and learned as much as possible to prevent additional people from becoming ill. PLOS 23/12/15 Salmonella enterica Infections in the United States and Assessment of Coefficients. Abstract Background Despite control efforts, salmonellosis continues to cause an estimated 1.2 million infections in the United States (US) annually. 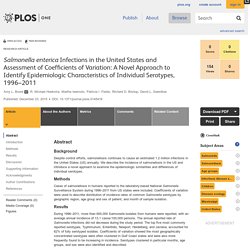 We describe the incidence of salmonellosis in the US and introduce a novel approach to examine the epidemiologic similarities and differences of individual serotypes. Methods Cases of salmonellosis in humans reported to the laboratory-based National Salmonella Surveillance System during 1996–2011 from US states were included. Results. FOODSAFETY_GOV 15/01/15 Sneaky Salmonella: It’s Common, Costly, and Preventable (infographie présentant les principaux indicateurs aux USA)

Use the link to download the Salmonella by the Numbers Infographic. 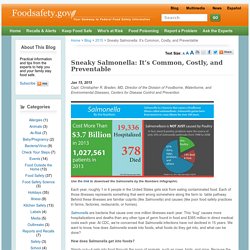 INTECH - JANV 2012 - Salmonella - A Dangerous Foodborne PathogenAu sommaire:The Burden of Salmonellosis in the United States. Edited by Barakat S. M. Mahmoud, ISBN 978-953-307-782-6, 450 pages, Publisher: InTech, Chapters published January 20, 2012 under CC BY 3.0 licenseDOI: 10.5772/1308 More than 2,500 serotypes of Salmonella exist. However, only some of these serotypes have been frequently associated with food-borne illnesses.

Salmonella is the second most dominant bacterial cause of food-borne gastroenteritis worldwide. Chapter 1 The Burden of Salmonellosis in the United Statesby Patricia L. CDC MMWR 24/12/10 Salmonella Montevideo Infections Associated with Salami Products Made with Contaminated Imported Black and Red. BMC - 2009 - Geographic variations and temporal trends of Salmonella-associated hospitalization in the U.S. elderly, 1991-2004: Is the HACCP regulation associated with lower salmonellosis rates? 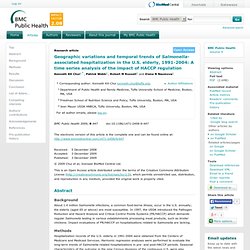 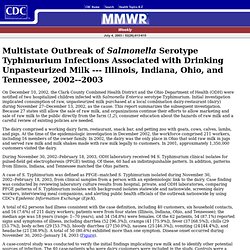 Initial investigation implicated consumption of raw, unpasteurized milk purchased at a local combination dairy-restaurant (dairy) during November 27--December 13, 2002, as the cause. This report summarizes the subsequent investigation. Because 27 states still allow the sale of raw milk, and organizations continue their efforts to allow marketing and sale of raw milk to the public directly from the farm (1,2), consumer education about the hazards of raw milk and a careful review of existing policies are needed. CDC MMWR 03/01/03 Outbreaks of Salmonella Serotype Enteritidis Infection Associated with Eating Shell Eggs. A Salmonella serotype Enteritidis (SE) epidemic emerged in the 1980s, when increasing numbers of infections were detected in the Northeastern and Mid-Atlantic regions of the United States (1). 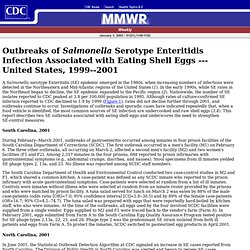 In the early 1990s, while SE rates in the Northeast began to decline, the SE epidemic expanded to the Pacific region (2). Nationwide, the number of SE isolates reported to CDC peaked at 3.8 per 100,000 population in 1995. Although rates of culture-confirmed SE infection reported to CDC declined to 1.9 by 1999 (Figure 1), rates did not decline further through 2001, and outbreaks continue to occur. 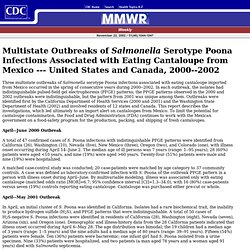 In each outbreak, the isolates had indistinguishable pulsed-field gel electrophoresis (PFGE) patterns; the PFGE patterns observed in the 2000 and 2002 outbreaks were indistinguishable, but the pattern from 2001 was unique among them. Outbreaks were identified first by the California Department of Health Services (2000 and 2001) and the Washington State Department of Health (2002) and involved residents of 12 states and Canada. This report describes the investigations, which led ultimately to an import alert on cantaloupes from Mexico. To limit the potential for cantaloupe contamination, the Food and Drug Administration (FDA) continues to work with the Mexican government on a food-safety program for the production, packing, and shipping of fresh cantaloupes.