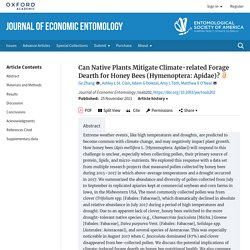 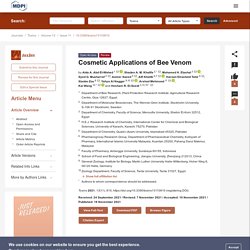 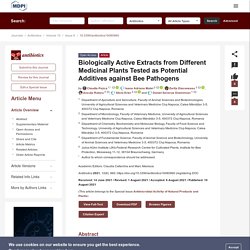 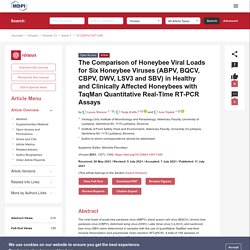 A total of 108 samples of healthy adult honeybees from four differently located apiaries and samples of honeybees showing different clinical signs of viral infections from 89 apiaries were collected throughout Slovenia. The aim of this study was to discover correlations between viral loads and clinical signs in adult honeybees and confirm previously set threshold viral load levels between healthy and clinically affected honeybees. Within this study, two new RT-qPCR assays for quantification of LSV3 and SBV were developed. ►▼ Show Figures Figure 1. ANTIBIOTICS 13/06/21 Bee Pollen and Bee Bread as a Source of Bacteria Producing Antimicrobials. The principal objective of the study was the isolation and identification of bacteria that are present in mature bee bread (BB) and dried (ready for selling and consumption) bee pollen (BP). 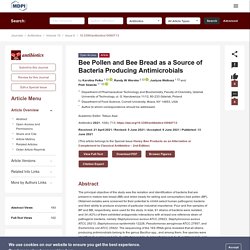 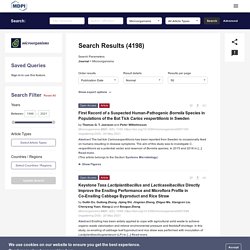 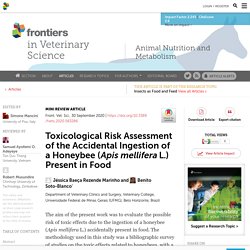 These bees have a sting as their defense mechanism, through which their venom is inoculated (1, 2). As honeybees seek products with sugar as their food source, they may end up trapped and incorporated into food (Figure 1), and potentially consumed inadvertently. A number of anecdotal reports of accidental ingestion of insects are largely available (3–6), but the actual number remains unknown. Figure 1. The intentional consumption of insects by humans, known as entomophagy, is a habit of many populations around the world. However, there is a lack of information in the literature on the toxicological risks arising from the ingestion of raw honeybees.

The Honeybee Venom The honeybee sting is a defensive mechanism against predator attacks on individuals or hives (9–11). VETERINARY SCIENCES 06/05/20 Using Manual and Computer-Based Text-Mining to Uncover Research Trends for Apis mellifera. Honey bee research is believed to be influenced dramatically by colony collapse disorder (CCD) and the sequenced genome release in 2006, but this assertion has never been tested. 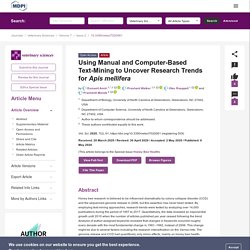 By employing text-mining approaches, research trends were tested by analyzing over 14,000 publications during the period of 1957 to 2017. Quantitatively, the data revealed an exponential growth until 2010 when the number of articles published per year ceased following the trend. Analysis of author-assigned keywords revealed that changes in keywords occurred roughly every decade with the most fundamental change in 1991–1992, instead of 2006. This change might be due to several factors including the research intensification on the Varroa mite. The genome release and CCD had quantitively only minor effects, mainly on honey bee health-related topics post-2006. ►▼ Show Figures Figure 1 ►▼ Show Figures. 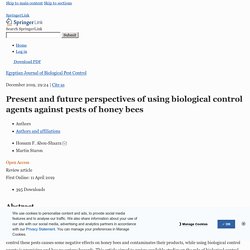 The common microbial agent, is the entomopathogenic bacteria, Bacillus thuringiensis (Bt) (Burges 1978) that applies on empty combs. Bt produces a variety of stomach toxins to larvae. Presently, there are some commercial formulations of Bt available for controlling wax moths in stored combs. But the efficacy of Bt is not persistence (Kwadha et al. 2017). Parasitoids The parasitoids, especially Bracon hebetor (Say.) and Apanteles galleriae (Wilkinson) (Hymenoptera: Braconidae), are potential biocontrol agents to wax moths (Kwadha et al. 2017). 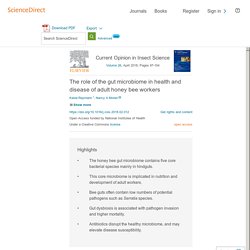 Please enable JavaScript to use all the features on this page. Open Access funded by National Institutes of Health open access Highlights The honey bee gut microbiome contains five core bacterial species mainly in hindguts. APIDOLOGIE - 2011 - Evaluation of colony losses in Israel in relation to the incidence of pathogens and pests. Annals of Agrarian Science Volume 14, Issue 3, September 2016, Protection of honeybee Apis mellifera by its endogenous and exogenous lactic flora against bacterial infections. Introduction Several multifaceted benefits of the symbiosis of insects and their microbiota have been proposed and intensively studied. The composition of the gut bacterial communities of social insects has been shaped by coevolution.

The social behavior of honeybees provides favorable conditions for the exchange of the symbiont microbes [1] and these microorganisms are efficiently transmitted between bee colony members and their different generations. Wilderness Environ Med. 2016 Jun;27(2):262-5. First Reported Case of Fatal Stinging by the Large Carpenter Bee Xylocopa tranquebarica. In the class Insecta, members of the order Hymenoptera are best known for their role in pollination, biological control of insect pests, and as stinging insects.

Of the Hymenoptera, bees, hornets, and wasps in particular are distinct and unique in having a modified ovipositor as a stinger that acts in association with a venom gland. Stinging attacks by bees and wasps on humans have become a common occurrence in Sri Lanka.1, 2, 3 In 2014, a fatal sting from a flying insect in Puttalam in the North Western Province of Sri Lanka gained much publicity in the local media. This incident, reported in the local newspapers and social media, prompted us to find the offending insect that was killed by the victim’s companion. Bees of the world are classified into 7 families.

PLOS 24/02/16 How Hives Collapse: Allee Effects, Ecological Resilience, and the Honey Bee. Introduction Honey bees (Apis mellifera), in addition to generating a wide range of hive products for human consumption, provide irreplaceable pollination services to agricultural and natural ecosystems. Although the domestication of the honey bee is closely connected to the evolution of food-based socio-economic systems in many cultures throughout the world [1], in current economic terms, and in the U.S. alone, the estimated wholesale value of honey, more than $320 million dollars in 2014 [2], pales in comparison to aggregate estimated annual value of pollination services, variously valued at $11–15 billion [3]. Yet, it is generally agreed that domestic and feral honey bees in North America are in crisis due to a variety of stressors including pathogens, parasites, the rigors of migratory beekeeping associated with pollination of crops like California almonds, as well as environmental factors such an forage availability and xenobiotics [4, 5, 6, 7, 8, 9, 10].

Honey Bee Model Fig 1. . Apidologie (2012) 43:195–200 Cooperative wasp-killing by mixed-species colonies of honeybees, Apis cerana and Apis mellifera. ORGANIC TRADE ASSOCIATION - JUIN 2015 - Organic is bee-friendly, shows new report. An important and timely report just released by The Organic Center shows that organic farming practices are effective in maintaining the health and population of important crop pollinators, predominantly bees, which have been declining at an alarming rate in the past decade and threatening global food security. Titled “The Role of Organic in Supporting Pollinator Health,” the report reviewed 71 studies detailing current threats to our pollinators and the impact of organic practices.

It found that organic methods not only reduce risks to bees, but actively support the growth and health of populations of bees and other pollinators. The paper outlines pollinator-friendly techniques used by organic farmers that can also be incorporated into conventional farming systems. “Our paper takes an in-depth look at the challenges faced by honey bees and other pollinators, and we look at organic as a model for supporting pollinator populations,” said Dr. Organic as the solution. Viruses 2012, 4, 1093-1103; Molecular Identification of Chronic Bee Paralysis Virus Infection in Apis mellifera Colonies in Japa. INTECH 11/04/12 New Perspectives in Plant Protection. Au sommaire:Honeybee Communication and Pollination. Edited by Ali R. Bandani, ISBN 978-953-51-0490-2, 258 pages, Publisher: InTech, Chapters published April 11, 2012 under CC BY 3.0 licenseDOI: 10.5772/2299 Crop losses by pests (insects, diseases and weeds) are as old as plant themselves but as agriculture are intensified and cropping patterns including the cultivation of high yielding varieties and hybrids are changing over time the impact of the pests becoming increasingly important.

APIACTA - 2003 - Current status of analytical methods for the detectio of residues in bee products. Genetics and Molecular Biology, 26, 1, 47-52 (2003) Genetic structure of honeybee populations from southern Brazil and Uruguay.