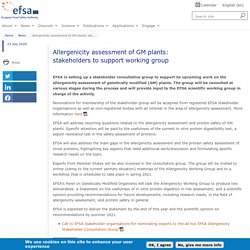 The group will be consulted at various stages during the process and will provide input to the EFSA scientific working group in charge of the activity. Nominations for membership of the stakeholder group will be accepted from registered EFSA stakeholder organisations as well as non-registered bodies with an interest in the area of allergenicity assessment. More information here. EFSA will address recurring questions related to the allergenicity assessment and protein safety of GM plants. Specific attention will be paid to the usefulness of the current in vitro protein digestibility test, a pepsin resistance test in the safety assessment of proteins. Experts from Member States will be also involved in the consultation group. EFSA 25/03/21 Administrative guidance for the preparation of applications on genetically modified plants. EFSA 20/08/18 Explanatory note on the determination of newly expressed protein levels in the context of genetically modified plant applications for EU market authorisation. 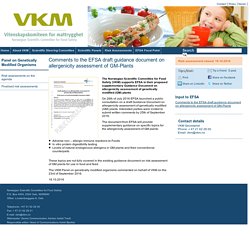 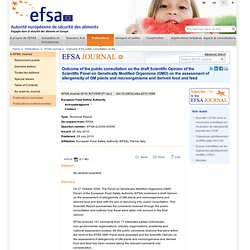 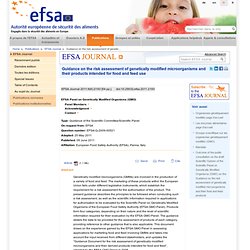 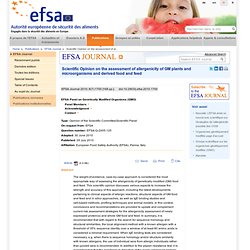 This scientific opinion discusses various aspects to increase the strength and accuracy of this approach, including the latest developments pertaining to clinical aspects of allergic reactions, structural aspects of GM food and feed and in silico approaches, as well as IgE binding studies and cell-based methods, profiling techniques and animal models. 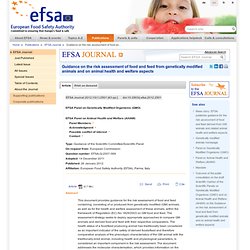 Doherr, Mariano Domingo, Jörg Hartung, Linda Keeling, Frank Koenen, Simon More, David Morton, Pascal Oltenacu, Fulvio Salati, Mo Salman, Moez Sanaa, James M. Sharp, Jan A. Stegeman, Endre Szücs, Hans-H. One member of the GMO Panel did not participate in the discussion on the subject referred to above because of potential conflict of interest identified in accordance with the EFSA policy on declarations of interests.Contact. EFSA 06/07/20 Assessment of the outcomes of the project “Risk Assessment of Genetically Engineered Organisms in the EU and Switzerland” (RAGES) EFSA 13/05/20 Annual Report of preparatory activities for the evaluation of toxicity studies supporting the GM food/feed safety assessment, performed during the period 28/11/2018 to 5/12/2019. 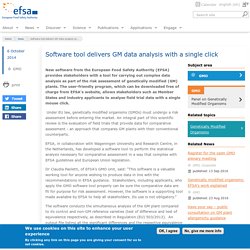 An integral part of this scientific review is the evaluation of field trials that provide data for comparative assessment - an approach that compares GM plants with their conventional counterparts. EFSA, in collaboration with Wageningen University and Research Centre, in the Netherlands, has developed a software tool to perform the statistical analysis necessary for comparative assessment in a way that complies with EFSA guidelines and European Union legislation. Dr Claudia Paoletti, of EFSA’s GMO Unit, said: “This software is a valuable working tool for anyone wishing to produce data in line with the recommendations in EFSA guidance. Stakeholders, including applicants, who apply the GMO software tool properly can be sure the comparative data are fit for purpose for risk assessment. 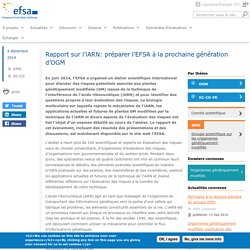 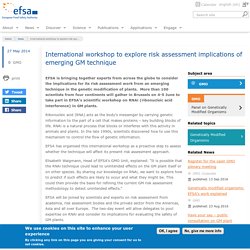 RNAi is a natural process that blocks or interferes with this activity in animals and plants. In the late 1990s, scientists discovered how to use this mechanism to control the flow of genetic information. EFSA has organised this international workshop as a proactive step to assess whether the technique will affect its present risk assessment approach. Elisabeth Waigmann, Head of EFSA’s GMO Unit, explained: “It is possible that the RNAi technique could lead to unintended effects on the GM plant itself or on other species. By sharing our knowledge on RNAi, we want to explore how to predict if such effects are likely to occur and what they might be.

EFSA will be joined by scientists and experts on risk assessment from academia, risk assessment bodies and the private sector from the Americas, Asia and all over Europe. EFSA 24/06/15 EFSA clarifies data requirements for GM plant risk assessment. Nouvelle 24 juin 2015 New EFSA guidance clarifies the data needs for the agronomic and phenotypic characterisation of genetically modified (GM) plants. 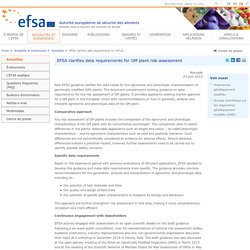 The document complements existing guidance on data requirements for the risk assessment of GM plants. It provides applicants seeking market approval for a GM plant in the European Union with recommendations on how to generate, analyse and interpret agronomic and phenotypic data of the GM plant. Comparative approach Any risk assessment of GM plants includes the comparison of the agronomic and phenotypic characteristics of the GM plant with its conventional counterpart. Specific data requirements Based on the experience gained with previous evaluations of GM plant applications, EFSA decided to develop this guidance and make data requirements more specific. The selection of test materials and sites the quality and design of field trials the selection of specific plant characteristics to measure its biology and behaviour.

EFSA 31/10/11 Présentation : EU GMO Environmental Risk Assessment. EFSA 07/12/11 EFSA publishes general guidance on conducting 90-day oral toxicity study in rodents on whole food and feedEFSA has. News Story 7 December 2011 The European Food Safety Authority (EFSA) has published its first general guidance for carrying out 90-day feeding studies on whole food and feed in rodents. It will support applicants in carrying out feeding trials related to applications for novel foods and food and feed derived from genetically modified organisms. The guidance, developed by the EFSA’s Scientific Committee, outlines a randomised block test design to maximise the power of the experiment while avoiding unnecessary use of test animals.

EFSA is pro-actively working to keep at the forefront of risk assessment methodologies and approaches to GMOs and is working with Member States to draw on the best scientific minds in Europe on these issues. Scientists from the European food safety watchdog, including a number from its GMO Panel, and the national experts nominated by the national food safety agencies met in November 2007 to examine EFSA’s risk assessment procedures and its Guidance Documents. EFSA subjects each individual GMO application to rigorous review carried out according to internationally agreed guidelines. EFSA 10/09/10 Defining Environmental Risk Assessment Criteria for Genetically Modified Insects to be placed on the EU Market. EFSA 10/08/11 Document d’orientation actualisé sur la surveillance environnementale consécutive à la commercialisation des plant.