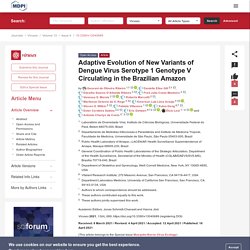 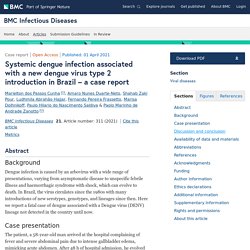 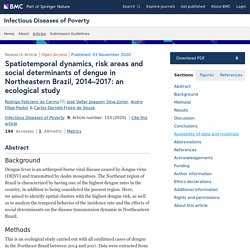 BMC PUBLIC HEALTH 12/06/20 Retrospective cross-sectional observational study on the epidemiological profile of dengue cases in Pernambuco state, Brazil, between 2015 and 2017. The incidence and clinical manifestations of dengue are strongly influenced by viral, environmental and host factors. 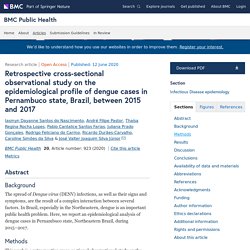 With regard to host, in addition to the elements closely related to immunity and genetic background, socio-demographic characteristics have also been associated with the number and severity of DENV infections [11, 17, 23, 46,47,48]. In this perspective, we report the epidemiological profile of dengue cases in Pernambuco state, Brazil, in the 2015–2017 triennium. Among the various social factors, age is one of the characteristics most related to DENV infections [9, 11, 14, 49,50,51]. 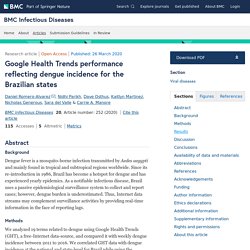 Here, we evaluate the usefulness of GHT in tracking dengue incidence both at the country and the state level in Brazil, by evaluating GHT correlation with weekly dengue incidence data over 6 years. We have shown that the performance of GHT varies across states (Fig. 3, Table 2, and additional file 3); however, it is highly correlated with dengue incidence (adjusted R squared > 0.8) in 12 Brazilian states that are geographically dispersed.

Moreover, we showed that proxies of Internet penetration such as the number of Internet users in the last 3 months only partially explain the usefulness of GHT (Fig. 4). In fact, the logarithm of the total population, from among 474 potential demographic predictors, allowed us to build a model that quantified GHT usefulness with similar accuracy to that of Internet penetration data (Fig. 5). Int. J. Environ. Res. Public Health 20/03/20 Dengue Surveillance System in Brazil: A Qualitative Study in the Federal District. 2. 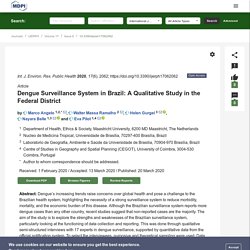 Materials and Methods Qualitative data deriving from interviews with 17 experts (see Table 1) have been collected. These were supplemented by locally published guidelines and bulletins. To identify the role of the interviewees, ID codes are used and listed in Table 1. PLOS 12/03/20 First report of Aedes albopictus infected by Dengue and Zika virus in a rural outbreak in Brazil.

Abstract In Brazil, Dengue (DENV) and Zika (ZIKV) viruses are reported as being transmitted exclusively by Aedes aegypti in urban settings. 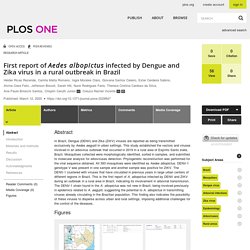 This study established the vectors and viruses involved in an arbovirus outbreak that occurred in 2019 in a rural area of Espírito Santo state, Brazil. Mosquitoes collected were morphologically identified, sorted in samples, and submitted to molecular analysis for arboviruses detection. Phylogenetic reconstruction was performed for the viral sequence obtained. All 393 mosquitoes were identified as Aedes albopictus. PLOS 03/02/20 Interdependence between confirmed and discarded cases of dengue, chikungunya and Zika viruses in Brazil: A multivariate time-series analysis. Abstract The co-circulation of different arboviruses in the same time and space poses a significant threat to public health given their rapid geographic dispersion and serious health, social, and economic impact. 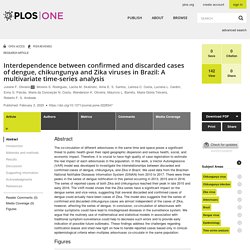 Therefore, it is crucial to have high quality of case registration to estimate the real impact of each arboviruses in the population. In this work, a Vector Autoregressive (VAR) model was developed to investigate the interrelationships between discarded and confirmed cases of dengue, chikungunya, and Zika in Brazil. We used data from the Brazilian National Notifiable Diseases Information System (SINAN) from 2010 to 2017. SCIENTIFIC REPORTS 04/02/20 Association of past dengue fever epidemics with the risk of Zika microcephaly at the population level in Brazil. This is the first article, to the best of our knowledge, in which an association, at the ecological level, between previous dengue fever epidemics and the Zika-related microcephaly epidemic was described. 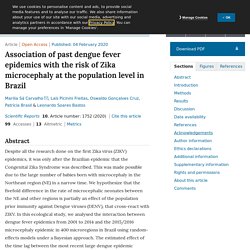 It should be noted that the notification system for Zika was only implemented in February 2016, when the Zika epidemic was decreasing in the NE region. Therefore, we could not control for Zika incidence in the models. It is possible that the differences in microcephaly rates were a consequence of different ZIKV attack rates across the regions, as suggested in a recent paper37. BMC Infectious Diseases 20/05/19 Seroprevalence for dengue virus in a hyperendemic area and associated socioeconomic and demographic factors using a cross-sectional design and a geostatistical approach, state of São Paulo, Brazil. The high seroprevalence that we founded in our study reveals a large burden of disease of DENV in São José do Rio Preto. 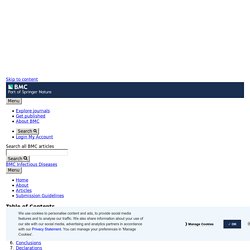 The seroprevalence found in people aged 10–19 years, slightly lower than the seroprevalences for the other age groups, also reveals high rates of transmission in the recent past. These results can be seen as a consequence of events of the last five and four decades, respectively, in Brazil and the state of São Paulo. The process of reinfestation of the country by Ae. aegypti, after its eradication, began in the 1970s [47] and currently the vector is present in all its States. Dengue et changement climatique au Brésil. PLOS 22/04/19 Spatio-temporal dynamics of dengue in Brazil: Seasonal travelling waves and determinants of regional synchrony. Abstract Dengue continues to be the most important vector-borne viral disease globally and in Brazil, where more than 1.4 million cases and over 500 deaths were reported in 2016.

BMC PUBLIC HEALTH 21/03/19 30 years of fatal dengue cases in Brazil: a review. BMC 27/07/18 30 years of dengue fatal cases in Brazil: a laboratorial-based investigation of 1047 cases. NATURE 19/07/18 Quantifying the spatial spread of dengue in a non-endemic Brazilian metropolis via transmission chain reconstruction. PLOS 13/03/18 Dengue virus in Aedes aegypti and Aedes albopictus in urban areas in the state of Rio Grande do Norte, Brazil: Importance of virological and entomological surveillance. Abstract Background Vector control remains the sole effective method to prevent dengue virus (DENV) transmission, although a vaccine for dengue has recently become available and testing of its efficacy and coverage is being performed in multiple places. Entomological surveillance is a key factor in alerting authorities to possible outbreaks, but until now natural DENV infection of mosquito populations has been scarcely used as an early warning system to monitor fluctuating prevalence of infected mosquitoes.

The purpose of this study was to determine the burden of adult and larval/pupae of Aedes aegypti and Aedes albopictus with DENV in urban areas in the state of Rio Grande do Norte, Brazil. Methodology/Principal findings Immature insect forms (larvae and pupae) were collected from April 2011 to March 2012, whereas the collection of adults was conducted along 3 years: May 2011 to April 2014. Conclusions/Significance. Epidemiol. Serv. Saude, Brasília, 26(3), Jul-Sep 2017 Identification of surveillance and control priority areas for dengue and other arboviruses transmitted by Aedes aegypti in Natal-RN, Brazil: experience report. PLOS 17/11/17 The introduction of dengue follows transportation infrastructure changes in the state of Acre, Brazil: A network-based analysis. Abstract Human mobility, presence and passive transportation of Aedes aegypti mosquito, and environmental characteristics are a group of factors which contribute to the success of dengue spread and establishment.

Abstract Dengue is a major public health problem in tropical and subtropical areas worldwide. There is a lack of information on the risk factors for death due to severe dengue fever in developing countries, including Brazil where the state of Amazonas is located. This knowledge is important for decision making and the implementation of effective measures for patient care. This study aimed to identify factors associated with death among patients with severe dengue, in Amazonas from 2001 to 2013. We conducted a retrospective cohort study based on secondary data from the epidemiological surveillance of dengue provided by the Fundação de Vigilância em Saúde do Amazonas, FVS (Health Surveillance Foundation) of the Secretaria de Saúde do Amazonas, SUSAM (Health Secretariat of the State of Amazonas).