MICROORGANISMS 02/09/21 Cyclosporiasis—Updates on Clinical Presentation, Pathology, Clinical Diagnosis, and Treatment. All articles published by MDPI are made immediately available worldwide under an open access license. 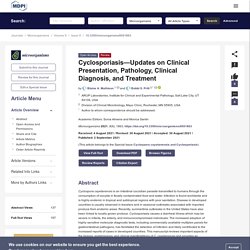 No special permission is required to reuse all or part of the article published by MDPI, including figures and tables. For articles published under an open access Creative Common CC BY license, any part of the article may be reused without permission provided that the original article is clearly cited. Feature Papers represent the most advanced research with significant potential for high impact in the field. Feature Papers are submitted upon individual invitation or recommendation by the scientific editors and undergo peer review prior to publication. The Feature Paper can be either an original research article, a substantial novel research study that often involves several techniques or approaches, or a comprehensive review paper with concise and precise updates on the latest progress in the field that systematically reviews the most exciting advances in scientific literature. FDA_GOV 01/07/21 Cyclospora Prevention, Response and Research Action Plan. 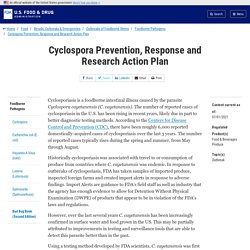 The number of reported cases of cyclosporiasis in the U.S. has been rising in recent years, likely due in part to better diagnostic testing methods. According to the Centers for Disease Control and Prevention (CDC), there have been roughly 6,000 reported domestically-acquired cases of cyclosporiasis over the last 3 years. The number of reported cases typically rises during the spring and summer, from May through August. Historically cyclosporiasis was associated with travel to or consumption of produce from countries where C. cayetanensis was endemic. In response to outbreaks of cyclosporiasis, FDA has taken samples of imported produce, inspected foreign farms and created import alerts in response to adverse findings. 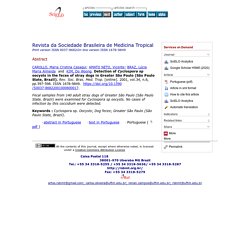 CLINICAL TRANSPLANTATION 30/05/19 Intestinal parasites including Cryptosporidium, Cyclospora, Giardia, and Microsporidia, Entamoeba histolytica, Strongyloides, Schistosomiasis, and Echinococcus: Guidelines from the American Society of Transplantation Infe. These updated guidelines from the Infectious Diseases Community of Practice of the American Society of Transplantation review the diagnosis, prevention, and management of intestinal parasites in the pre‐ and post‐transplant period. 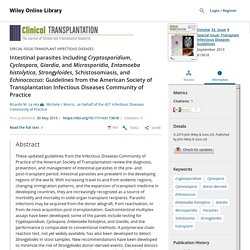 Intestinal parasites are prevalent in the developing regions of the world. Food Research International Volume 125, November 2019, A novel multiplex real-time PCR for the detection of Echinococcus multilocularis, Toxoplasma gondii, and Cyclospora cayetanensis on berries. 1. 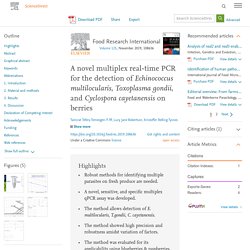 Introduction Food safety is a major concern for the global community, with an estimated 600 million cases of foodborne illnesses occurring annually (FAO/WHO, 2019). Food Microbiology Volume 76, December 2018, Evaluation of the U.S. Food and Drug Administration validated method for detection of Cyclospora cayetanensis in high-risk fresh produce matrices and a method modification for a prepared dish. 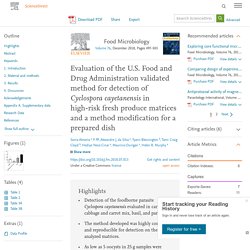 Introduction Cyclospora cayetanensis is an intestinal protozoan parasite that causes a diarrheal illness in humans called cyclosporiasis. Symptoms of cyclosporiasis include explosive watery diarrhea, nausea, fatigue, increased gas, weight loss, bloating, and loss of appetite, with symptoms typically beginning an average of 7 days after infection (Herwaldt, 2000). Humans become infected with C. cayetanensis after consuming food or water contaminated with the parasite's sporulated oocysts. Infected humans shed non-sporulated oocysts, which require 7–15 days under ideal conditions (23–27 °C) in the environment, to sporulate and become infective (Ortega and Sanchez, 2010). Cyclosporiasis is an emerging infectious disease in developing and developed countries such as the U.S. and Canada (Dixon, 2016). 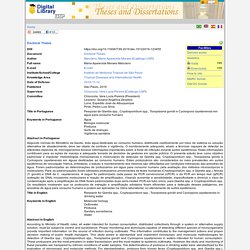 CIDRAP 26/07/19 Multistate outbreak tied to basil part of Cyclospora surge. Federal health officials are investigating a Cyclospora outbreak linked to fresh basil that has so far sickened 132 people in 11 states, part of a steep increase at the national level. 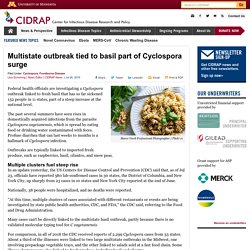 Food Microbiology Volume 87, May 2020, Evaluation of the U.S. Food and Drug Administration validated molecular method for detection of Cyclospora cayetanensis oocysts on fresh and frozen berries. 1. 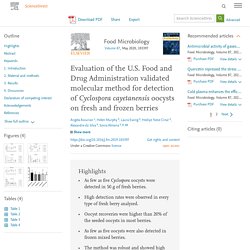 Introduction Cyclospora cayetanensis is a human protozoan parasite that is considered an emerging foodborne pathogen (Dixon, 2016). According to the Food and Agriculture Organization and the World Health Organization (FAO/WHO), C. cayetanensis is one of the top 15 most important parasites transmitted via food, particularly by fresh produce (FAO/WHO, 2014). In 2018, there was a total of 2299 laboratory-confirmed domestically acquired cases from 33 states in the U.S. and 160 of the affected people needed hospitalization (Casillas et al., 2018; CDC, 2018). Foodborne infection through consumption of contaminated fresh produce is one of the main routes of transmission of C. cayetanensis (Butler et al., 2015; Mead et al., 1999; Scallan et al., 2011). Table 1 summarizes C. cayetanensis outbreaks linked, or suspected to be linked, to berries worldwide.

Table 1. In bold: Outbreaks that occurred in two countries at the same time. 2. 2.1. 2.2. 2.3. 2.4. FRONT. MICROBIOL. 27/08/19 A New Protocol for Molecular Detection of Cyclospora cayetanensis as Contaminants of Berry Fruits. Introduction Cyclospora cayetanensis is a coccidian parasite that has been associated with extensive foodborne outbreaks of gastrointestinal disease. 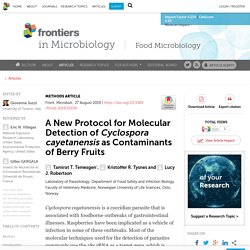 Sociedad Estudiantil de Ciencias Clínicas UPCH via YOUTUBE 28/08/18 Cyclospora cayetanensis. CDC MMWR - avril 2019 - Cyclosporiasis Surveillance — United States, 2011–2015. Altmetric: Abstract Problem/Condition: Cyclosporiasis is an intestinal illness caused by the parasite Cyclospora cayetanensis, which is transmissible by ingestion of fecally contaminated food or water. Cyclosporiasis is most common in tropical and subtropical regions of the world. CIDRAP 26/04/19 Annual snapshot of foodborne illnesses shows Cyclospora spike. In its annual report summing up the latest trends with pathogens that are common sources of foodborne illness, the Centers for Disease Control and Prevention (CDC) said today that the incidence of most illnesses increased in 2018, especially Cyclospora infections. A team from the CDC and partners in 10 states that are part of the FoodNet surveillance network looked at levels for 2018 and compared them with levels for 2015 through 2017.

“We went out for a meal on our first night and had a really nice time,” Chris Gillian told UK television station ITV, according to The Sun. “But almost a week in, I’d woken up feeling funny.” Gillian’s queasiness worsened as the day went on, until he nearly passed out as he and his wife, Marisa, were lounging poolside at the resort. “I started to get really bad headaches and feel really dizzy, so we went back to the hotel room,” he said. “I remember laying on the bed and I just had this sudden urge that I was going to throw up. “I barely made it to the sink and just threw up what I can only describe as just blood.” FRESH FRUIT PORTAL 13/09/18 U.S.: More than 500 affected in cyclospora outbreak linked to McDonald’s. FOOD POISONING BULLETIN 22/06/18 Cyclospora Kwik Trip Outbreak Linked to Del Monte Vegetable Trays Grows to 144 Sick.

Cyclosporiasis in travellers returning to the United Kingdom from Mexico in summer 2017: lessons from the recent past to inform the future. Euro Surveill. 2017;22(32):pii=30592. FOOD SAFETY NEWS 08/08/17 CDC advisory: Cyclospora cases more than double this year. Federal health officials are asking health care providers across the country to be on the lookout for foodborne infections from the Cyclospora parasite because more than double the number of cases have already been confirmed this year and the peak season is not yet ended. Food and Waterborne Parasitology Volume 2, March 2016 Food and Waterborne Parasitology - Optimization and validation of methods for isolation and real-time PCR identification of protozoan oocysts on leafy green vegetables and berry fruits. Bonaidea by PreveriskGroup VIA YOUTUBE 21/10/16 WEBINAR III "Cómo evitar reclamaciones ...+ Prevención por Cyclospora"

FOOD SAFETY NEWS 30/09/16 Cyclospora cases drop after FDA monitors Mexican cilantro. The U.S. Food and Drug Administration is linking its program to more closely monitor fresh Mexican cilantro to a drop in domestically acquired Cyclospora cayetanensis infections. According to a Sept. 19 update from the U.S. Centers for Disease Control and Prevention, as of Sept. 16 there were at least 134 confirmed cases of cyclosporiasis with illness onset on or after May 1, compared with 319 for the same period last year. There are 384 total cases reported so far in 2016. BMC Infect Dis. 2015; 16: 66. Marked seasonality of Cyclospora cayetanensis infections: ten-year observation of hospital cases, Honduras. Korean J Parasitol. 2016 Oct; 54(5): 631–636. Multiplex-Touchdown PCR to Simultaneously Detect Cryptosporidium parvum, Giardia lamblia, and Cyclospora cayetanensis, the Major Causes of Traveler’s Diarrhea. CBC NEWS 11/08/16 Cyclospora outbreak in Canada possibly linked to imported produce.

The federal government is advising Canadians to check where their produce comes from after an outbreak of cyclospora was reported in four provinces. The Public Health Agency of Canada said 51 cases of the intestinal illness cyclosporiasis were recorded in Quebec, Ontario, Alberta and British Columbia between May and July this year. Warming climate linked to increase in food poisoning from oysters The Canadian Food Inspection Agency said it is still looking into a food source linked to the outbreak. AFRICAN JOURNAL OF MICROBIOLOGY RESEARCH 21/05/13 Cyclosporiasis and other intestinal parasitoses in association with diarrhoea in Ilorin, Nigeria. ANSES - JANV 2014 - Caractéristiques et sources de Cyclospora cayetanensis - Principales caractéristiques microbiologiques. UNIVERSITY OF HAWAII - SEPT 2013 - Cyclospora cayetanensis and Cyclosporiasis. Water Res. 2017 Jan 25;114:14-22. Waterborne transmission of protozoan parasites: Review of worldwide outbreaks - An update 2011-2016.