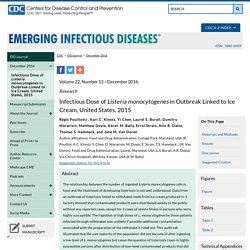 Journal of microbiology and virology - 2015 - Detection of Listeria monocytogenes in Milk and Ice Cream by Polymerase Chain Reaction. FOOD SAFETY MAGAZINE 24/04/15 Listeria in Ice Cream: Expert Analysis. News | April 24, 2015 By Food Safety Magazine On April 20, 2015, Blue Bell Creameries voluntarily recalled all of its products currently on the market made at all of its facilities, including ice cream, frozen yogurt, sherbet, and frozen snacks, because they have the potential to be contaminated with Listeria monocytogenes. 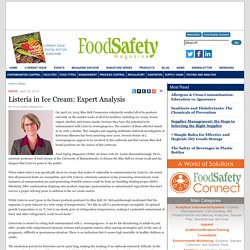 The number of those affected stands at 10, with 3 deaths. This complex and ongoing multistate outbreak investigation of listeriosis illnesses has been occurring since 2010. Several strains of L. monocytogenes appear to be involved in this outbreak and that various Blue Bell brand products are the source of this outbreak. Food Safety Magazine (FSM) sat down with Dr. When asked what it was specifically about ice cream that makes it vulnerable to contamination by Listeria, she noted that all processed foods are susceptible, and with Listeria extremely common in the processing environment, most instances of contamination are post-processing. While U.S. CDC 10/06/15 Multistate Outbreak of Listeriosis Linked to Blue Bell Creameries Products (Final Update) Introduction This was a complex multistate outbreak investigation of listeriosis cases occurring over several years. 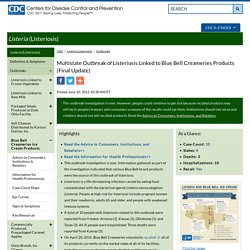 Introduction In March 2015, a listeriosis outbreak (outbreak I) was reported from a hospital (hospital X) involving five highly susceptible elderly patients who were hospitalized for other medical conditions prior to exposure to Listeria monocytogenes (Centers for Disease Control and Prevention, 2015). 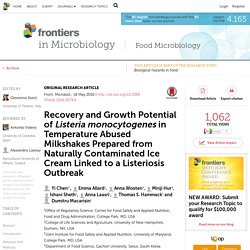 DNA fingerprinting [pulsed field gel electrophoresis (PFGE) and whole genome sequencing (WGS)] of L. monocytogenes isolates from these patients and various ice cream products linked four patients to the consumption of three flavors of milkshakes (vanilla, chocolate, and strawberry) served at lunch or dinner in hospital X and prepared with the contaminated ice cream scoops that were produced in production line A (Centers for Disease Control and Prevention, 2015; Karl Klontz, personal communication). It is expected that very little post-contamination growth occurred in ice cream because this product is kept frozen all along the production and distribution chain. Materials and Methods.