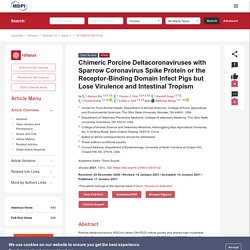 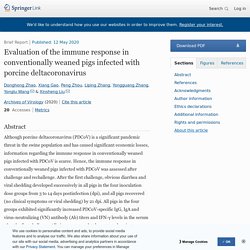 Hence, the immune response in conventionally weaned pigs infected with PDCoV was assessed after challenge and rechallenge. After the first challenge, obvious diarrhea and viral shedding developed successively in all pigs in the four inoculation dose groups from 3 to 14 days postinfection (dpi), and all pigs recovered (no clinical symptoms or viral shedding) by 21 dpi. 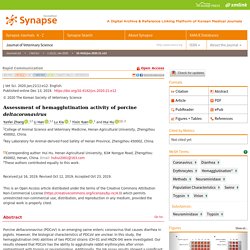 The clinical symptoms of PDCoV are similar to those of porcine epidemic diarrhea virus (PEDV) and transmissible gastroenteritis virus (TGEV), but the mortality rates are lower in PDCoV-affected nursing pigs [2]. PDCoV was first identified in pigs in Hong Kong in 2012, while the first PDCoV outbreak in swine herds was reported in the United States in 2014 [3].

Subsequently, PDCoV was detected in Canada, South Korea, mainland China, Thailand, Laos, and Vietnam, indicating that it is widespread among the world's pig populations; moreover, PDCoV can have devastating effects on the swine industry [4]. However, no treatments or vaccines are available for PDCoV. Hemagglutinin, an envelope glycoprotein of some enveloped viruses, can adsorb to erythrocytes. NATIONAL HOG FARMER 15/01/20 Researchers find PDCoV can easily transmit to healthy poultry. Researchers from The Ohio State University have determined that porcine deltacoronavirusus has the potential to jump to other species, specifically healthy chickens and turkeys. 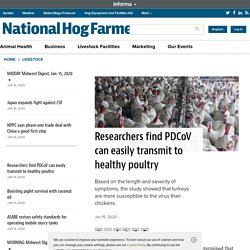 The researchers who led this work were part of a team that previously found in a lab setting that the virus could infect cells from multiple species, including chickens and humans. In this study, birds that were given the virus developed diarrhea by two days after infection. Healthy birds housed with infected chickens and turkeys also developed diarrhea two days after exposure. That rapid spread of disease surprised the Ohio State University scientists. "We weren't even sure the virus would transmit from bird to bird.

Susceptibility to a pig virus can't ethically be tested in humans – but the previous work in cells showed the virus attaches itself to the same type of receptor in many different host species. CDC EID - FEV 2020 - Porcine Deltacoronavirus Infection and Transmission in Poultry, United States.

PIG333 11/12/19 Pirbright study uncovers replication sites of emerging pig disease. A recent study carried out at The Pirbright Institute has uncovered the sites within the cell where porcine deltacoronavirus (PDCoV) makes new copies of itself during replication. 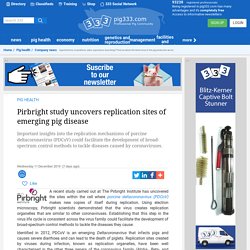 Using electron microscopy, Pirbright scientists demonstrated that the virus creates replication organelles that are similar to other coronaviruses. Establishing that this step in the virus life cycle is consistent across the virus family could facilitate the development of broad-spectrum control methods to tackle the diseases they cause. Identified in 2012, PDCoV is an emerging Deltacoronavirus that infects pigs and causes severe diarrhoea and can lead to the death of piglets. Replication sites created by viruses during infection, known as replication organelles, have been well characterised in the other three genera of the coronavirus family (Alpha-, Beta-, and Gammacoronavirus). MRCVS_CO_UK 12/12/19 Study reveals replication sites of emerging pig disease - porcine deltacoronavirus (PDCoV) Research could be used in the development of vaccines. 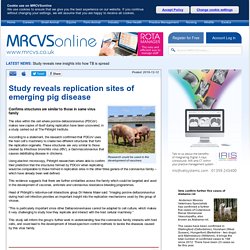 Confirms structures are similar to those in same virus family The sites within the cell where porcine deltacoronavirus (PDCoV) makes new copies of itself during replication have been uncovered, in a study carried out at The Pirbright Institute. According to a statement, the research confirmed that PDCoV uses the host cell’s machinery to create two different structures that form the replication organelle. These structures are very similar to those created by infectious bronchitis virus (IBV), a Gammacoronavirus that causes debilitating disease in chickens. Using electron microscopy, Pirbright researchers where able to confirm their prediction that the structures formed by PDCoV when replicating would be comparable to those formed in replication sites in the other three genera of the coronavirus family – which have already been well defined. 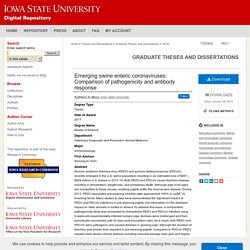 Both PEDV and PDCoV cause diarrheic disease resulting in dehydration, weight loss, and sometimes death. Although pigs of all ages are susceptible to these viruses, suckling piglets suffer the most severe disease. During 2013, PEDV associated pre-weaning morality rates approached 100% in naÃÂ¯ve breeding farms. Many studies to date have demonstrated the significant impact of PEDV and PDCoV infections in pre-weaning piglets, but information on the diseases impact on older animals is limited or absent. Recommended Citation. Current Opinion in Virology Volume 34, February 2019, Emerging and re-emerging coronaviruses in pigs. E.N. 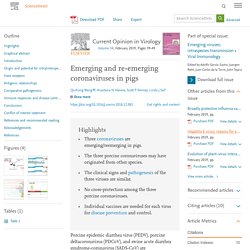 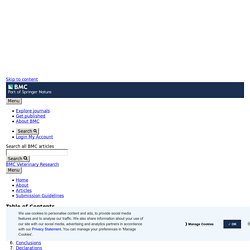 To fill the gap of interaction between virus and host, particularly the correlation analysis between clinical symptoms and differential expressed host genes, 5-day-old piglets were orally challenged with PDCoV strain, CHN-GD16–05, and used for mRNA expression profile analysis in this study. Clinical symptoms, diarrhea, vomiting and mental depression, of pigs were observed as early as the third day after the PDCoV challenge. 3/20 pigs died and the others began to recovery after 11 days.

The intestine of diarrhea pig after dissection was found to be filled with water and its wall became almost paper-thin. The highest PDCoV load determined by qPCR was located in the ileum, followed by jejunum, duodenum and mesenteric lymph nodes, which differs from PEDV that concentrates in posterior jejunum [16].

But the mechanism of it needs further study. BMC Veterinary Research 11/04/19 Analysis of long non-coding RNAs in neonatal piglets at different stages of porcine deltacoronavirus infection. PDCoV infects pigs of all ages, but primarily causes diarrhea in newborn pigs. 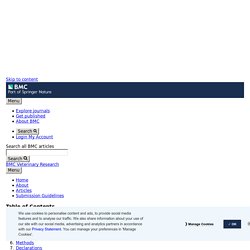 Clinically, PDCoV infection is similar to porcine intestinal coronavirus, but PDCoV infection has a wider tissue tropism and can be detected in organs other than the digestive tract. This suggests a complex pathogenic mechanism for this virus and an in-depth understanding of its pathogenic and immune mechanisms is necessary for infection control. Current lncRNA research has focused on human medicine including cardiovascular disease and cancer [17–19]. In livestock and poultry, examination of lncRNAs is in its infancy and existing research has focused on muscle, bone and embryonic development as well as fat metabolism [20–22].

Additionally, these studies have focused on lncRNA regulation of protein-coding genes. Recent studies have shown that viral infections can induce lncRNAs to promote or inhibit viral responses. FRONT. VET. SCI. 28/01/19 PEDV and PDCoV pathogenesis: the interplay between host innate immune responses and porcine enteric coronaviruses. 1National Center for Genetic Engineering and Biotechnology (BIOTEC), Thailand Enteropathogenic porcine epidemic diarrhea virus (PEDV) and porcine deltacoronavirus (PDCoV), members of the coronavirus family, account for the majority of lethal watery diarrhea in neonatal pigs in the past decade. These two viruses pose significant economic and public health burdens, even as both continue to emerge and reemerge worldwide. The ability to evade, circumvent or subvert the host’s first line of defense, namely the innate immune system, is the key determinant for pathogen virulence, survival, and the establishment of successful infection.

Unfortunately, we have only started to unravel the underlying viral mechanisms used to manipulate host innate immune responses. NATURE 07/09/17 Virulence of current German PEDV strains in suckling pigs and investigation of protective effects of maternally derived antibodies. Clinical and pathological observations Clinical signs upon inoculation of sows Two sows, which were inoculated with a cell culture-adapted PEDV strain (PEDV EU, group A1) showed slight depression over a period of four days, accompanied by reduced feed intake. In contrast, the two sows of group B1 (inoculated with German field PEDV, DE) showed diarrhea and vomiting upon inoculation. Moreover, both sows were anorectic for one day.

Thereafter, one of the sows (ear tag 6150) was still showing slight depression over four days whereas the other was free of clinical signs again. All four sows of groups A2 and B2, which stayed naïve prior to farrowing, remained healthy during the pre-farrowing time.

OSU_EDU 14/05/18 New pig virus found to be a potential threat to humans. UMN_EDU - MAI 2018 - Thèse en ligne : Management And Feeding Strategies To Reduce The Impact Of Porcine Delta Coronavirus In Nursery Pigs. NEWSWEEK 15/05/18 PORCINE DELTACORONAVIRUS: DEADLY PIG VIRUS COULD JUMP TO HUMANS, SCIENTISTS WARN. Scientists fear that a recently identified pig virus could infect people, after it was found to hijack human cells in lab tests. Porcine deltacoronavirus (PDCoV) was first identified in 2012 in pigs in China, but was not linked to a disease at that time. By 2014, was detected for the first time in the U.S. during a pig diarrhea outbreak in Ohio, and has since been reported in several other countries. The disease can cause acute diarrhea and vomiting in young pigs, and can be fatal. It has not infected other animals but experts are particularly concerned by its similarity to the viruses which caused the SARS and MERS outbreaks. According to the World Health Organization, the SARS outbreak of 2002 and 2003—which started in China and killed 774 people—while the ongoing MERS outbreak in Saudi Arabia has claimed more than 700 lives.

Dr. A piglet is seen at a pig farm on the outskirts of Beijing, on June 5, 2017. Dr. "A receptor is like a lock in the door. However, Dr. Dr. Dr. Dr. Emerging Microbes & Infections 11/04/18 Contribution of porcine aminopeptidase N to porcine deltacoronavirus infection. UNIVERSITY OF MAINE - MAY 2014 - Questions and Answers: Swine Enteric Coronavirus Diseases Monitoring and Control Program. USDA APHIS Veterinary Services, May 2014 In response to the significant impact swine enteric coronavirus diseases (SECD), including Porcine Epidemic Diarrhea (PEDv) and Porcine deltacoronavirus (PDCoV), are having on the U.S. pork industry, USDA issued a Federal Order on June 5, 2014. USDA also announced $26.2 million in funding to combat these diseases.

USDA, States, herd veterinarians, and producers will collaborate to manage the diseases in a manner that supports business continuity for commercial pork producers and maintains a plentiful supply of pork for consumers. There are two basic requirements of the Federal Order. First, producers, veterinarians, and diagnostic laboratories are now required to report all cases of new SECD, including PEDv and PDCoV, to USDA or State animal health officials. Reporting Q. A. Q. A. UMN_EDU 15/06/18 Herd level prevalence and incidence of porcine epidemic diarrhea virus (PEDV) and porcine deltacoronavirus(PDCoV) in swine herds in Ontario, Canada.

We have learned some hard lessons as an industry. Do not let time fade our memories and become complacent. Dr. Bob Morrison’s Swine Health Monitoring Project Industry has made great progressCourtesy of the University of Minnesota and Dr. However, after a year of experience and aggressive research, we have realized tremendous success to reduce the annual break rate below 10% for the last three years. As you reexamine the biosecurity changes that were made immediately after PEDV versus prior to PEDV, many of those were not very significant. . • Ingredient sourcing — Stay away from porcine ingredient inclusion in high risk sites like sow herds. PLOS 24/05/17 Environmental persistence of porcine coronaviruses in feed and feed ingredients.

NATIONAL HOG FARMER 02/11/15 Feed additives show varied results in reducing porcine delta coronavirus survival. There are currently three known coronaviruses that can affect the gastrointestinal health of pigs – transmissible gastroenteritis virus, porcine epidemic diarrhea virus and porcine delta coronavirus. Although clinical signs produced by PDCoV are less severe than those caused by PEDV, both viruses are often found together in co-infections, are excreted in feces and can be transmitted via feed contaminated with swine feces. Inclusion of certain additives in swine feed has been shown to provide growth performance benefits, may be used as alternatives to antibiotics and may control pathogens such as Salmonella. The goal of this study was to determine if feed additives, at recommended or twice the recommended concentrations, are effective in reducing the survival time of PDCoV in feed. A commercially available phase 2 nursery diet was obtained from Vita Plus of Madison, Wis.