NATURE 30/10/13 Isolation and characterization of a bat SARS-like coronavirus that uses the ACE2 receptor. Sampling Bats were trapped in their natural habitat as described previously5. 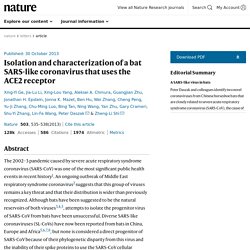 Throat and faecal swab samples were collected in viral transport medium (VTM) composed of Hank’s balanced salt solution, pH 7.4, containing BSA (1%), amphotericin (15 μg ml−1), penicillin G (100 U ml−1) and streptomycin (50 μg ml−1). To collect fresh faecal samples, clean plastic sheets measuring 2.0 by 2.0 m were placed under known bat roosting sites at about 18:00 h each evening. Relatively fresh faecal samples were collected from sheets at approximately 05:30–06:00 the next morning and placed in VTM. Samples were transported to the laboratory and stored at −80 °C until use. RNA extraction, PCR and sequencing RNA was extracted from 140 μl of swab or faecal samples with a Viral RNA Mini Kit (Qiagen) following the manufacturer’s instructions. NATURE 09/11/15 A SARS-like cluster of circulating bat coronaviruses shows potential for human emergence. The emergence of SARS-CoV heralded a new era in the cross-species transmission of severe respiratory illness with globalization leading to rapid spread around the world and massive economic impact3,4. 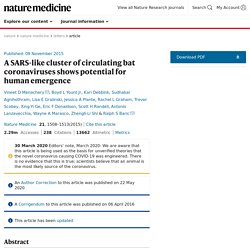 Since then, several strains—including influenza A strains H5N1, H1N1 and H7N9 and MERS-CoV—have emerged from animal populations, causing considerable disease, mortality and economic hardship for the afflicted regions5. Although public health measures were able to stop the SARS-CoV outbreak4, recent metagenomics studies have identified sequences of closely related SARS-like viruses circulating in Chinese bat populations that may pose a future threat1,6. However, sequence data alone provides minimal insights to identify and prepare for future prepandemic viruses. (a) The full-length genome sequences of representative CoVs were aligned and phylogenetically mapped as described in the Online Methods.

UNIVERSITY OF NORTH CAROLINA 09/11/15 New SARS-like virus can jump directly from bats to humans, no treatment available. Researchers from the University of North Carolina at Chapel Hill have discovered a new bat SARS-like virus that can jump directly from its bat hosts to humans without mutation. However, researchers point out that if the SARS-like virus did jump, it is still unclear whether it could spread from human to human. The discovery, reported in the Nov. 9 issue of Nature Medicine, is notable not only because there is no treatment for this newly discovered virus, but also because it highlights an ongoing debate over the government's decision to suspend all gain of function experiments on a variety of select agents earlier this year.

The move has put a substantial standstill on the development of vaccines or treatments for these pathogens should there be an outbreak. SCIENCEMEDIACENTRE_CO_NZ 31/10/13 SARS may have originated in bats – experts respond. Two novel coronaviruses that are closely related to SARS have been found in Chinese horseshoe bats. 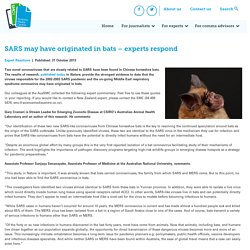 The results of research, published today in Nature, provide the strongest evidence to date that the viruses responsible for the 2002-2003 SARS pandemic and the on-going Middle East respiratory syndrome coronavirus may have originated in bats. Our colleagues at the AusSMC collected the following expert commentary. Feel free to use these quotes in your reporting. If you would like to contact a New Zealand expert, please contact the SMC (04 499 5476; smc@sciencemediacentre.co.nz). Gary Crameri is Stream Leader for Emerging Zoonotic Disease at CSIRO’s Australian Animal Health Laboratory and an author of this research. 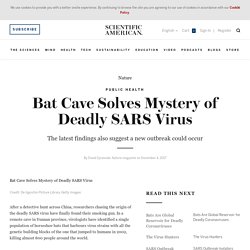 In a remote cave in Yunnan province, virologists have identified a single population of horseshoe bats that harbours virus strains with all the genetic building blocks of the one that jumped to humans in 2002, killing almost 800 people around the world. The killer strain could easily have arisen from such a bat population, the researchers report in PLoS Pathogens on November 30. They warn that the ingredients are in place for a similar disease to emerge again. In late 2002, cases of a mystery pneumonia-like illness began occurring in Guangdong province, southeastern China. The disease, dubbed severe acute respiratory syndrome (SARS), triggered a global emergency as it spread around the world in 2003, infecting thousands of people. 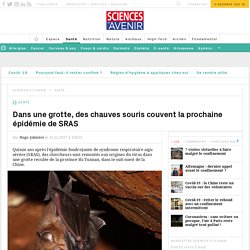 Trends in Microbiology, August 2015, Vol. 23, No. Bat-to-human: spike features determining ‘host jump’ of coronaviruses SARS-CoV, MERS-CoV, and beyond. NATURE 12/11/15 Engineered bat virus stirs debate over risky research - Lab-made coronavirus related to SARS can infect human cells. An experiment that created a hybrid version of a bat coronavirus — one related to the virus that causes SARS (severe acute respiratory syndrome) — has triggered renewed debate over whether engineering lab variants of viruses with possible pandemic potential is worth the risks. 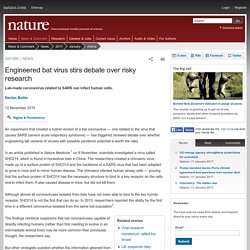 In an article published in Nature Medicine1 on 9 November, scientists investigated a virus called SHC014, which is found in horseshoe bats in China. The researchers created a chimaeric virus, made up of a surface protein of SHC014 and the backbone of a SARS virus that had been adapted to grow in mice and to mimic human disease. The chimaera infected human airway cells — proving that the surface protein of SHC014 has the necessary structure to bind to a key receptor on the cells and to infect them.

It also caused disease in mice, but did not kill them. Although almost all coronaviruses isolated from bats have not been able to bind to the key human receptor, SHC014 is not the first that can do so. CSIRO 01/03/15 Bats confirmed host of SARS virus. PNAS 03/07/07 A previously unknown reovirus of bat origin is associated with an acute respiratory disease in humans. Author Affiliations Edited by Robert A. 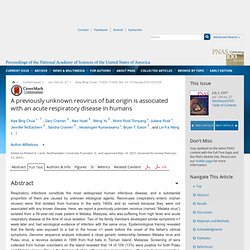 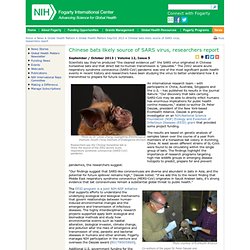 " The 2002 severe acute respiratory syndrome coronavirus (SARS-CoV) pandemic was one of the most significant public health events in recent history and researchers have been studying the virus to better understand how it is transmitted to prepare for future outbreaks. Photo by Dr. SCIENCEMEDIACENTRE_CO_NZ 31/10/13 SARS may have originated in bats – experts respond. Two novel coronaviruses that are closely related to SARS have been found in Chinese horseshoe bats. 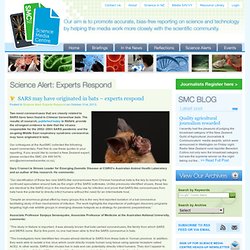 The results of research, published today in Nature, provide the strongest evidence to date that the viruses responsible for the 2002–2003 SARS pandemic and the on-going Middle East respiratory syndrome coronavirus may have originated in bats. Our colleagues at the AusSMC collected the following expert commentary. Feel free to use these quotes in your reporting. If you would like to contact a New Zealand expert, please contact the SMC (04 499 5476; smc@sciencemediacentre.co.nz).