BMC PUBLIC HEALTH 01/05/20 The bat meat chain and perceptions of the risk of contracting Ebola in the Mount Cameroon region. The hunting of bushmeat—the meat of wild animals—is a common and ancient practice in rural African villages, particularly in forested areas. 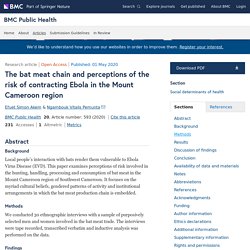 Bushmeat has long been a delicacy among forest-dwelling peoples in Africa [1]. The African bushmeat trade is estimated annually to generate millions of American dollars [2]. In Western and Central Africa, the demand for bushmeat is estimated at 4.5 million tons per year and is rising. Sharply rising consumption of bushmeat is not a problem exclusive to Africa. For instance, demand is expected to quadruple in the Amazon basin [3]. is not only skyrocketing, it is projected to quadruple the demand for bushmeat in the Amazon while in the Congo Basin, the consumption of wildlife meat is estimated at 4.5 million tons a year [4]. 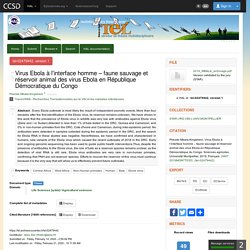 More than four decades after the first identification of the Ebola virus, its reservoir remains unknown. We have shown in this work that the prevalence of Ebola virus in wildlife was very low with antibodies against Ebola virus (Zaire and / or Sudan) detected in less than 1% of bats tested in the DRC, Guinea and Cameroon; and 0% in non-human primates from the DRC, Cote d'Ivoire and Cameroon, during inter-epidemic period. No antibodies were detected in samples collected during the epidemic period in the DRC, and the search for Ebola RNA in these studies was negative. Nevertheless, we have confirmed and characterized in humans, new variants of the Ebola virus which caused the recent outbreaks of 2018 in the DRC. SCIENCEDAILY 24/01/20 Marburg virus found in Sierra Leone bats. Scientists have detected Marburg virus in fruit bats in Sierra Leone, marking the first time the deadly virus has been found in West Africa. 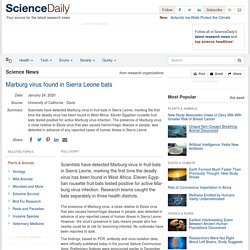 Eleven Egyptian rousette fruit bats tested positive for active Marburg virus infection. NATURE 24/01/20 Isolation of Angola-like Marburg virus from Egyptian rousette bats from West Africa. Bat capture and processing All of the work described herein was performed as a collaborative effort between Njala University, the Centers for Disease Control and Prevention (CDC), the University of Makeni, and the University of California, Davis (UCD) USAID-PREDICT. 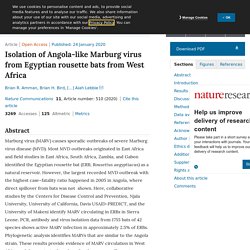 All animal sampling was performed with permission from the Ministry of Agriculture, Forestry, and Food Security, with approval of both the Institutional Animal Care and Use Committees (IACUC) at the University of California, Davis (protocol number: 16048) and the CDC (protocol number: 2943AMMMULX). The chiropteran taxonomy used in this manuscript follows that of Wilson and Reeder (2005)44. Bats were captured at four sites in the Sierra Leone districts of Moyamba (Kasewe Cave), Kailahun (Tailu Village), Koinadugu (Kakoya Cave), and Kono (Koema Cave; Fig. 1). Bats at Kasewe Cave and Tailu Village were captured using mist nets placed at locations around the cave or in a suitable habitat with natural flyways and corridors. 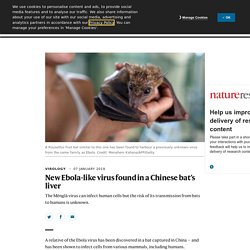 These and other forms of loss and waste claim one-third of the world’s food supply, according to an estimate by the United Nations Food and Agricultural Organization (FAO). Monika van den Bos Verma of Wageningen University and Research in The Hague, the Netherlands, and her colleagues wanted to explore how consumer affluence affects food waste.

The researchers drew on 2003 data collected by the World Health Organization, the FAO and others to estimate calories purchased, calories consumed and calories wasted by people around the globe. NATURE 07/01/19 Characterization of a filovirus (Měnglà virus) from Rousettus bats in China. MAMMAL REVIEW 30/10/19 Human activities link fruit bat presence to Ebola virus disease outbreaks. Introduction Environmental changes caused by humans can drive the emergence of infectious diseases throughout the world (Daszak et al. 2000, Rogalski et al. 2017). 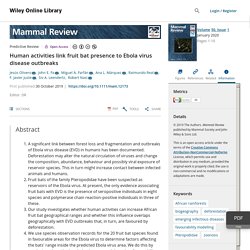 In the case of the Ebola virus disease (EVD), a zoonosis caused by Ebolavirus spp. (family Filoviridae) that is often fatal in humans, a significant link between forest loss and fragmentation and disease outbreaks in humans, has been documented (Rulli et al. 2017, Olivero et al. 2017b). Details of how deforestation affects viral spillover are yet to be discovered, but it is likely that the reduction in forest cover may alter the natural circulation of viruses as well as changing the composition, abundance, behaviour and possibly viral exposure of reservoir species (such as bats; Smith & Wang 2013, Maganga et al. 2014).

This in turn may increase contact between infected animals and humans (Castro & Michalski 2014, Leendertz 2016, Loveridge et al. 2016). Methods Geographical context. JOURNAL OF INFECTIOUS DISEASES - JUIN 2019 - Antibody-Mediated Virus Neutralization Is Not a Universal Mechanism of Marburg, Ebola, or Sosuga Virus Clearance in Egyptian Rousette Bats. We use cookies to enhance your experience on our website.By continuing to use our website, you are agreeing to our use of cookies. 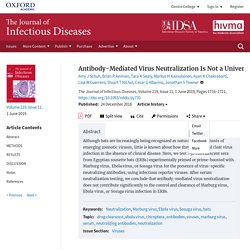 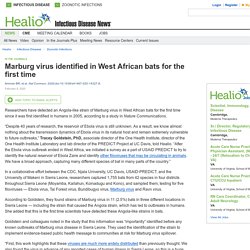 “Despite 40 years of research, the reservoir of Ebola virus is still unknown. As a result, we know almost nothing about the transmission dynamics of Ebola virus in its natural host and remain extremely vulnerable to future outbreaks,” Tracey Goldstein, PhD, associate director of the One Health Institute, director of the One Health Institute Laboratory and lab director of the PREDICT Project at UC Davis, told Healio. “After the Ebola virus outbreak ended in West Africa, we initiated a survey as a part of USAID PREDICT to try to identify the natural reservoir of Ebola Zaire and identify other filoviruses that may be circulating in animals. EUROPEAN JOURNAL OF WILDLIFE RESEARCH 03/01/20 Ebola spillover correlates with bat diversity. Epidemics Volume 29, December 2019, Predicting Ebola virus disease risk and the role of African bat birthing. 1. 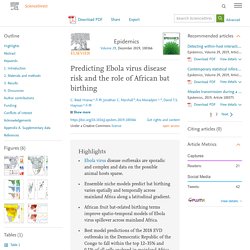 Introduction Since the first reports of Ebola virus disease (EVD) in the late 1970s outbreaks have occurred sporadically (Pourrut et al., 2005), with 34 identified human index cases to date (Fig. 1). The 2013–2016 West African EVD epidemic caused the death of at least 11,310 people and was a Public Health Emergency of International Concern (Briand et al., 2014). Outbreaks have been unpredictable, sometimes including more than one primary transmission or ‘spillover’ event, and together with high case fatality rates cause significant strain on public health authorities in typically resource poor settings (Pigott et al., 2016). Additional conservation concerns have arisen such as the large scale great ape die-offs linked to EVD in central Africa (Leroy et al., 2004).

Fig. 1. The genus Ebolavirus (family Filoviridae) is composed of five recognized viral species, four of which are agents of EVD (Olival and Hayman, 2014). 2. 3. Fig. 2. EMERGING MICROBES & INFECTIONS 08/10/19 Seroreactivity against Marburg or related filoviruses in West and Central Africa. Filoviruses, including Ebola and Marburg viruses, cause outbreaks of viral disease with a broad range of clinical symptoms, including hemorrhagic fever, and high fatality rates in humans and non-human primates in Central Africa [1Murray MJ. 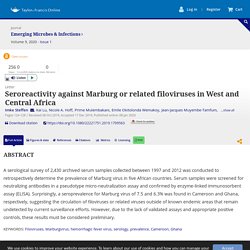 Ebola virus disease: a review of its past and present. Anesth Analg. 2015;121:798–809. doi: 10.1213/ANE.0000000000000866 [Crossref], [Web of Science ®], [Google Scholar]]. Increasing evidence points to an association of filoviruses with fruit bats as at least one natural reservoir host. Marburg virus has been isolated from Rousettus aegyptiacus bats, and viral RNA and antibodies have been detected in several other species [2Amman BR, Carroll SA, Reed ZD, et al.

CIRAD 18/12/19 Le virus Ebola est-il bien transmis par les chauves-souris ? CDC EID - AOUT 2019 - Marburgvirus in Egyptian Fruit Bats, Zambia. CDC 24/01/20 Marburg Virus Found Circulating in Bats in West Africa. Scientists from the Centers for Disease Control and Prevention (CDC) have identified active circulation of Marburg virus in bat colonies for the first time in Sierra Leone, according to a study published today in Nature Communications. CDC scientists and partners found that 2.5 percent of 435 Egyptian rousette fruit bats tested from four districts in Sierra Leone tested positive for Marburg virus. Some of the infected bats had a strain similar to the one seen in Angola in 2005, thought to be the most virulent strain of Marburg virus that has emerged thus far. During the 2005 outbreak, 9 out of 10 people who contracted the virus died. In contrast, during the 2014-2016 West African Ebola outbreak, 4 out of 10 people reported ill later died.

The recent Ebola epidemic in West Africa (2013-2016) has drawn scientific attention to the problem of emerging viral zoonoses. It was the largest Ebola outbreak in history, and caused over 11,300 deaths. BIOENGINEER 07/01/19 Duke-NUS Researchers Discover New Bat-Borne Virus Related To Ebola. Viruses 2018, 10(10), 549; Ebola Virus Maintenance: If Not (Only) Bats, What Else? CDC EID - DEC 2018 - Survey of Ebola Viruses in Frugivorous and Insectivorous Bats in Guinea, Cameroon, and the Democratic Republic of the Congo, 2015–2017. Helene M. De Nys1, Placide Mbala Kingebeni1, Alpha K. UCDAVIS 27/08/18 Ebola Species Found in Bats Ahead of Any Potential Outbreak. VIRUSES 10/02/18 Antibody Responses to Marburg Virus in Egyptian Rousette Bats and Their Role in Protection against Infection. PLOS 12/06/17 Modeling the Ebola zoonotic dynamics: Interplay between enviroclimatic factors and bat ecology.

Abstract Understanding Ebola necessarily requires the characterization of the ecology of its main enzootic reservoir, i.e. bats, and its interplay with seasonal and enviroclimatic factors. Here we present a SIR compartmental model where we implement a bidirectional coupling between the available resources and the dynamics of the bat population in order to understand their migration patterns. Our compartmental modeling approach and simulations include transport terms to account for bats mobility and spatiotemporal climate variability. We hypothesize that environmental pressure is the main driving force for bats’ migration and our results reveal the appearance of sustained migratory waves of Ebola virus infected bats coupled to resources availability. Ultimately, our study can be relevant to predict hot spots of Ebola outbreaks in space and time and suggest conservation policies to mitigate the risk of spillovers.