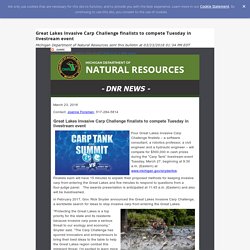 Dr. D.J. Judges also selected six runners-up whose entries they felt were worthy of sharing with researchers in the field of invasive carp management. The runners-up include: Micheal Ahimbisibwe, the founder and director of research for Bravespec Systems, Ltd., an energy and research development company.Dr. Invasive bighead, silver and black carp can significantly alter the Great Lakes ecosystem, affecting the $7 billion fishery, $16 billion boating industry and others dependent on the Great Lakes and its tributaries. In June 2017, a silver carp was caught just nine miles away from Lake Michigan, below the electric barrier system designed to keep invasive carp out of the Great Lakes. Invasive Species Centre via YOUTUBE 28/03/17 Modeling Potential Effects of Bighead and Silver Carp on Great Lakes Food Webs. 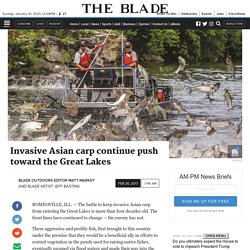 The front lines have continued to change — the enemy has not. These aggressive and prolific fish, first brought to this country under the premise that they would be a beneficial ally in efforts to control vegetation in the ponds used for raising native fishes, eventually escaped via flood waters and made their way into the Mississippi River system. On other occasions, Asian carp were likely unintentionally stocked in lakes and ponds, disguised in a shipment of what was believed to be fingerling catfish. Since reaching the Mississippi, Asian carp — primarily the most destructive silver and bighead species — have surged in every direction. Bighead and/or silver carp are now found throughout the Mississippi from New Orleans to Minnesota, and they have spread in the Missouri River system into the Dakotas and on the Ohio River as far upstream as Pittsburgh. ■ 2012: U.S. SCIENTIFIC AMERICAN 20/09/17 Great Lakes Defenders Have a Shocking Idea to Stave Off Invasive Carp.

Since the 1970s invasive Asian carp have steadily migrated north into the U.S. 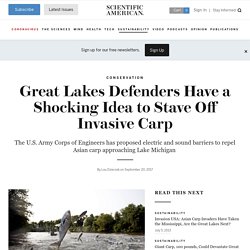 Midwest, infesting the watersheds of the Mississippi, Missouri and Illinois rivers. The voracious bottom-feeders can strip entire river ecosystems of zooplankton, the basic food of native fish species—and now they seem poised to breach the Great Lakes ecosystem. Earlier this summer a commercial fisherman contracted by the Asian Carp Regional Coordinating Committee (ACRCC) caught a species of the intruding fish in Illinois, only 14 kilometers south of Lake Michigan. That sobering find in the Des Plaines River has engineers and scientists scrambling for a way to halt these slippery aliens. An adult Asian carp can weigh 45 kilograms and eat the equivalent of 5 to 20 percent of its body weight every day. 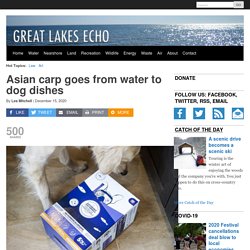 Image: Wilder Harrier By Lea Mitchell Wilder Harrier, a Canadian pet food company, is using another unlikely alternative protein source to have a low environmental impact, yet a nutritious meal for dogs. On Nov. 2, the Montreal-based company released a new dog food formula that includes Asian carp, an invasive species in both the United States and Canadian waterways. Philippe Poirier, a co-founder of Wilder Harrier, said the company started experimenting with adding Asian carp into the food a year ago because it saw the environmental threats the fish posed. “We use insect and plant protein, which releases less greenhouse gases [than meat], but we knew there was more we could do for the environment. LE DEVOIR 20/03/19 La carpe asiatique risque de coûter cher dans les Grands Lacs.