REUTERS 15/05/19 Brazil seeks China's OK for genetically modified sugarcane. CANALRURAL_UOL_COM_BR 18/12/18 Transgênicos: CTNBio aprova nova variedade de cana resistente à broca. FOOD NAVIGATOR 12/08/18 Brazil’s first GM sugarcane deemed safe by US FDA. BRAZIL MONITOR 24/06/18 Developers of transgenic sugarcane have had their studies destroyed. The story behind the development of the first genetically modified cane is an example of the attempts and mistakes of science – common to all countries, because of the uncertainties of the discoveries, but even more difficult in a country like Brazil, where economic oscillations cause other obstacles. 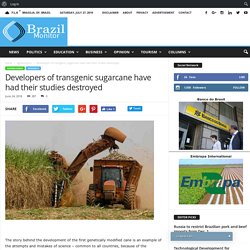 The work that mill owners now benefit from began to be developed in the late 1990s, when the Foundation for Research Support of the State of São Paulo (FAPESP) decided to encourage the then incipient genomics – branch of biochemistry that studies and modifies the genome of an organism. A virtual network was set up with 60 laboratories. “The bacterium (whose gene would be deciphered) had to be important and with a relatively small genome,” says Fernando Reinach, State columnist and then one of the coordinators of Fapesp’s scientific board and responsible for the creation of the network. The first sequencing was from xylella, which attacks orange groves causing the disease known as yellow. 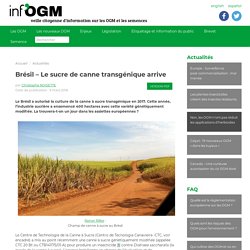 SCIDEV 20/06/17 Brazil’s transgenic sugarcane stirs up controversy. [RIO DE JANEIRO] A genetically modified (GM) cane variety that can kill the sugarcane borer (Diatraea saccharalis) has been approved in Brazil, to the delight of some scientists and the dismay of others, who say it may threaten Brazilian biodiversity. 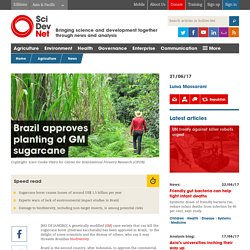 Brazil is the second country, after Indonesia, to approve the commercial cultivation of GM sugarcane. The approval was announced by the Brazilian National Biosafety Technical Commission (CTNBio) on June 8. Sugarcane borer is one of the main pests of the sugarcane fields of South-Central Brazil, causing losses of approximately US$1.5 billion per year. “Breeding programmes could not produce plants resistant to this pest, and the existing chemical controls are both not effective and severely damaging to the environment,” says Adriana Hemerly, a professor at the Federal University of Rio de Janeiro, in an interview with SciDev.Net.

According to Pillar, there is a lack of data about the frequency with which it breeds with wild varieties. SCIDEV 22/06/17 Brazil approves planting of GM sugarcane. MERID 22/06/17 Brazil's Transgenic Sugarcane Stirs Up Controversy. Brazil's Transgenic Sugarcane Stirs Up Controversy Summary posted by Meridian on 6/22/2017 Source: SciDev.net (20 Jun 2017) Author(s): Luisa Massarani The recent approval by Brazil of a genetically modified (GM) sugarcane has pleased some scientists and dismayed others, who claim it may threaten biodiversity in the country. 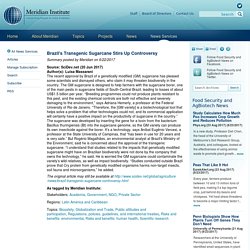 The GM sugarcane is designed to help farmers with the sugarcane borer, one of the main pests in sugarcane fields of South-Central Brazil, leading to losses of about US$1.5 billion per year. The original article may still be available at. GENETIC LITERACY PROJECT 09/06/17 New GMO crop: Brazil approves insect resistant sugarcane for commercial use. GENETIC LITERACY PROJECT 01/12/16 Brazil expected to release first variety of GMO sugarcane in 2017. REUTERS 08/06/17 Brazil approves world's first commercial GM sugarcane: developer CTC. THE HINDU BUSINESS LINE 18/06/12 GM sugarcane trial planting set to take off in Brazil from Oct. Ribeirão Preto (Brazil), June 18: Trial planting of genetically-modified (GM) sugarcane is likely to begin in October this year in Brazil. 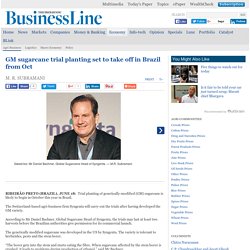 The Switzerland-based agri-business firm Syngenta will carry out the trials after having developed the GM variety. According to Mr Daniel Bachner, Global Sugarcane Head of Syngenta, the trials may last at least two harvests before the Brazilian authorities give permission for its commercial launch. The genetically modified sugarcane was developed in the US by Syngenta. The variety is tolerant to herbicides, pests and the stem borer. “The borer gets into the stem and starts eating the fibre. Clearance In Brazil, the permission for conducting trials of GM crops and launching them commercially is given by the National Biosecurity Council. For Syngenta, dabbling in the genetically modified area is nothing new. According to available data, 80 per cent of corn grown in the US in 2010 was genetically modified.

Growth potential. GMO COMPASS 04/08/09 Brazil: GM sugar cane with a 25 percent yield increase expected in 10 years. (04 August 2009) A new variety of sugar cane promising yield increases up to 25 percent, while being more drought-tolerant than conventional strains, is expected to be commercially available in Brazil by 2020. 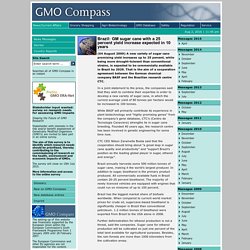 That is the aim of a cooperation agreement between the German chemical company BASF and the Brazilian research centre CTC. In a joint statement to the press, the companies said that they wish to combine their expertise in order to develop a new variety of sugar cane, in which the current average yield of 80 tonnes per hectare would be increased to 100 tonnes. While BASF will primarily contribute its experience in plant biotechnology and "highly promising genes" from the company’s gene database, CTC’s (Centro de Tecnologia Canaviera) strengths lie in sugar cane breeding.

Founded 40 years ago, the research centre has been involved in genetic engineering for some time now. Brazil annually harvests some 500 million tonnes of sugar cane, making it the world’s largest producer. AGRA-NET 27/07/16 Brazil - Transgenic sugarcane should be available in 2018.