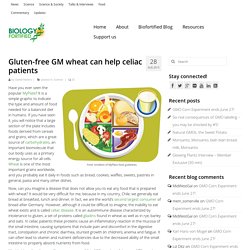 It is a simple graphic to indicate the type and amount of food needed for a balanced diet in humans. If you have seen it, you will notice that a large section of the plate includes foods derived from cereals and grains, which are a great source of carbohydrates, an important biomolecule that our body uses as a primary energy source for all cells. Wheat is one of the most important grains worldwide, and you probably eat it daily in foods such as bread, cookies, waffles, sweets, pastries in general, pasta and many other dishes. J Agric Food Chem. 2015 Oct 28;63(42):9323-32. Assessment of the Allergenic Potential of Transgenic Wheat (Triticum aestivum) with Reduced Levels of ω5-Gliadins, the Major Sensitizing Allergen in Wheat-Dependent Exercise-Induced Anaphylaxis. 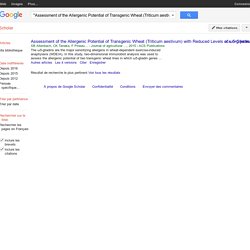 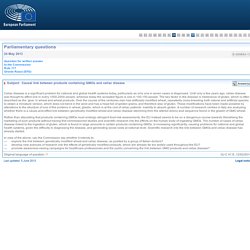 Until only a few years ago, celiac disease was thought to affect one in every 1000-2000 people, whereas today the accepted figure is one in 100-150 people. The key factor in the disease is intolerance of gluten, which is often described as the ‘glue’ in wheat and wheat products. Over the course of the centuries man has artificially modified wheat, repeatedly cross-breeding both natural and artificial species to obtain a miniature version, which does not bend in the wind and has a head full of golden grains, and therefore also of gluten. WASHINGTON STATE UNIVERSITY - Developing Wheat Free of Harmful Gluten Proteins. Diter von Wettstein Develping Wheat Free of Harmful Gluten Proteins Washington State University researcher Diter von Wettstein is working toward developing wheat varieties safe to eat for people who have Celiac disease. 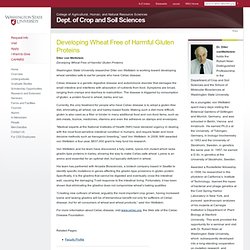 Celiac disease is a genetic digestive disease and autoimmune disorder that damages the small intestine and interferes with absorption of nutrients from food. Symptoms are broad, ranging from cramps and diarrhea to malnutrition. MERCOLA 23/07/09 Why is Wheat Gluten Disorder on the Rise? July 23, 2009 | 145,503 views Share A study using frozen blood samples taken from Air Force recruits 50 years ago has found that intolerance of wheat gluten, a debilitating digestive condition, is four times more common today than it was in the 1950’s. 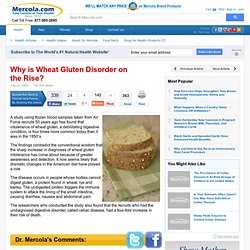 The findings contradict the conventional wisdom that the sharp increase in diagnoses of wheat gluten intolerance has come about because of greater awareness and detection. It now seems likely that dramatic changes in the American diet have played a role. The disease occurs in people whose bodies cannot digest gluten, a protein found in wheat, rye and barley. The researchers who conducted the study also found that the recruits who had the undiagnosed digestive disorder, called celiac disease, had a four-fold increase in their risk of death. FOOD NAVIGATOR 13/12/13 Celiac Disease Foundation, plant geneticist, challenge report linking GMOs to celiac disease, gluten sen. A controversial new report alleging that genetically engineered foods could be an environmental trigger for gluten sensitivity and celiac disease has been challenged by the Celiac Disease Foundation and a leading plant geneticist. 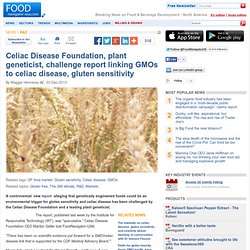 The report, published last week by the Institute for Responsible Technology (IRT), was "speculative," Celiac Disease Foundation CEO Marilyn Geller told FoodNavigator-USA. "There has been no scientific evidence put forward for a GMO/celiac disease link that is supported by the CDF Medical Advisory Board. " Meanwhile, plant geneticist Dr. Wayne Parrott - professor of crop science at the University of Georgia - claimed the report relied on "a handful of deeply flawed" studies and did not reference the "more than 1,000 studies that have been published in refereed journals and which show that GM crops are as safe as their counterparts.

" IRT: There have been no clinical human feeding trials on genetically engineered foods. ISAUDE 19/09/11 GE wheat removes 95% of gluten allergy in a patient with celiac disease. A new variety of corn, obtained by genetic engineering, a reaction causes 95% less toxic, retains its nutritional properties and can be tolerated by most people who suffer allergic reactions to gluten. 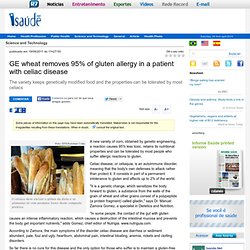 Celiac disease, or celiaquia, is an autoimmune disorder, meaning that the body's own defenses to attack rather than protect it. It consists in part of a permanent intolerance to gluten and affects up to 2% of the world. "It is a genetic change, which sensitizes the body forward to gluten, a substance from the walls of the grain of wheat and other grains consist of a polypeptide (a protein fragment) called gliadin," says Dr. Manuel Zamora Gomez, a specialist in Dietetics and Nutrition. "In some people, the contact of the gut with gluten causes an intense inflammatory reaction, which causes a destruction of the intestinal mucosa and prevents the body get important nutrients," adds Gomez, chief editor of Nutrigia. www.nutriguia.com. Exploding-Gluten-Sensitivity_ 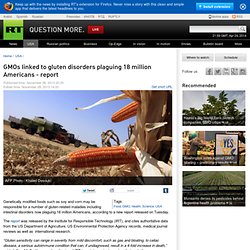 The report was released by the Institute for Responsible Technology (IRT), and cites authoritative data from the US Department of Agriculture, US Environmental Protection Agency records, medical journal reviews as well as international research. CELIAC DISEASE ABOUT 13/04/13 Is genetically modified wheat causing increases in gluten issues? Answer: No, genetically modified wheat is not to blame for the hikes in celiac and gluten sensitivity ... for the simple reason that GMO wheat simply isn't being grown commercially (yet). 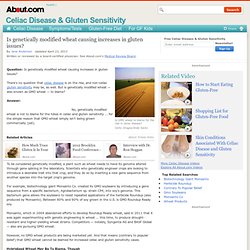 To be considered genetically modified, a plant such as wheat needs to have its genome altered through gene splicing in the laboratory. Scientists who genetically engineer crops are looking to introduce a desirable trait into that crop, and they do so by inserting a new gene sequence from another species into the target crop's genome. For example, biotechnology giant Monsanto Co. created its GMO soybeans by introducing a gene sequence from a specific bacterium, Agrobacterium sp. strain CP4, into soy's genome. This bacterium gene allows the soybeans to resist repeated applications of the herbicide Roundup (also produced by Monsanto). However, no GMO wheat products are being marketed yet. Hybridized Wheat May Be To Blame, Though In hybridization, scientists don't tinker directly with the plant's genome. J Agric Food Chem. 2013 February 13; 61(6): 1155–1159. Can an Increase in Celiac Disease Be Attributed to an Increase in the Glu. 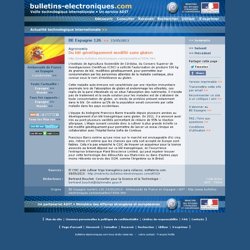 PARLEMENT EUROPEEN - Réponse à question E-005853-13 Causal link between products containing GMOs and celiac disease. Celiac disease is a significant problem for national and global health systems today, particularly as only one in seven cases is diagnosed. Until only a few years ago, celiac disease was thought to affect one in every 1000-2000 people, whereas today the accepted figure is one in 100-150 people. The key factor in the disease is intolerance of gluten, which is often described as the ‘glue’ in wheat and wheat products. Over the course of the centuries man has artificially modified wheat, repeatedly cross-breeding both natural and artificial species to obtain a miniature version, which does not bend in the wind and has a head full of golden grains, and therefore also of gluten.