BOVINE VETERINARIAN 08/10/14 New vaccine technology combats Bluetongue virus (issu de biologie synthétique) Scientists have developed a faster method of producing an effective vaccine for the devastating animal disease caused by Bluetongue virus (BTV); a virus that has infected and killed thousands of livestock throughout the world. 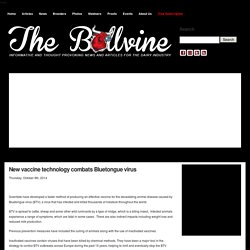 BTV is spread to cattle, sheep and some other wild ruminants by a type of midge, which is a biting insect. Infected animals experience a range of symptoms, which are fatal in some cases. There are also indirect impacts including weight loss and reduced milk production. Previous prevention measures have included the culling of animals along with the use of inactivated vaccines. Inactivated vaccines contain viruses that have been killed by chemical methods. However, despite being effective, they only offer protection against a specific strain of the virus. “Synthetic” viral particles are created rapidly in the laboratory using sequence information from the genetic material of the virus. NATURE 13/05/19 Synthetic biology strategies for microbial biosynthesis of plant natural products. 1.Nielsen, J. 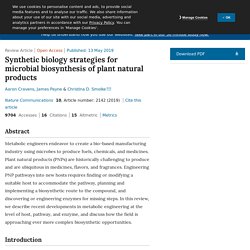 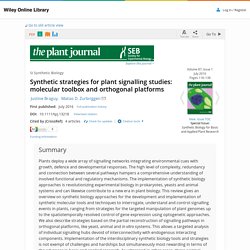 Such intricate pathways are best studied by simplification: in lower organisms, in isolated signalling blocks/modules or in completely heterologous systems, disposing of the environment complexity and factors likely to interfere with the study of the isolated actors. We describe here the application of synthetic biology strategies and a set of heterologous platforms that can be implemented to facilitate the analysis and signalling pathway dissection.

These systems span a range of evolutionary distance and orthogonality, from other higher and lower plants, up to yeast, animal and in vitro systems. Plant Science Center ETH-Z VIA YOUTUBE 12/12/16 Natural Products-from plant based production to synthetic biology. DAILY MONITOR (UG) 21/07/17 Advancing from genetic modification to synthetic biology in plant breeding. The arguments and controversies arising from use of genetic modification mechanism in plant breeding will continue to surface but agricultural scientists globally are moving on with application of emerging new technologies for improved plant breeding to the benefit of farmers and consumers. 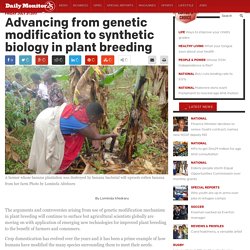 Crop domestication has evolved over the years and it has been a prime example of how humans have modified the many species surrounding them to meet their needs. Humans have progressed from selecting plants for the most useful flora to actively growing designated crops in the form of agriculture for calculated breeding that is performed today. As these improvements evolved into modern agriculture, man’s ability to modify the traits of plants for societal needs has become more targeted. Although many of these traits have revolved around agricultural yield for the purpose of food production, modern society also requires the use of crops as a clean energy source in the form of biofuels. 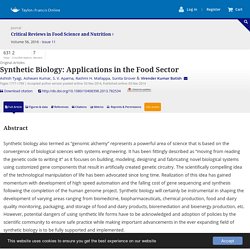 It has been fittingly described as “moving from reading the genetic code to writing it” as it focuses on building, modeling, designing and fabricating novel biological systems using customized gene components that result in artificially created genetic circuitry. The scientifically compelling idea of the technological manipulation of life has been advocated since long time. 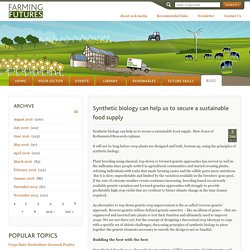 Huw Jones of Rothamsted Research explains. It will not be long before crop plants are designed and built, bottom up, using the principles of synthetic biology. Plant breeding using classical, top-down or forward genetic approaches has served us well in the millennia since people settled in agricultural communities and started crossing plants, selecting individuals with traits that made farming easier and the edible parts more nutritious.

But it is slow, unpredictable and limited by the variation available in the breeders’ gene pool. If the rate of extreme weather events continues increasing, breeding based on currently available genetic variation and forward genetics approaches will struggle to provide predictably high crop yields that are resilient to future climate change in the time frames required. An alternative to top-down genetic crop improvement is the so called ‘reverse genetic’ approach. Why? EMBRAPA - MAI 2016 - Présentation : Synthetic biology and its applications in Agriculture. INNOVATEUK_ORG 26/01/16 Synthetic biology in the real world: Case studies - Detection of food spoilage organisms using bionanotechnology. New synthetic biology technologies are starting to offer exciting opportunities across a range of industries including manufacturing, pharmaceuticals, biofuels and health. 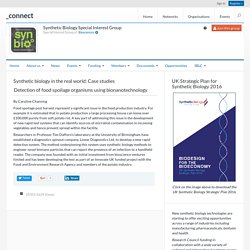 Research Council funding in collaboration with a wide variety of national and international partners across academia and industry, is supporting the long-term growth of UK synthetic biology, development of a highly skilled workforce and an infrastructure to underpin and enable cutting edge research in industry and academia, as well as providing support for synthetic biology start-up companies. The pervasive potential of synthetic biology is brought to life through a series of case studies ranging from a biosensor toolkit with the ability to treat chronic conditions such as diabetes through to using enzymes from yeast mould to unlock cleaner routes to producing biofuel. EUROPE 18/12/15 Présentations de : WORKSHOP ON SYNTHETIC BIOLOGY TOOK PLACE ON 10 DECEMBER 2015. WASHINGTON POST 17/12/15 How synthetic biology could solve our banana problem.

ECOWATCH 27/08/14 Häagen-Dazs Says No to ‘Extreme’ Genetic Engineering Techniques. Ice cream lovers who prefer to steer clear of genetically modified organisms (GMO) will be happy to hear that Häagen-Dazs has confirmed it will not use vanilla produced via synthetic biology, a new set of “extreme” genetic engineering techniques. 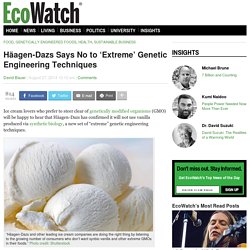 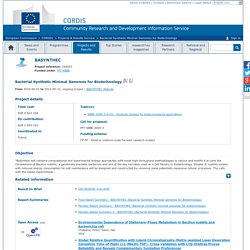 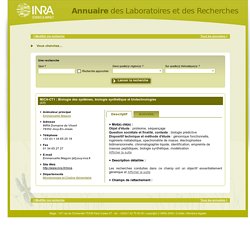 Synthetic biology, nanotechnology, genetic engineering and other applications of biotechnology - and the public's role in determining their acceptable uses -- were all addressed by panelists during the session. The goal for the session, which was part of the nation's largest and most prestigious general science meeting held annually, was to encourage a dialogue among scientists and the public, said Hill, a Moscow-based molecular physiologist who studies muscle growth in cattle. EUROPE - DG RECHERCHE - Biotechnologies, Agriculture and Food - 2009 - 19th Meeting of the EC-US Task Force on Biotechnology Research.

The European Commission (EC) - United States (US) Task Force on Biotechnology Research met for the 19th time at the Lawrence Berkeley National Laboratory in San Francisco, USA, June 25-26, 2009. The meeting was co-chaired by Judith St. John, Deputy Administrator, US Department of Agriculture Agricultural Research Service (USDA ARS), US, and Timothy Hall, Acting Director for Biotechnologies, Agriculture and Food Research, Research Directorate - General, European Commission. SCIENTIFIC AMERICAN 25/04/13 Can Synthetic Biology Keep Your Food Safe? Sample6 hopes to use their new contamination test to keep food, like these packaged greens, safe from listeria. On a hot summer day, nothing spells refreshment quite like a slice of juicy, orange cantaloupe.

But in summer 2011, cantaloupes reached plates with an unwanted addition: listeria. In the deadliest foodborne illness outbreak since 1925, cantaloupes contaminated with this bacterium killed 33 people. Unfortunately, cantaloupes weren’t the end of the story. A year later, listeria tainted another well-loved American staple: cheese. A few months from now, a Boston-based start-up company will market a test kit that will do just that: detect this deadly bacterium in the processing plant, before it reaches the grocery store.

Scheduled for launch in July, the test developed by Sample6 Technologies provides results in three to four hours, compared to 16 and 48 hours for current assays for bacterial contamination. “It’s much better if you test the process as it is working.” Food Technol. Biotechnol. 51 (2013) Synthetic Biology: A Novel Approach for the Construction of Industrial Microorganisms. FOOD SCIENCE TECHNOLOGY JOURNAL 02/03/15 New Synthetic Biology Centre. Researchers at the University of Warwick have won a £12 million award to create a new Centre to develop advanced technologies in synthetic biology. Vince Cable announced the new Centre as part of a £40M investment in UK synthetic biology coming from the Biotechnology and Biological Sciences Research Council (BBSRC), Engineering and Physical Sciences Research Council (EPSRC), the Medical Research Council (MRC) and capital investment from UK Government.