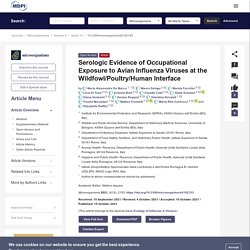 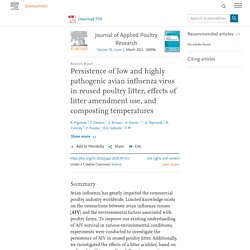 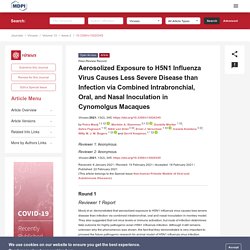 They also suggested that not virus levels or immune activation, but route of infection determines fatal outcome for highly pathogenic avian H5N1 influenza infection. PLOS 20/03/20 Knowledge and remaining gaps on the role of animal and human movements in the poultry production and trade networks in the global spread of avian influenza viruses – A scoping review. Abstract Poultry production has significantly increased worldwide, along with the number of avian influenza (AI) outbreaks and the potential threat for human pandemic emergence. 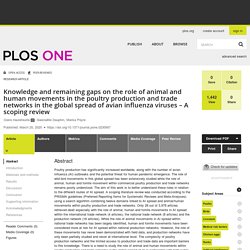 The role of wild bird movements in this global spread has been extensively studied while the role of animal, human and fomite movement within commercial poultry production and trade networks remains poorly understood. The aim of this work is to better understand these roles in relation to the different routes of AI spread. A scoping literature review was conducted according to the PRISMA guidelines (Preferred Reporting Items for Systematic Reviews and Meta-Analyses) using a search algorithm combining twelve domains linked to AI spread and animal/human movements within poultry production and trade networks. 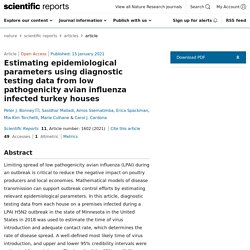 Diagnostic test results were available for each of the 33 barns that tested positive across the eight premises from the time of detection until the birds were sent to processing as part of controlled marketing9. The current article focuses on the estimated time of virus introduction and adequate contact rate results for a single premises, the 2nd premises detected in Kandiyohi county in Minnesota (Kandiyohi 2). Results from the other premises have been reported10. All five barns on Kandiyohi 2 tested positive for virus. Stochastic within-house LPAI transmission model The number of initially infected birds in a house was dependent on whether the house was the first infected on the premises, as deduced from diagnostic testing data. FEMS MICROBIOLOGY REVIEWS 05/08/19 Global patterns of avian influenza A (H7): virus evolution and zoonotic threats. Skip to Main Content Advertisement Search Close Advanced Search Search Menu Skip Nav Destination Article Navigation. 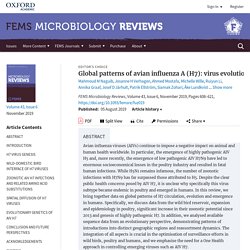 SCIENTIFIC REPORTS 25/11/20 Evolution and pathogenicity of H6 avian influenza viruses isolated from Southern China during 2011 to 2017 in mice and chickens. Virus isolation and identification A total of 22 H6 AIVs were isolated from ducks and geese without any obvious clinical signs in LPMs during 2010–2017. 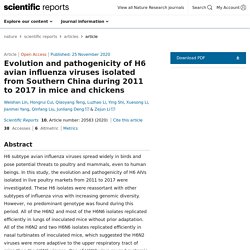 All of viruses were propagated in SPF chicken embryonated eggs and their virus titers ranged from 106.3 to 109.5 EID50/100 μl. Full genomes of 7 H6N2 and 15 H6N6 viruses were sequenced and deposited to the NCBI database, the accession number and abbreviations of viruses used in this study have been listed in Table 1. Molecular characterization According to sequence analysis, all of the H6 isolates shared the same amino acids (PQIETR/GLF) with single basic amino acid at the cleavage site between HA1 and HA2, which displayed a low pathogenic feature32.

Those 22 viruses contained 119E, 274H and 294 N on the NA proteins (N2 numbering36), which suggested that all viruses are sensitive to oseltamivir37. SCIENTIFIC REPORTS 04/11/20 A decision support framework for prediction of avian influenza. NATURE 02/11/20 Parallel evolution in the emergence of highly pathogenic avian influenza A viruses. 1.Webster, R. 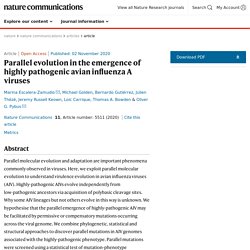 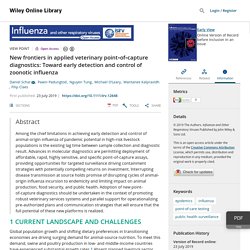 Note. FRONT. VET. SCI. 22/05/19 Editorial: Epidemiology of Avian Influenza Viruses. Avian influenza (AI) is a highly contagious viral disease, characterized by an intense circulation in many wild waterbird reservoir populations, with periodical introduction into the domestic poultry sector. AI viruses have been the source of devastating economic losses in the poultry industry over the last three decades and have become a major veterinary and public health concern due to their zoonotic potential (1, 2). Outbreaks caused by highly pathogenic avian influenza (HPAI) viruses have caused serious animal health crises worldwide, such as the high case fatality rates in poultry, the control measures that are applied (massive pre-emptive culling or vaccination) and the consequences of virus detection on the international poultry produce trade. Undoubtedly, the rapid and continuous evolution of AI viruses make their surveillance and control particularly challenging.

Timely information is required to optimize the emergency response during outbreaks. Author Contributions Funding 1. FRONT. VET. SCI. 17/12/18 Detecting and Predicting Emerging Disease in Poultry With the Implementation of New Technologies and Big Data: A Focus on Avian Influenza Virus. Jake Astill1, Rozita A. Dara1, Evan D. Fraser1 and Shayan Sharif1* 1University of Guelph, Canada IntroductionGlobal population growth, along with rising affluence in Asia, are driving up not only our total demand for food, but also the amount of protein required to feed all of humanity (1,2). VIRUSES 28/08/18 The Pandemic Threat of Emerging H5 and H7 Avian Influenza Viruses. The 1918 H1N1 Spanish Influenza pandemic was the most severe pandemic in modern history. Unlike more recent pandemics, most of the 1918 H1N1 virus’ genome was derived directly from an avian influenza virus.

Recent avian-origin H5 A/goose/Guangdong/1/1996 (GsGd) and Asian H7N9 viruses have caused several hundred human infections with high mortality rates. While these viruses have not spread beyond infected individuals, if they evolve the ability to transmit efficiently from person-to-person, specifically via the airborne route, they will initiate a pandemic. Therefore, this review examines H5 GsGd and Asian H7N9 viruses that have caused recent zoonotic infections with a focus on viral properties that support airborne transmission. Several GsGd H5 and Asian H7N9 viruses display molecular changes that potentiate transmission and/or exhibit ability for limited transmission between ferrets.

University of Pittsburgh - AVRIL 2017 - thèse en ligne : IMPACT OF H5N1 INFLUENZA VIRUS INFECTION ON NATURAL KILLER CELLS AND INNATE LYMPHOID CELL POPULATIONS IN MACAQUES. Journal of Applied Ecology 07/11/16 Challenging the conceptual framework of maintenance hosts for influenza A viruses in wild birds. THE LANCET 19/05/17 Stopping emerging influenza viruses at their origin. During the past 100 years, two of four influenza virus pandemics originated in Asia. Additionally, many of the emerging influenza viruses that are deemed to have pandemic potential, including H5N1, H5N6, H6N1, H7N9, and H10N8, have crossed the species barrier from animals to human beings in Asia.1, 2, 3, 4, 5, 6 One reason for this might be the extensive interface between human beings, domestic poultry, and wild waterfowl, which is generated by the high human population density, the high density of domestic poultry, and ample opportunities for domestic birds to be exposed to wild waterfowl in some regions of Asia.

Current Infectious Disease Reports 05/12/14 Avian Influenza: Recent Epidemiology, Travel-Related Risk, and Management. AVIAN PATHOLOGY - JUNE 2003 - Seroprevalence of avian influenza virus and its relationship with increased mortality and decreased egg production. JOURNAL OF INFECTIOUS DISEASE 29/10/14 How Low Is the Risk of Influenza A(H5N1) Infection? PEERJ 30/10/14 A global phylogenetic analysis in order to determine the host species and geography dependent features present in the evolution of avian H9N2 influenza hemagglutinin. Scientifica Volume 2014 (2014), A Review of the Antiviral Susceptibility of Human and Avian Influenza Viruses over the Last Decade.