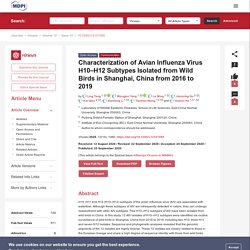 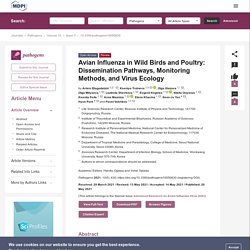 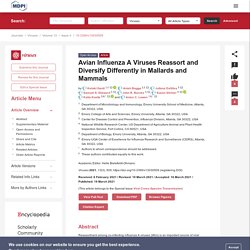 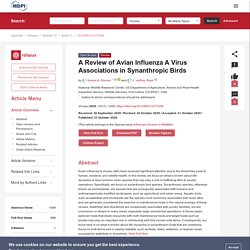 In this review, we focus on what is known about IAV dynamics in less common avian species that may play a role in trafficking IAVs to poultry operations. Specifically, we focus on synanthropic bird species. Synanthropic species, otherwise known as peridomestic, are species that are ecologically associated with humans and anthropogenically modified landscapes, such as agricultural and urban areas. Aquatic birds such as waterfowl and shorebirds are the species most commonly associated with avian IAVs, and are generally considered the reservoir or maintenance hosts in the natural ecology of these viruses. Waterfowl and shorebirds are occasionally associated with poultry facilities, but are uncommon or absent in many areas, especially large commercial operations. ►▼ Show Figures Figure 1. 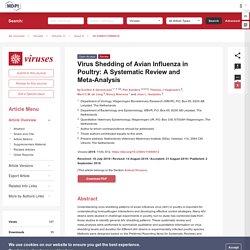 Many AIV strains were studied in challenge experiments in poultry, but no study has combined data from those studies to identify general AIV shedding patterns. These systematic review and meta-analysis were performed to summarize qualitative and quantitative information on virus shedding levels and duration for different AIV strains in experimentally infected poultry species. Methods were designed based on the Preferred Reporting Items for Systematic Reviews and Meta-Analyses (PRISMA) guidelines. Four electronic databases were used to collect literature. A total of 1155 abstract were screened, with 117 studies selected for the qualitative analysis and 71 studies for the meta-analysis. INTECH 09/06/19 Adequate Monitor of Avian Influenza Viral Infections and Foresight About Possibilities of Its Human Epidemic and Pandemic Infections. 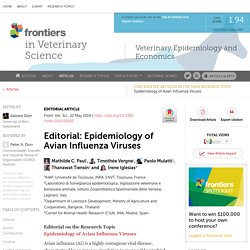 AI viruses have been the source of devastating economic losses in the poultry industry over the last three decades and have become a major veterinary and public health concern due to their zoonotic potential (1, 2). Outbreaks caused by highly pathogenic avian influenza (HPAI) viruses have caused serious animal health crises worldwide, such as the high case fatality rates in poultry, the control measures that are applied (massive pre-emptive culling or vaccination) and the consequences of virus detection on the international poultry produce trade. Undoubtedly, the rapid and continuous evolution of AI viruses make their surveillance and control particularly challenging. Timely information is required to optimize the emergency response during outbreaks. 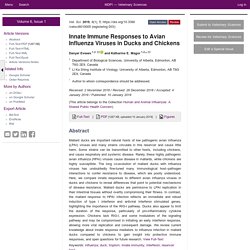 Some strains can be transmitted to other hosts, including chickens, and cause respiratory and systemic disease. Rarely, these highly pathogenic avian influenza (HPAI) viruses cause disease in mallards, while chickens are highly susceptible. The long co-evolution of mallard ducks with influenza viruses has undoubtedly fine-tuned many immunological host–pathogen interactions to confer resistance to disease, which are poorly understood. Here, we compare innate responses to different avian influenza viruses in ducks and chickens to reveal differences that point to potential mechanisms of disease resistance. Mallard ducks are permissive to LPAI replication in their intestinal tissues without overtly compromising their fitness. NATURE 15/08/18 Characterization of avian influenza virus attachment patterns to human and pig tissues. Vet. Sci. 2018, 5(1), 23; Avian Respiratory Coinfection and Impact on Avian Influenza Pathogenicity in Domestic Poultry: Field and Experimental Findings.

VIRUSES 13/02/18 The Application of NHEJ-CRISPR/Cas9 and Cre-Lox System in the Generation of Bivalent Duck Enteritis Virus Vaccine against Avian Influenza Virus. MDPI and ACS Style. 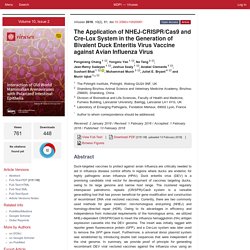 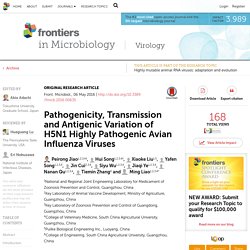 BMC 26/06/15 Avian influenza virus exhibits distinct evolutionary dynamics in wild birds and poultry. Influenza A viruses infect a wide range of animals including humans, pigs, horses, and poultry. However, with the exception of a small number of viruses recently described in bats [1],[2], wild (water) birds are the natural reservoir for all haemaggluttinin (H) and neuraminidase (N) subtypes, harbouring 16 of the former and 9 of the latter [3]-[5]. With approximately 10,000 bird species present in terrestrial and aquatic environments, the often large sizes and densities of bird populations are a boon for the spread of infectious diseases such as influenza.

The disease is caused by the influenza virus, which belongs to the family Orthomyxoviridae. Preventive Veterinary Medicine Volume 113, Issue 4, 1 March 2014, Using quantitative disease dynamics as a tool for guiding response to avian influenza in poultry in the United States of America. Open Access Abstract Wild birds are the primary source of genetic diversity for influenza A viruses that eventually emerge in poultry and humans. Much progress has been made in the descriptive ecology of avian influenza viruses (AIVs), but contributions are less evident from quantitative studies (e.g., those including disease dynamic models). Transmission between host species, individuals and flocks has not been measured with sufficient accuracy to allow robust quantitative evaluation of alternate control protocols. We focused on the United States of America (USA) as a case study for determining the state of our quantitative knowledge of potential AIV emergence processes from wild hosts to poultry.

Preventive Veterinary Medicine Volume 116, Issues 1–2, 1 September 2014, Development of an active risk-based surveillance strategy for avian influenza in Cuba. UNIVERSITEIT GENT - 2014 - The transmission of H5 and H7 law pathogenic avian influenza virus. PLOS 27/07/07 Detecting Emerging Transmissibility of Avian Influenza Virus in Human Households. Abstract Accumulating infections of highly pathogenic H5N1 avian influenza in humans underlines the need to track the ability of these viruses to spread among humans. A human-transmissible avian influenza virus is expected to cause clusters of infections in humans living in close contact. Therefore, epidemiological analysis of infection clusters in human households is of key importance. Infection clusters may arise from transmission events from (i) the animal reservoir, (ii) humans who were infected by animals (primary human-to-human transmission), or (iii) humans who were infected by humans (secondary human-to-human transmission).

Here we propose a method of analysing household infection data to detect changes in the transmissibility of avian influenza viruses in humans at an early stage. Author Summary Recent outbreaks of emerging diseases such as SARS and H5N1 avian influenza have underlined the fact that animal pathogens may acquire the ability to spread efficiently in humans. Data. ‪AVIA PATHOLOGY - 2013 - Differences in highly pathogenic avian influenza viral pathogenesis and associated early inflammatory response in chickens and ducks. RIVM - 2005 - Quantitative risk assessment of avian influenza virus infectino via water. PLOS 11/11/14 Transfer of Maternal Antibodies against Avian Influenza Virus in Mallards (Anas platyrhynchos) Maternal antibodies protect chicks from infection with pathogens early in life and may impact pathogen dynamics due to the alteration of the proportion of susceptible individuals in a population. Rev. Bras. Cienc. Avic. vol.14 no.2 Campinas Apr./June 2012 An overview on avian influenza.

UNIVERSITY OF DENMARK - MARS 2011 - Thèse en ligne : Rapid detection of Avian Influenza Virus - Towards point of care diagnosis. Bird flu or Avian flu is an infectious disease caused by an influenza A virus of the Orthomyxoviridae family. Avian influenza virus (AIV) causes significant economic losses to the poultry industry worldwide and threatens human life with a pandemic. Pandemic of AIV is the human infection caused by the appearance of a “new” influenza virus as a result of antigenic shift or antigenic drift.

CME & PD Mission The mission of the University of Louisville Continuing Medical Education and Professional Development program (CME & PD) is to facilitate the needs of physicians and other healthcare team members as they seek self-improvement through life-long learning. By guiding the development and accreditation of courses that address evidence-based medical practice and expert opinion, our goals of providing opportunities for positive changes in professional competence, personal performance and medical outcomes in patient care will be met.